Haute Couture is a small, beautiful world of dreams. The pinnacle of the haute couture world are enchanting ballgowns, worn for Society events. Now that balls are fewer, haute couture is now mostly seen on the red carpet at award shows and the cream carpet of the annual Met Gala. But the Met Gala outfits must come with a  knowing twist or be derided, and the red carpet, in recent years, comes with a side order of protest against its traditional strictures of uncomfortable high heels, overly corseted structures, and outfits which you cannot eat or sit down in. Yet even with these changing demands, millions enjoy watching what the top designers send down the catwalk in preparation for these events, and planning what their own high-street version of that might be.

Haute Couture is only made by a handful of designers in Paris. Once a designer has been designated a haute couture designer by the chambre syndicale de la haute couture, anything made in their workshop is technically haute couture: the heiress Gloria Guinness used to have her gardening shorts made by Balenciaga himself. They were white.

Haute Couture or Not Couture? 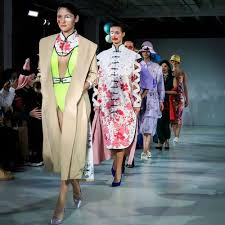 But a lot of designers, now and back in fashion’s golden age in the mid 20th century, created diffusion ranges. They were often made in a factory far from Paris’s gilded streets. A bra made for Christian Dior and bearing his label isn’t an haute couture piece; a pair of sunglasses with Saint Laurent on the arm, chic though they may be, aren’t either.

Surprisingly, perhaps, the fashion industry catwalk shows used to present a collection in fashion weeks by the top haute couture houses just show an idea of what a garment might look like. A starting point. A private client can opt to change it in many ways. A dress may be made longer or shorter; have different sleeves or necklines. It can be made in a different colour and beading or embroidery may be added or omitted. And of course, it will be in a different size.

Couture pieces, from gowns to, yes, gardening shorts, are made to a client’s precise measurements. They are initially made up in a toile, and that toile can be adjusted during fittings. When the final garment is made, it too can be changed up to the last minute. Couture garments are made with very wide seams, so that they can be let out and in year after year. Although a woman might make headlines for wearing the same dress over and over, couture is meant to last a life time. Even the richest clients choose basics that are classic enough to keep wearing years later, and of course, the quality means that they can withstand it.

A Most Delicious Shopping Spree At its peak, which was from the 1920s to the 1960s, Paris haute couture had a few hundred top houses. London couture always had about ten percent of the couturiers of Paris. It must have been absolutely delicious to be a woman of means who travelled to Paris twice a year to shop for her wardrobe for the season. Most women found a couturier they loved, or at most, two or three, and stuck with them for a lifetime. They would watch the presentation of shows (each house had regular catwalk shows, usually weekly) or have a private show just for themselves. Then they chose the model numbers they liked, and went to try them on.

There was not a sample in every size. If the client was a different size to the model the vendeuse just held the garment up in front of the client, or put her arms in to show the effect.  When the choices were made, the client needed to stick around in Paris for the several necessary fittings, which took hours for each item of clothing. I don’t expect she minded; it must have been fun to stay in a hotel for a month and do all your shopping for matching accessories while you waited, while having tea with friends and perhaps catching up on a little art.

Haute Couture – Made to Last

Depending on their taste and means, a woman did not, of course, renew her entire wardrobe each season. The fashion industry may have demanded it, but suits and afternoon dresses certainly lasted more than a year. Women rang the changes with different blouses and accessories. Blouses weren’t usually made by a couture house but by your own dress maker, who also made underwear and your children’s clothes. Some couturiers did make these, however – Lucile’s famous frilly undies and Lanvin’s lovely mother-and-daughter sets come to mind. And of course, for a very good client, pieces like this could be made as a special favour to order – at the right price, of course.

Haute couture is still available today, but it’s a very rare beast. Even at its peak, it was for a very small group of ultra-rich customers. There were a few thousand socialites, film stars, landed gentry, royalty and Society People who commissioned pieces. Far more than that were people who travelled to Paris to see the shows, but did not buy, and maybe bought something from the diffusion line instead.

Now, couture clients are very rare, but customers for designer labels multitudinous. The press have always been brilliant at showing fans exactly what each designer was up to each season. At first with drawings made at the first catwalk show of the collection. They sat in their little hard gilded seats, sketching each look furiously. Or if they got chucked out for doing that, they memorised each – and there could be 200 looks. Then ran to a cafe round the corner, pouring it all out on paper once the show had ended.

Later, designers co-operated with press a bit more. They allowed clothes to be borrowed for a photoshoot after the show, provided they were returned the next morning. Sometimes they asked for a delay on publishing in return. Now, democratically, we have the internet. We can see the whole thing live at exactly the same time as every front-seat invitee.

Eighties style is back this autumn