For next season, LFWSS19 we’re going to be wearing a nipped in blazer, polka dots, board shorts and leotards, and talking about older women, the female uprising, sex, and transvestism. Very cool, very now, very needed conversations, very good outfits. 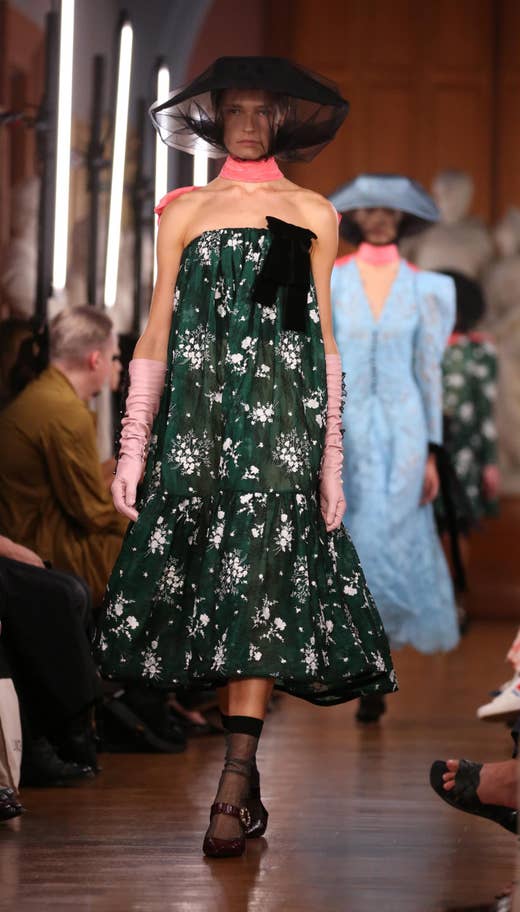 Erdem gave a clue to his theme with a portrait of my very favourite Victorian “sisters”, Fanny and Stella. Fanny and Stella lived together sometimes, when they weren’t embroiled with various lords and other men of high society. Fanny and Stella were also known as Frederick and Ernest, two dandies who liked to dress as women and flirt at the music hall and out shopping. They were subject to a high profile trial on the charge of “conspiring and inciting persons to commit an unnatural offence”and, very surprisingly, acquitted. They continued to dress as they pleased, as men or women as occasion or whim demanded.

Erdem didn’t go the full crinoline hooped skirt and ringlets that Fanny and Stella would have cooed over, but almost. Tiered floor sweeping gowns with leg o’mutton sleeves alluded to the era, along with nipped waist riding jackets, while there were some male models in the frocks as well as women – although heavily veiled, a detail which our original Victorian sisters completely eschewed, preferring their visages out and proud. 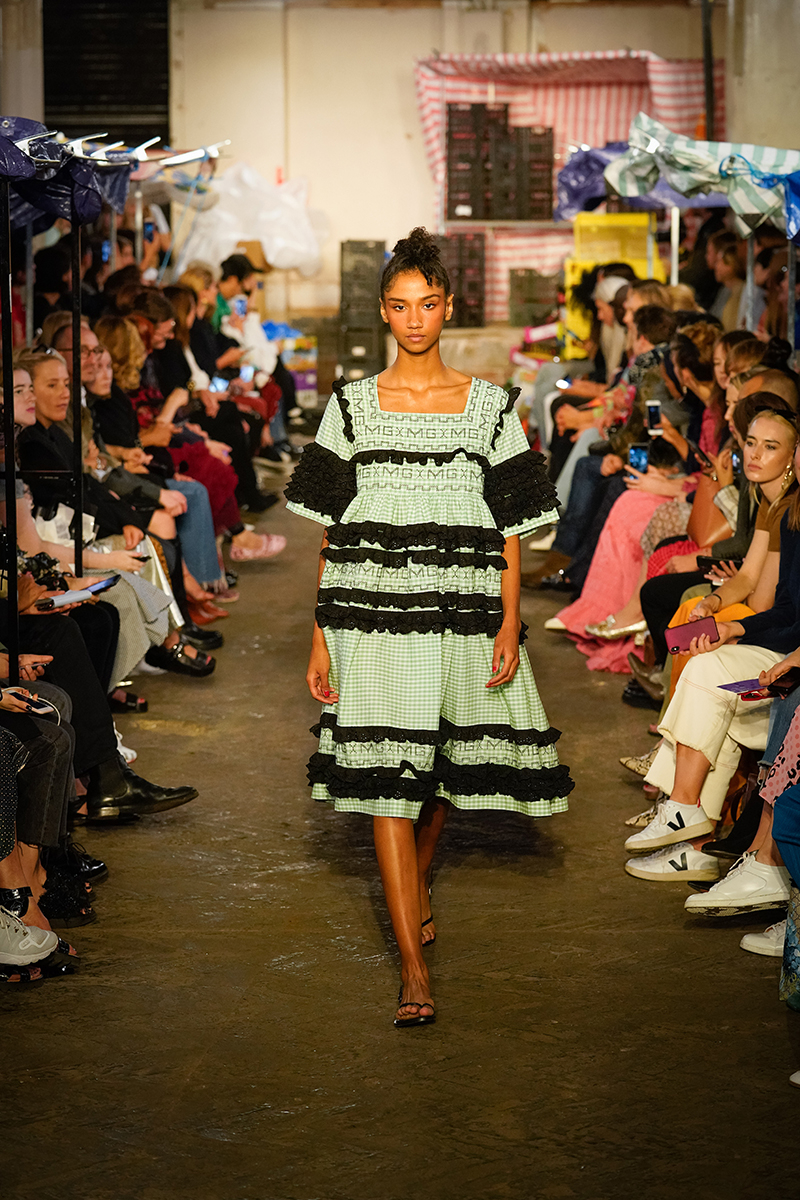 Molly Goddard’s muse this season was a woman who has “acquired a slight flush and is unsure whether it’s down to the sunburn or the cervezas, but she doesn’t care and it becomes her … she has dressed to please herself.”She must have been delighted with the costume department of runaway hit spy show Killing Eve’s decision to dress sociopath assassin Villenelle, played by Jodie Comer, in one of her signature oversized party dresses. No woman pleases herself more than Villenelle, whether that’s by wearing the latest in London couture or, you know, killing people elaborately and staring at them as they die.

This season Molly has largely moved away from tulle and into masses of ruffles, like Kenzo “The Big Silhouette” Takada in the 80s. She’s also exploring other materials and forms, with some hot pants, blazers and mini dresses in the mix. 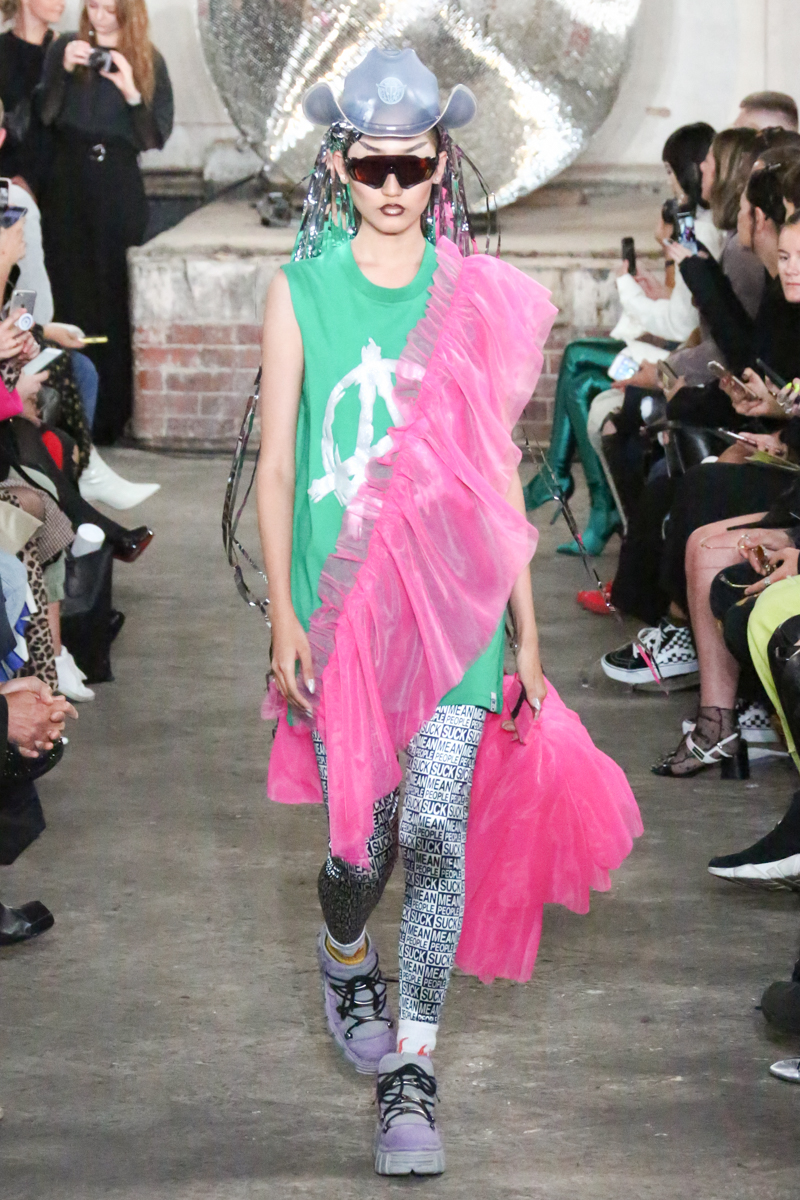 Nicopanda SS19. Image via the upcoming.

A friend of mine described the Nicopanda show as “Disco space cowboy punk trash glam sparkle”. Another said, of one outfit, “One of Baby Spice’s old stage costumes”. That was the one with the platform trainers and the pink sparkly ruffled dress, though, to be fair, it was only half a dress and strapped to a punk rock t shirt. Other outfits included neon tracksuits with walking boots, velvet one shoulder cat suits, and jersey hoodies and t shirts fountaining pink tulle ruffles. Joyful.

British designer Victoria Beckham, who has always shown in New York, made her debut in London this season. She opened her catwalk with Stella Tennant, who is (shock horror) aged 47.

Nipped, narrow lapelled blazers and floor length florals were also in evidence with Beckham, as well as narrow trousers with an ankle high front split worn under dresses. Her more familiar slouchy trousers made an appearance too, as did capelets and camisoles. The overall effect was the blend of tailoring and just-right slouch we’ve come to expect from the label. 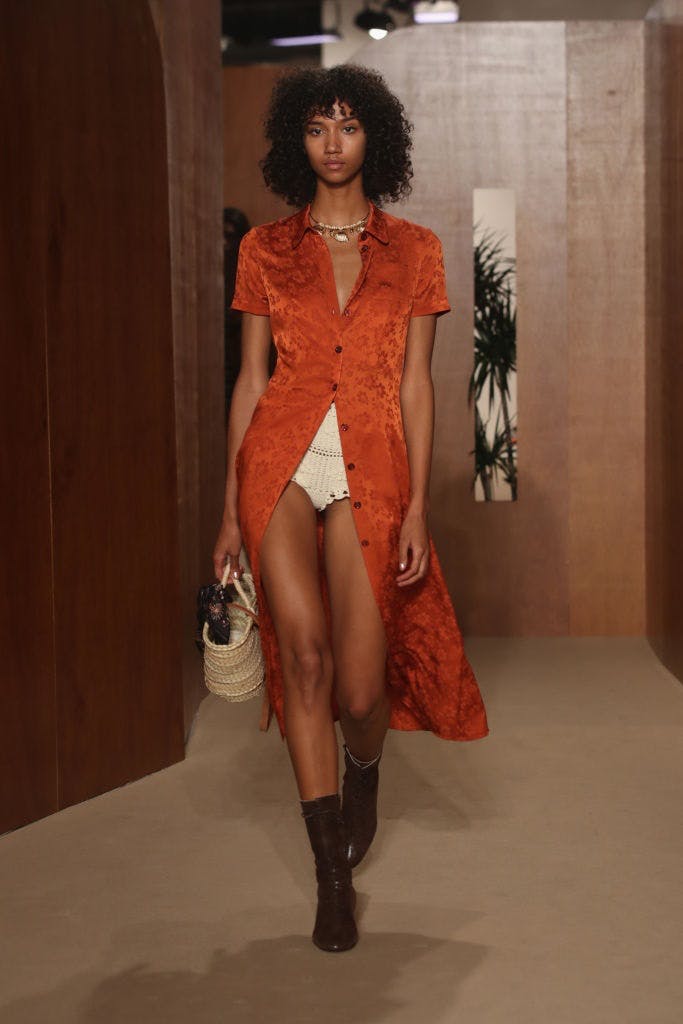 This is Chung’s first time at London Fashion Week too. Her fashion label was launched just over a year ago, and before that she had plenty of collaborations with other brands, capitalising on her own off kilter fashion sense.

I had been expecting something far wilder than this, but the presentation was polished, muted and matchy-matchy. It was entitled “Arrivals and Departures”, and the dark plywood screens with potted palms the models arrived from behind did have that 70s American airport feel, going very well with brown suede dresses and cream safari suits, from the days when one might travel in style. But it turns out the collection was “More about the emotions and feelings, and the concept of airports. Arrivals and Departures came from me wanting to explore how that much travel makes you feel. It’s about having a heightened emotional state mid-air, [feeling] isolated in a mass crowd or being observed or ignored. It’s more nuanced and not about pantsuits, tracksuits or silk pajamas. It’s actually about being influx and being aware of where you want to head and aware of where you came from.” as the designer herself explained. 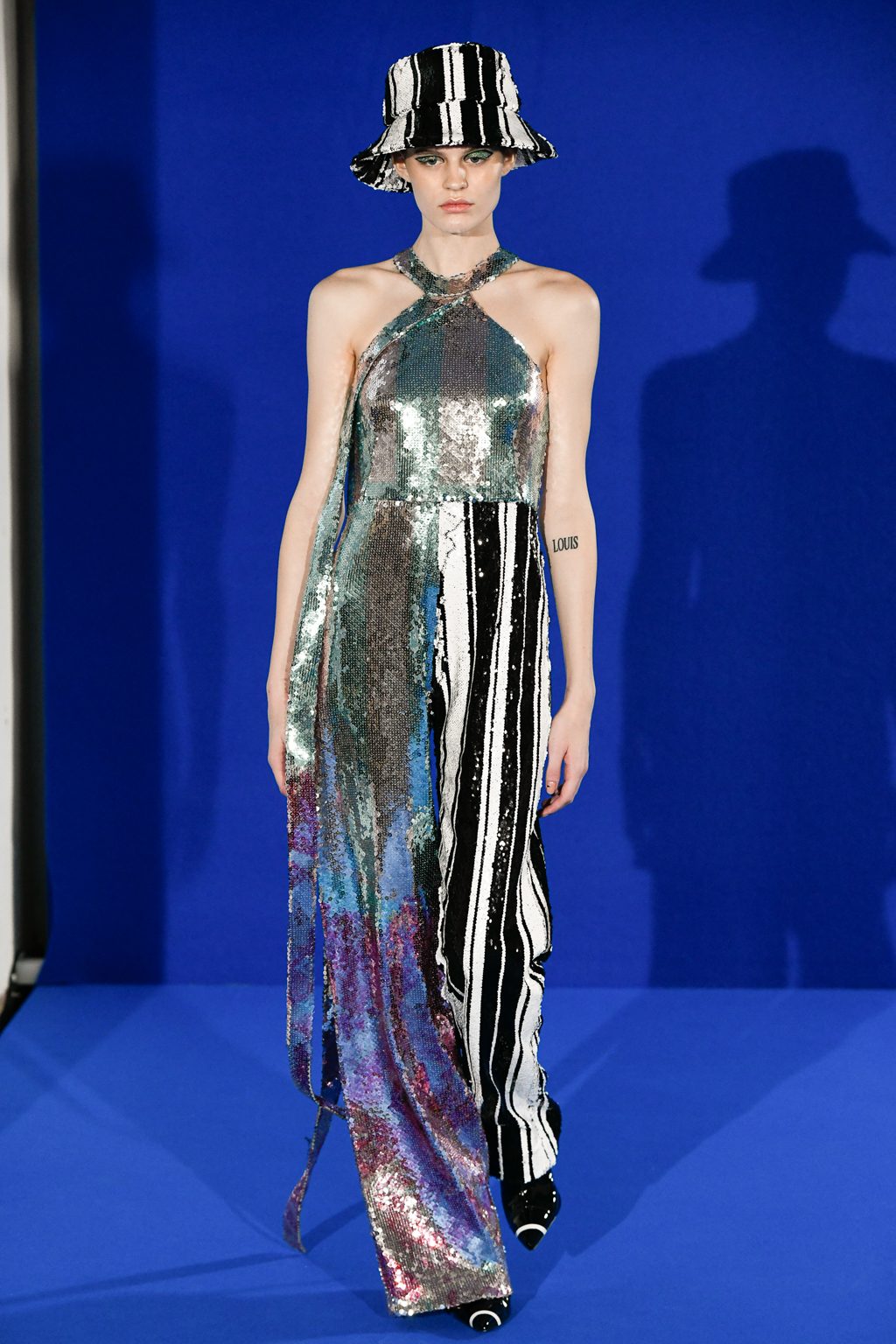 Halpern SS19. Image via The Upcoming.

Michael Halpern’s look this season was based on snapshots of his grandmother in her heyday, the 1960s.  “A time when women’s rights debates raged and the foundation was built for an American future – now at risk of reverting to everything our grandmothers fought against,” he explains. I certainly hope that she was as cool a dresser as his collection suggests – op art minidresses in primary colours sported cut outs and trouser suits in the same print had capri pants with roll necks. There was space age silver with flowing capes and sparkly shift dresses, cropped vinyl jackets in baby pink and flowing palazzo pants, some in gold lamé. Bravo, grandma! 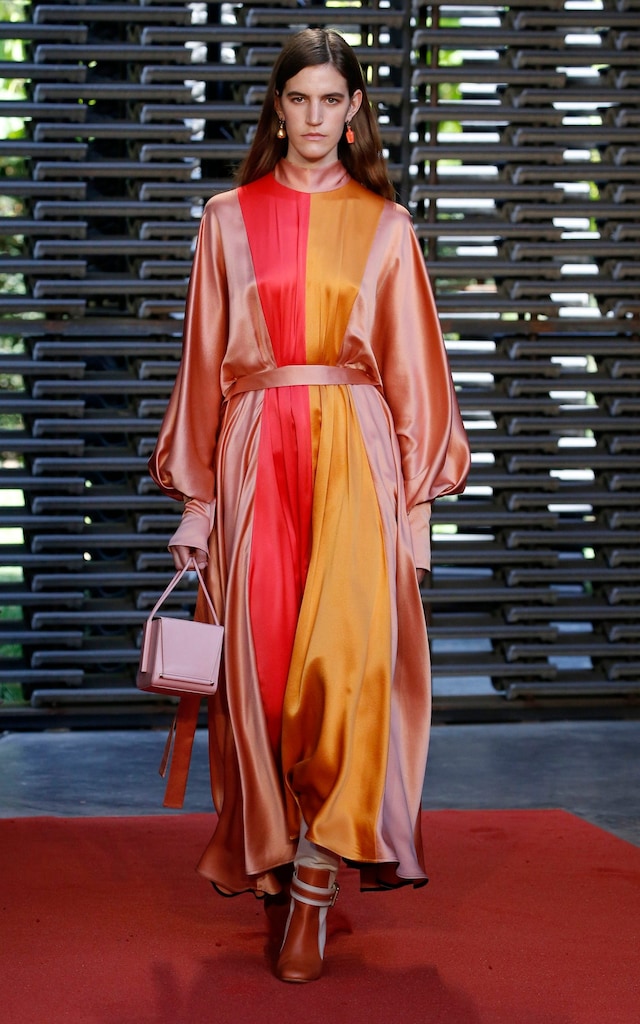 Roksanda showed in and around the Serpentine Pavilion, with a latticework of light falling through architect Frida Escobedo’s structure and dappling the models. This is fitting, since the Serbian born designer studied architecture before moving to fashion. She also showed her love of architects by taking a little known sideline of Le Corbusier, in this case the fluid line drawing designs for his tapestries, and printing them in rubber on silk tulle. Other designs included beautiful 70s stripes on silk, a turquoise, dusty pink and brown colour combo to die for, signature enormous ruffles, and that nipped waist blazer again.