The 1980s were an explosion of colour – clashing, crazy, joyful colour. Primary colours were in, pastels were in, bright, synthetic turquoises and purples were in. Combinations were zingy – for example, pink, turquoise and purple would be an ideal basis for an outfit or typical 1980s vintage shirts. Or, say, peach and yellow. Or all the colours of the Rubiks Cube. Together.

The music of the time reflected the fashions – pop music was coming into its own. It was the days when Michael Jackson was cute, not weird, when David Bowie was weird and not boring, when Madonna was sassy, Whitney Houston had soul, and Marky Mark wore his pants on show. Their style resulted in a diverse array of fashions. 1980s vintage shirts was just one of them.

The New Romantics created a trend for Byronesque frilly white shirts worn with plenty of eye makeup, modelled perfectly by Adam and the Ants.

It was a time of shoulder pads for shirts for men and women alike, and business suits and evening blouses carried exaggerated shapes. You might wear a crisp, white shirt as seem here in the film “Working Girl”, or it could be frilled, diamante studded, rushed, and possibly sequinned – and made in a colour to match your suit as seen here in the the “Dynasty” TV series.

Meanwhile for evening wear, the traditional tuxedo suit was still the norm, with a pleated or frilled dress shirt with a small collar, to be worn with a bow tie.

The decade was full of feel good films too. The Breakfast Club, with Molly Ringwood wearing her pretty pink 1980s vintage shirts stands out, as does Ghostbusters and children’s favourite The Goonies. In Raiders of the Lost Ark, Harrison Ford wore his 80s shirts open and grubby, and in Return of the Jedi it was frilled and topped with a waistcoat. In Blade Runner, his shirt was a strange patchwork of stripes and brown and brown and blue – definitely 80s, but not as futuristic as the rest of the film demands.

1980s shirts on the catwalk

The 80s were where an explosion of t shirts came in – big, baggy, colourful (of course) and printed with messages. But there were still 1980s vintage shirts around. They were big, baggy, and colourful. Check out these beauties: 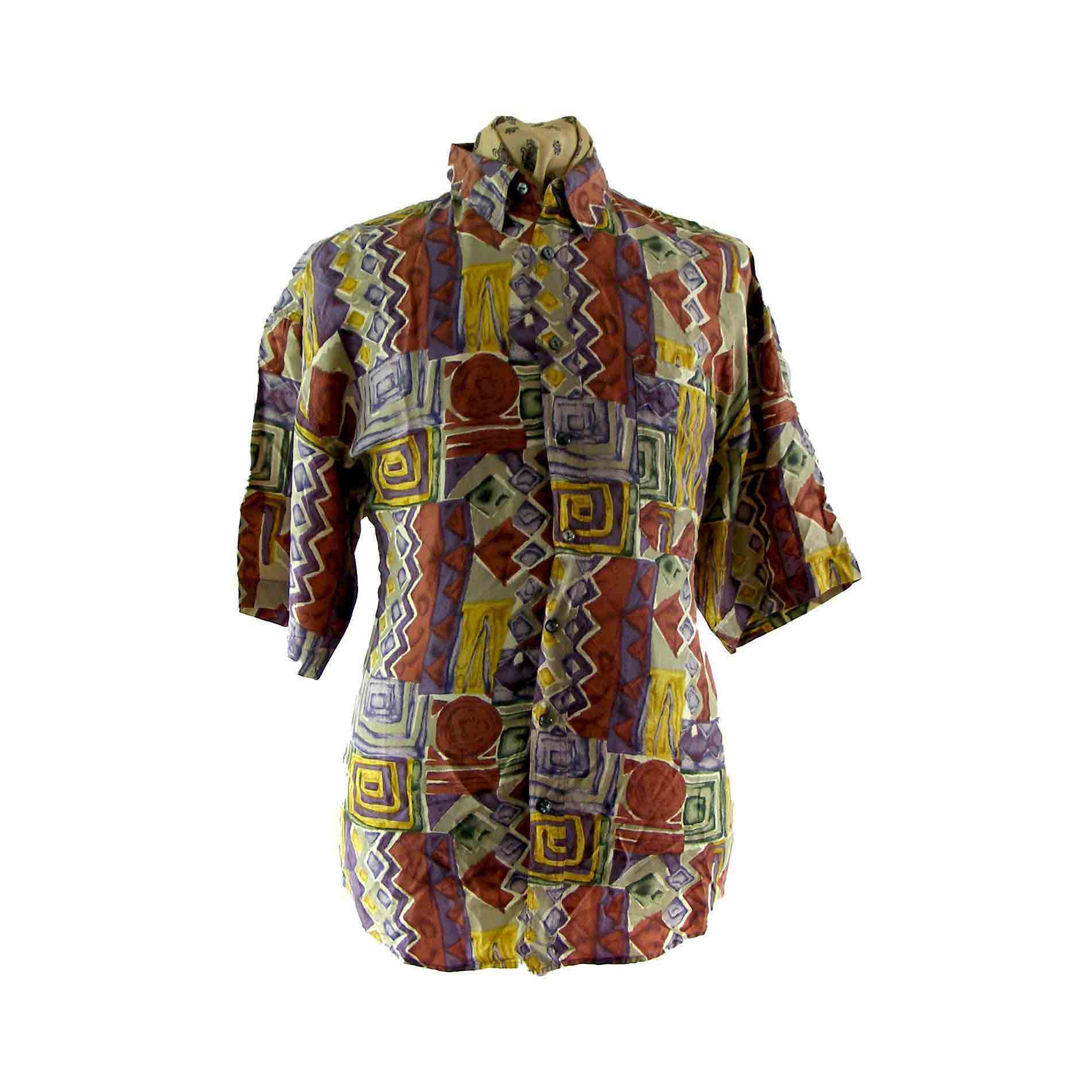 Lacoste and Ralph Lauren, meanwhile, brought in the more restrained and preppy style of the polo shirt, halfway between a t shirt and a dress shirt. It was worn in America and by people who like the American style with crisply pressed khaki trousers, traditional blazers, and v neck sweaters or cardigans.

Adam and the Ants.

80s Shirts in the V and A Club to Catwalk show. Image via V and A.