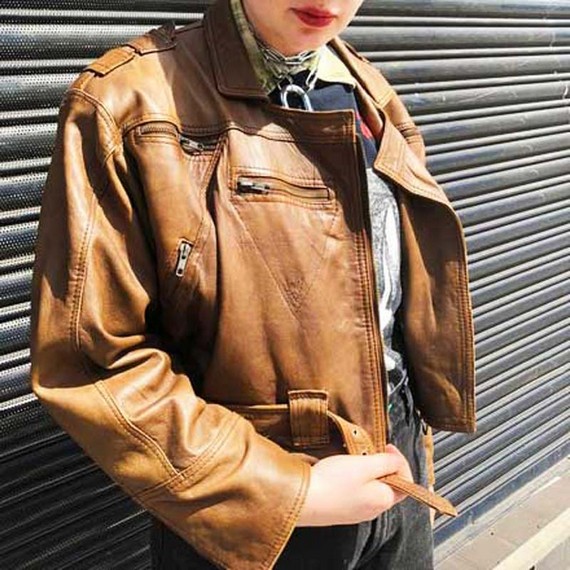 If you want to look like Tom Cruise in Top Gun (1986), go for an aviator bomber jacket. Bomber jackets were big in the 1980s, and Tom Cruise spends all of his off duty time wearing a great example with a fur collar and patches all over it.

Patches were also big in the 1980s. Tom’s must have been sewn on by his mum, because they’re very nice and neat, as opposed to the type commonly seen sewn on with red wool and enormous stitches, by teenagers who did it themselves. Denim jackets were also absolutely covered with patches too – preferably you’d get it to the stage where you couldn’t see even a tiny bit of the original leather or denim. Alex Winters as Marco shows this perfectly in The Lost Boys (1987) – a gang of vampires with a sense of style. In fact all the members of the Lost Boys had excellent jackets.

Dwayne shows us how to wear a motorbike jacket with a leopard painted on the arm. His example is actually quite restrained. The Lost Boys, despite featuring vampires named Dwayne and Marco is still one of the best vampire films around, starring lots of 1980s teen heart throbs including Corey Haim and Keither Sutherland, who is maybe better known these days for starring in TV series 24. Its tagline was: “Sleep all day. Party all night. Never grow old. Never die. It’s fun to be a vampire.”

Motorbike jackets have been popular since the 50s if you want to look cool, and their appeal hadn’t waned in the 80s. But, in true 80s style, you had to customise your motorbike jacket. Plain black was not good enough. Customisation was huge in the 80s and, as it’s a bit harder to sew patches onto motorbike leather they were often customised by being painted on – usually all over with colliding pictures like a kind of motorbike jacket full body tattoo.

Not many chose to customise their jacket the Mad Max way, with one arm torn off, by hey, there’s devoted film fans everywhere who slavishly copy their hero’s look, so I’m sure they exist. Alex Winter’s jacket was hugely copied, and another jacket that must exist in thousands of versions was Michael Jackson’s very striking red mens 1980s vintage leather jackets from his hit video Thriller. Michael Jackson was always a snappy dresser, even as a zombie/werewolf.

If you don’t want a bright red, one armed, or customised jacket, a classic of the 80s is the suede bomber jacket with ribbed collar and cuffs. It is usually available in brown or black. (worn here by Michael Nouri in Flashdance, [1983]).