You may have heard of the 1980s shell suit, but do you know who is synonymous with this look? That would be David Icke, an iconic figure associated with the 80s shell suit. 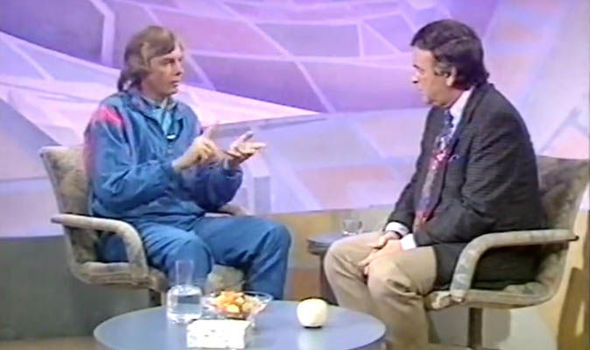 The 1980s shell suit would be perfect as a shell suit fancy dress costume at your next 1980s themed party.

This height of fashion shell suit from the 80s and 90s was made extra memorable by another well-known figure from that era – David Icke. Read on to learn more about David and how he made this track suit famous!

Then see how the 1980s shell suit was adopted by the Liverpool crowd, trend setters in British fashion, and pick up some retro style tips on the way.

Shells aren’t just fancy-dress costumes you get on eBay or other online sites. The 1980s shell suit was synonymous with David Vaughan Icke, a British football player, sports broadcaster, author and lecturer with some far-fetched theories, beliefs and behaviours, yet also a popular feature on TV shows, wearing his new-age 80s shell suit.

In 1990, Icke went through his “Turquoise period”, wearing a trademark shell suit in a vivid shade of turquoise, a colour that Icke believed conducted positive energy.

While donning his turquoise jacket and trousers, he wrote his third book called “The Truth Vibrations”, aligning his messages and wardrobe with his new-age thinking.

Picture David in all his turquoise 1980s shell suit glory, appearing on TV shows and causing lots of controversy with great confidence, not caring what anyone thought about him, his 80s shell suit or what he had to say.  This is why he is such a fascinating part of 1980s and 1990s history.

Liverpool is known globally as being a trend-setting location when it comes to style, the more outlandish the better!

Here we reminisce about the rise of the 80s shell suit and the corresponding ascent of the Wade Smith phenomenon.

Liverpool Style from the 1980s

Even though the 1980s shell suit has come and gone as a fashion trend, it is still a popular way to dress up all bright and colourful for your next 1980s fancy dress party. Retailers like Blue 17, for instance, host a range of shell suit tops that are ideal for fun dress-up occasions.

Find yourself a huge selection of 80s shell suit choices on Amazon or eBay, available in a range of prices to suit your budget and a choice of colours, fabrics and embellishments to suit your taste.

You can go full-on authentic and get a retro 1980s shell suit from Escapade, or buy a current interpretation of the trend from Party Delights at a fraction of the price, it’s your choice.

Then finish your look by adding a permed wig, name-brand sneakers like Nike, Reebok or Adidas if you can find them and a throwback boombox hoisted on your shoulder to wrap up everything ala 1980s style!

For your trainers, look for shoes with colourful stripes on the sides, preferably with a white background, for that authentic 80s style.

Don’t forget to add a gaudy headband to your wig, a big chunky chain around your neck and you could be totally rocking the 1980s shell suit ala Scouser style.

Where to find your 1980s shell suit

For an old-school original 80s shell suit, check out Etsy and browse the hundreds of options available to you. You are sure to find something that catches your eye and epitomizes your vision of the perfect outfit for fancy dress costume.

Your options on Etsy give you the biggest bang for your buck, especially if you don’t want to drop a ton of money on a one-off costume. You can also check out Amazon and eBay for other global marketplaces that offer you a huge array of shell suit choices.

If you are feeling adventurous on the style front, check out Etsy’s high quality 1980s shell suit originals from back in the day and select yourself a jacket and trousers combo in subtle, dark colours and heavy fabrics.

Now, mashup your retro originals by splitting the 1980s shell suit into its separate parts and pairing the jacket with your neutral khakis or dark wash skinny jeans, worn with a timeless white T-shirt and classic white sneakers.

Next, wear your 80s shell suit trousers with a white button-down shirt tucked in the front, white ankle booties, the trouser hems rolled up and you have yourself a classic-trendy look perfect for a night out on the town.

Your 1980s shell suit does not have to be a back-of-the-closet shell suit fancy dress costume. You actually can spin it in a modern way with what you already have in your closet, and look super cool as a result!