Iconic 80s t shirts were the epitome of style, fashion and comfort back in the day. Whether they were made from cotton, polyester or blended fabric, they were equally a part of mens wardrobes as they were in womens closets. From lightly coloured styles, to darker prints, the 80s t shirts became a symbol of freedom and casual dressing like no other garment before.

While 80 shirts are increasingly popular even today, especially as a staple outer-wear in womens ensemble and as mens sports outfits; we need to understand that the 80s t shirts actually had a very humble and subdued beginning.

What later evolved into 80s t shirts, started out in the late 1800s and early 1900s as mens long under shirts. Baggy in shape, and often longer than “usual” in sizes, these garments were one or two piece affairs that gentlemen wore under their outer casual or formal wear. 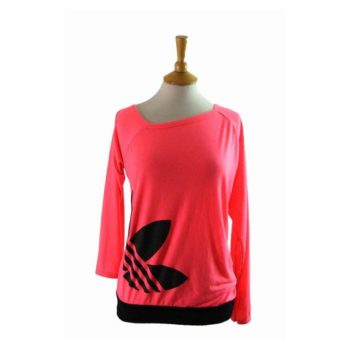 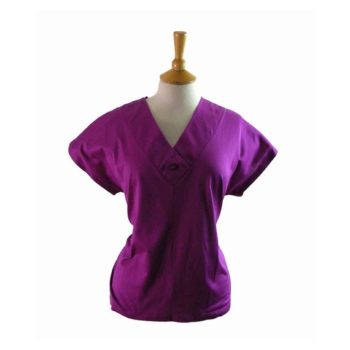 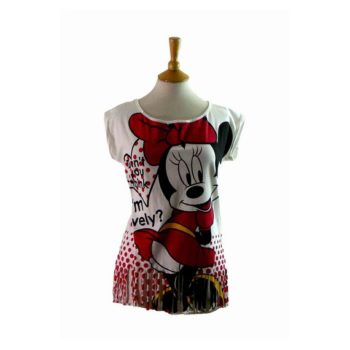 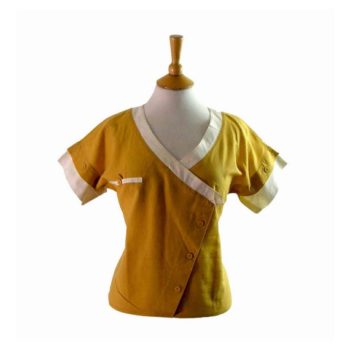 In 1902, the P.H. Hanes Knitting Company created a 2-piece mens shirt and underpants outfit made from cotton. Though the top looked eerily similar to the 80s t shirts, they lacked prints – being offered primarily in white. However, it was not until Nylon started becoming popular, in 1938, that Sears marketed what might be considered a distant cousin of the tees of the 80s. The retailer named it the “gob” shirt, and it retailed for around 24 cents.

Since that “gob”, the 80s t shirts have really come of age, transforming themselves from tees with tie-dye prints, to baggy multi- patterned coloured versions, to tight-fitting long and short sleeved printed shirts. 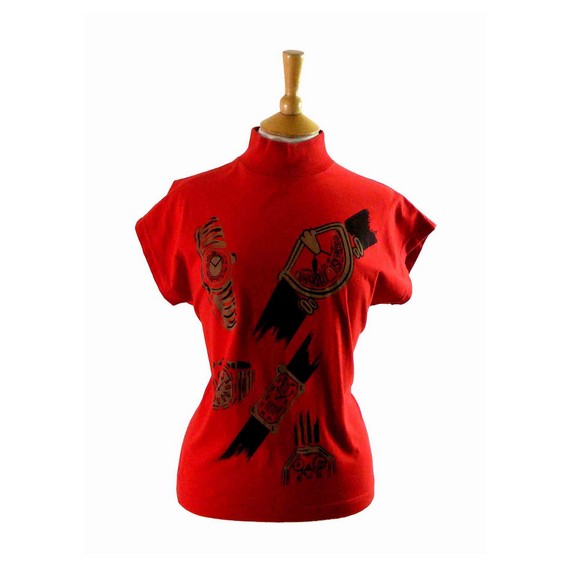 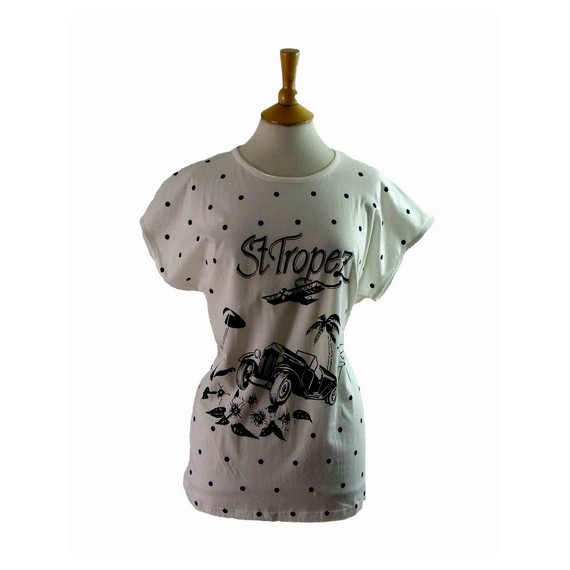 No matter what your shirt size is today, you’re likely to have several t-shirts in your wardrobe for various use – primarily as outerwear. But the irony of it is that while womens tshirts and mens shirts are worn over undergarments today, like sports bras and vests; what evolved as the 80s t shirts once used to act as undergarments itself before coming of age! 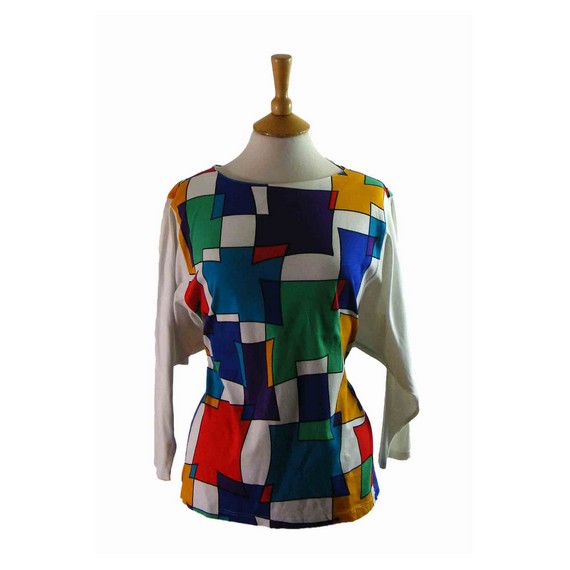 While 80s shirts are still seen today, especially amongst party goers and even reunions and family get-togethers, the tees of the 80s saw a dramatic transformation during the late 70s and early eighties. This was the generation that followed the 1960s “psychedelic gen”, where womens cotton t-shirts and mens shirts were multi-coloured neon affairs. 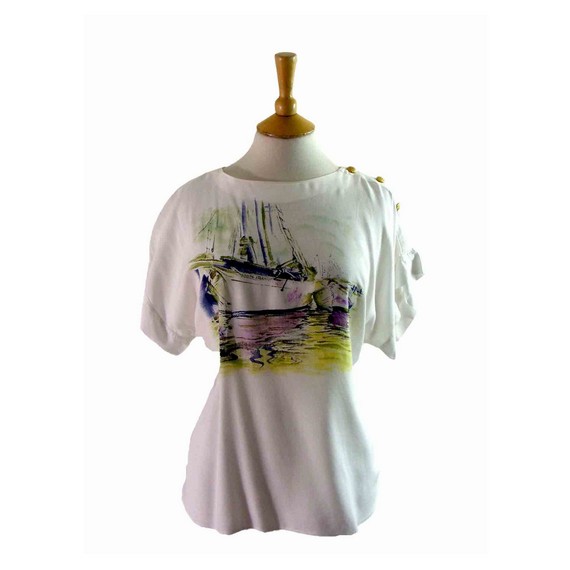 Tees of the eighties started transforming themselves when the phenomenon of customisation started becoming popular. Litho-printing was able to produce unique printed shirts in under half-an-hour; and so malls across the developed world started producing custom-made 80s t shirts for their customers. 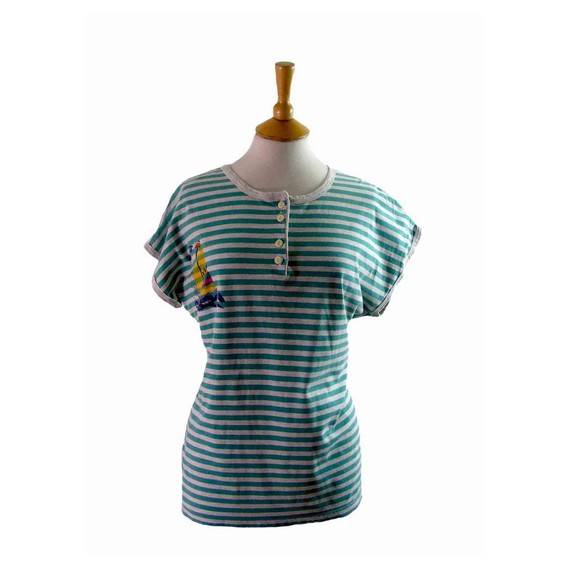 And like any popular phenomenon, a party is never far behind on the bandwagon! Rock groups and bands saw the attraction of the humble tees, and they started offering mens and womens versions of the garment with the names of their groups etched and painted on them. And with the invention of polyester-cotton blended fabric, even the corporate world joined the party, by leveraging on a womens love for wrinkle-free garments, and mens attraction to fitted outerwear.

In essence, the transformation of the humble 80s t shirt was well on its way! 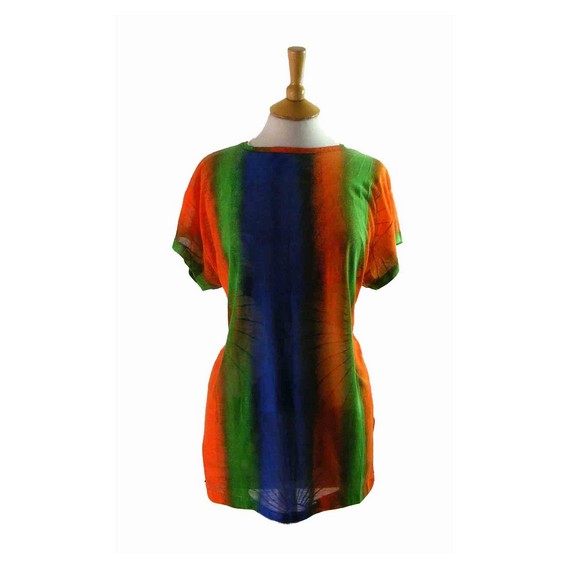 Since the 80s, the tee has continued to evolve, transform and grow in popularity. Today, whether it’s a womens printed shirt, or a single coloured mens shirt, there are new fabrics, cuts, fashions, sizes and shapes that the tshirt has taken on, including for:

While tees may have started off as being something men wore under their shirts, that garment has continued to march forward, never looking back along the way, as it changed in appearance and application.

During the 70s and 80s, and even later, a number of iconic tees have established themselves as all-time favourites: 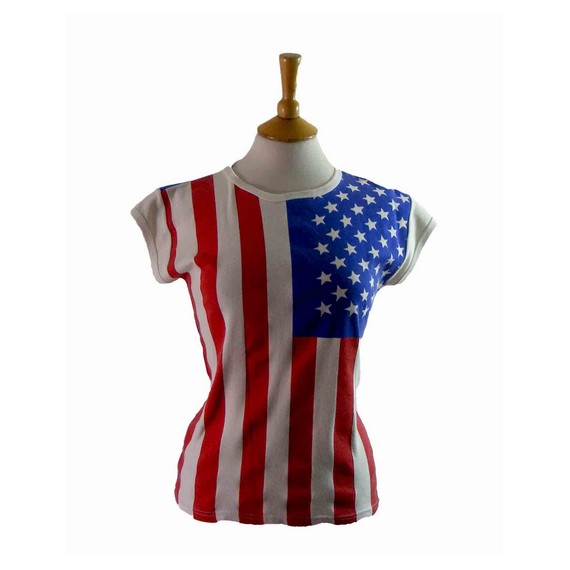 The “Choose Life” selection of 80s t shirts, produced in various sizes and shapes, was a staple of most mens and womens wardrobes 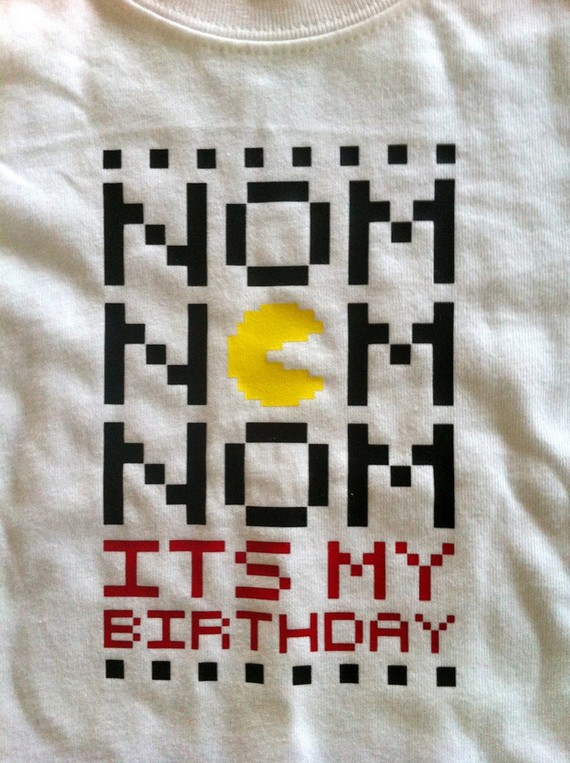 And with the advent of popular video games such as Pack-Man and Space Invader, 80s t shirts got an even bigger popularity boost. Who can forget the simple black tees, with yellow printed Pack-man figurine, and “Nom Nom Nom” printed on its front?

At Blue17, we have a wide selection of 80’s style tees, plain tees and shirts with prints. You’ll find 80 shirts that aren’t just used for casual or sportswear. Tees of that era, and many designed today that are inspired by that era, are available for men and women for formal and even special occasions.

If a woman plans to attend a party, she could find an 80s t shirt with a drawstring top, and wear it under a leather jacket and trousers. Men have the option to wear dark coloured jackets over cotton under garments, giving them a more formal than casual look.

Unlike other decades – will 80s fashion make a comeback in 2018 and beyond?

A retrospective of 80s fashion for women with wear-now ideas

Unlike other decades – will 80s fashion make a comeback in 2018 and beyond?

A retrospective of 80s fashion for women with wear-now ideas