Laurence Vail was a writer and artist whom Peggy Guggenheim, the art collector and heiress, was married to in the 1920s. She christened him “The King of Bohemia” and writes about him in her autobiography “Out of This Century” some twenty years later with a mixture of admiration and cynicism. He evidently fascinated her. She also mentions his violence, knocking her down in the street, rubbing jam into her hair in public and having rows with her that lasted for days, rushing into the sea with all his clothes on and dragging her to the cinema afterwards, only to sit shivering in his wet garments.

Of course, you might think that she exaggerates, but in his own thinly veiled account of their marriage, “Murder, Murder”, he describes a scene where the hero magnanimously decides that he will do a great thing – make up with his young wife, with whom he has been arguing for 46 hours because she did not properly appreciate his poetry.

The point of all this is that usually I like to celebrate men and women who have something great about them, not people who are violent or ridiculous. However, Peggy’s description of what Laurence wore really captivated me and I think it deserves mention:

“Because of Laurence’s exhibitionism he dressed rather eccentrically. Besides never wearing a hat and having golden hair streaming over his face, he attracted attention in various other ways. He wore white, azure blue, terracotta or beige overcoats.

His shirts were made from materials that were designed for entirely different purposes. They were of all colors, but what he liked best was to find an odd material, intended for drapes or furniture covering, at Liberty’s in London. These gay, sometimes flowered patterns, he took to the most conservative shirt makers in Half Moon Street and insisted (to their surprise) on having them made into shirts. He wore sandals rather than shoes… His jackets and trousers were a rare assortment. He wore the most conspicuous trousers he could find. They too were of all colors. At one time he had a brown corduroy suit made by one of the smartest tailors in London, but later he preferred to wear ordinary French workingman’s blue-velvet trousers that he found in the markets of Toulon. In addition, he had a large collection of weird ties.” (Peggy Guggenheim, “Out of This Century”, 1946.)

Regarding images for this post, I’ve only been able to find ones where he looks quite conventional, sorry about that.

Ahead of his time

The date she is talking about is about 1924. With his flowered shirts, Laurence is anticipating the hippies of the 60s, and his French workingman’s trousers sound a lot like jeans, which had their origins in exactly the same place – practical work trousers from France – but only became fashionable in the 50s. Laurence was stunningly ahead of his time, even in not wearing a hat. Most men, like most women, simply did not leave the house without a hat of some sort at that time.

His sandal wearing was not entirely new though – the Victorian Edward Carpenter had spearheaded a campaign to free feet from “the tyranny of shoe leather” and considered that “shoes are coffins for the feet” in the late 19th Century. 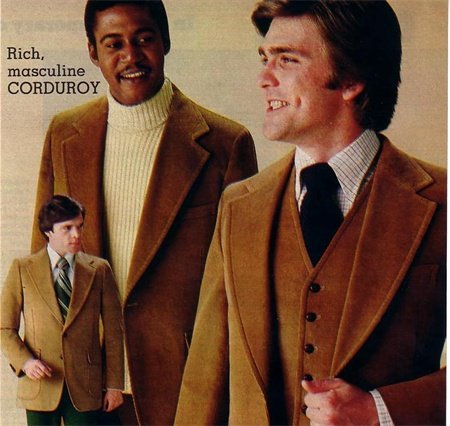 Rich, masculine corduroy suits were available in the 70s.

Wait a minute – brown corduroy suit, flowery shirt and sandals? He sounds like a cool 70s Geography teacher, actually. In a very stylish way, of course.

Of course, Laurence was lucky that he could wear these colours – white and azure blue are difficult to keep clean. You needed to be able to afford the laundry bills for this flamboyance in the days before dry cleaning. He had always had an income from his mother, even before he married an heiress, and it didn’t escape me that his shirts were made in London, his trousers in France, and that Peggy separately described having an Italian officer’s black cloth cloak with velvet collar made for him, in lieu of the sable driving cap he demanded. (“At first he did not like it, but soon he realized how handsome he looked in it with his beautiful blond hair, and from then on he favored it.”) This kind of travel was out of reach of many would-be peacocks. 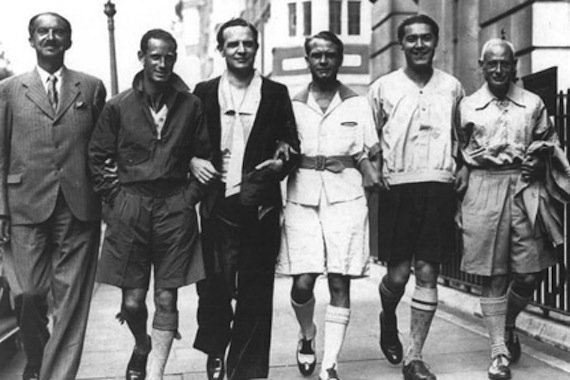 In fact, a party called “The Men’s Dress Reform Party” was formed in 1929 in Britain, which for a variety of reasons wanted to change men’s dress, to make it more comfortable, more hygenic, healthier and more beautiful. There is no suggestion that Laurence was part of this party- it seems that he was an eccentric all of his own. But their aims seemed similar to his – to break away from restrictive dark coloured suits, and to make the male body more beautiful. “…a renaissance of beauty for men – true masculine beauty of the body and mind, the bloom of a joyful spirit – might mean happier marriages, well-born and beautiful children, a healthier and more beautiful race” (Dion Byngham, New Health Journal, 1932).

They too wore sandals, although couldn’t all agree on what else to wear: “Most members wish for shorts; a few for the kilt; nearly all hate trousers. Some plead for less heavy materials and less padding; others for brighter colours; but the villain of the piece is the collar-stud. A wail has gone up throughout the land; man is clutching at his throat and crying.” (Times 17 June 1929). 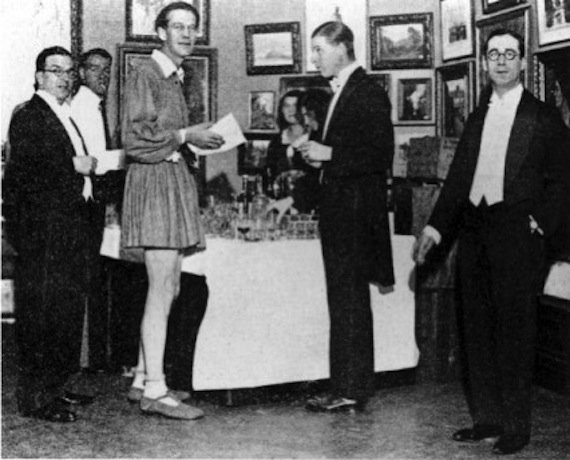 Some members of the MDRP took it all quite far and were gently ridiculed for their knees.

The MDRP held yearly rallies that became well attended, and the Coronation Dress Reform Competition held in Alexandra Palace in 1937 was covered by radio and early television, although the slant they took was of light mockery, not admiration.

For various reasons the MRDP fell out of favour beyond that event, just as Laurence fell out of favour with Peggy and they were separated (with, naturally, plenty of drama) after just six years of marriage. The divorce, difficult to get at that time, was finally granted for reasons of cruelty.

Laurence Vail, his second wife Kay and their daughter in the 1930s.

Laurence Vail, with Peggy Guggenheim and his son Sindbad. Disobligingly he is not wearing anything interesting here.

Yves Saint Laurent in 1969. There were brown corduroy trousers in the same collection. Inspired by Laurence Vail perhaps?

As an example of more usual suits in the 20s, here is Charlie Chaplin in 1924.

Ernesto Thayaht, a member of the Mens Dress Reform Party. He sports some very elegant sandals.