Vintage 1940s dresses and in particular vintage tea dresses are the very best of 1940s fashion of course evening gowns were every bit as special, but from the waist up, many of them often mimicked the upper part of a tea dress.

This was a constant feature and consisted of the upper bodice with high waist, gathered at the bust, with a panelled midriff and short sleeves, sometimes to the elbow.They were usually made of light fabric and as you can imagine, due to the war, fashion was thin on the ground.

For the first time in history the government was largely in charge of what we wore and how we wore it.

Want to find out more? 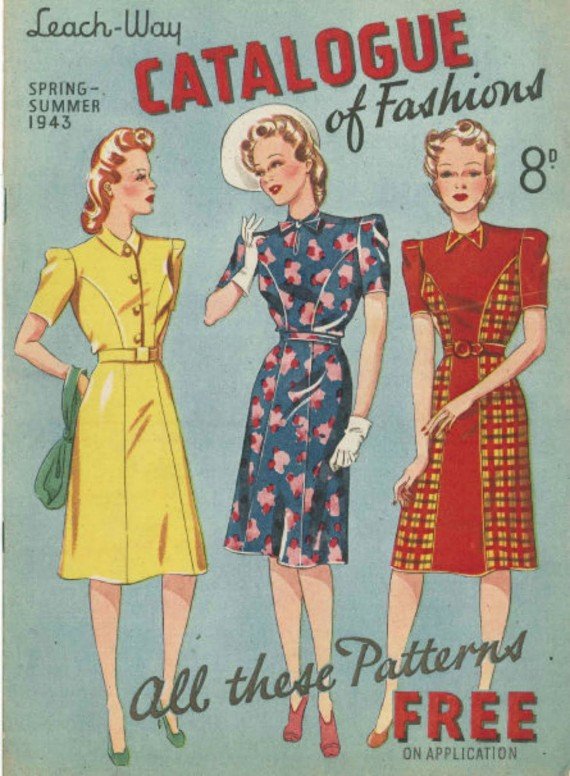 The term coined for tea dresses of course has a long history started for us by the Duchess of Bedford. A pattern of eating lunch at 12 and having dinner at 9pm meant there was a long gap between meals, and so afternoon tea was born, with snacks to keep the blood sugars up until dinner was served.

The tea dress was originally meant as purely functional, to serve afternoon tea, and was never worn outside, only indoors for entertaining.

As you can imagine, over the years, the tea dress became shorter and shorter until it became closely identified with the 1940s.

There were strict rules about what men and women wore, and strict guidelines on what could and couldn’t be used.Yes, fashion was nationalised by the government under the auspices of CC41, a logo you may find on some vintage 1940s dresses.

Creativity with what you had was crucial if you weren’t going to let things get you down and the British are a hardy bunch. 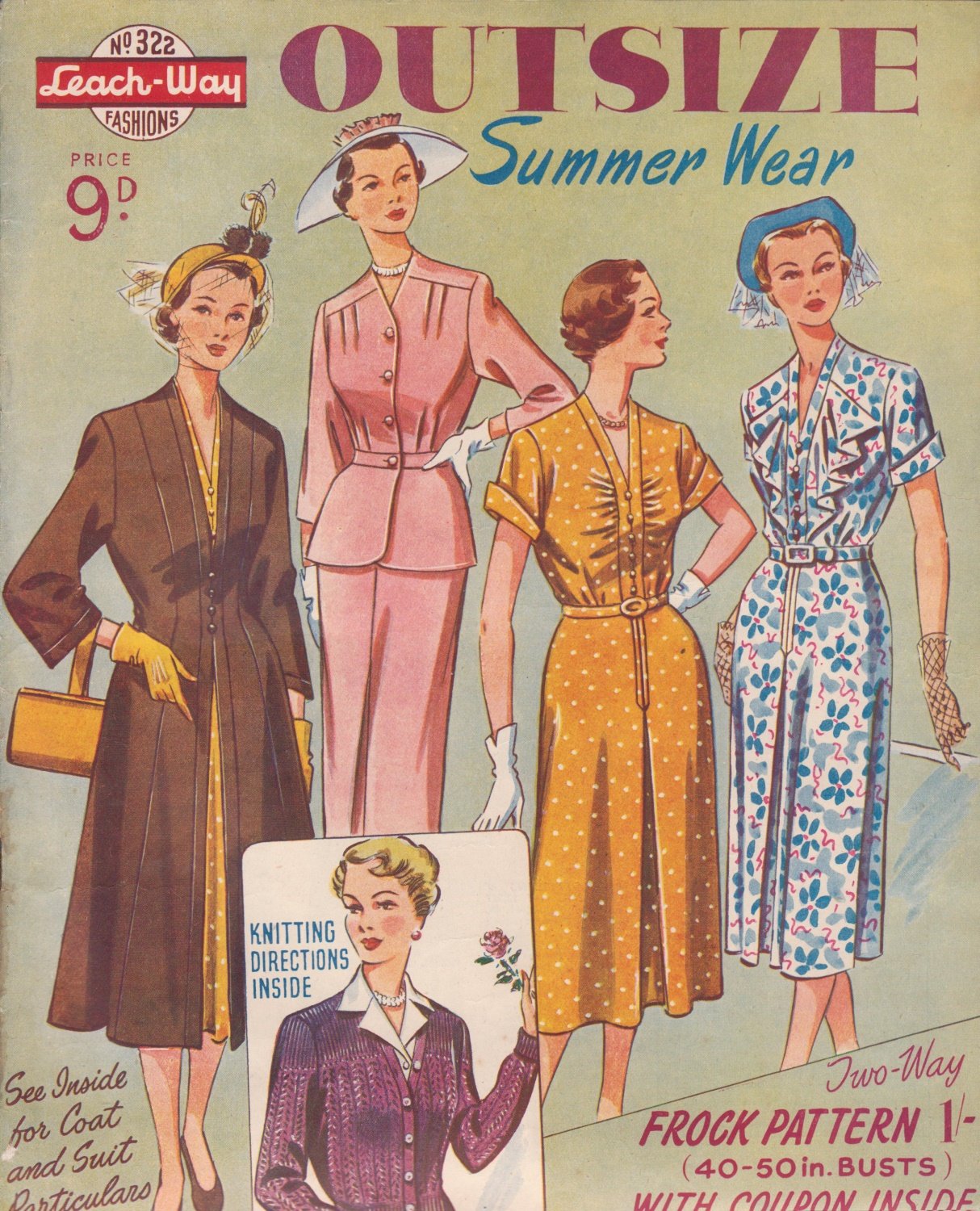 The rules were simple:-

Naturally then, there was a certain amount of imagination needed to create something pretty out of the governments utility rules.

A lot of clothes were made at home and dressmakers were thankfully both imaginative and creative with their designs.

Peplums with imaginative draping, shoulder pads and feminine gathers at the bust made for a boxy feminine silhouette.

Of course the government tried their very best to keep the spirits up by suggesting that women wore red lipstick, that would keep everyone happy. Of course, any woman who loved make-up was happy to oblige. 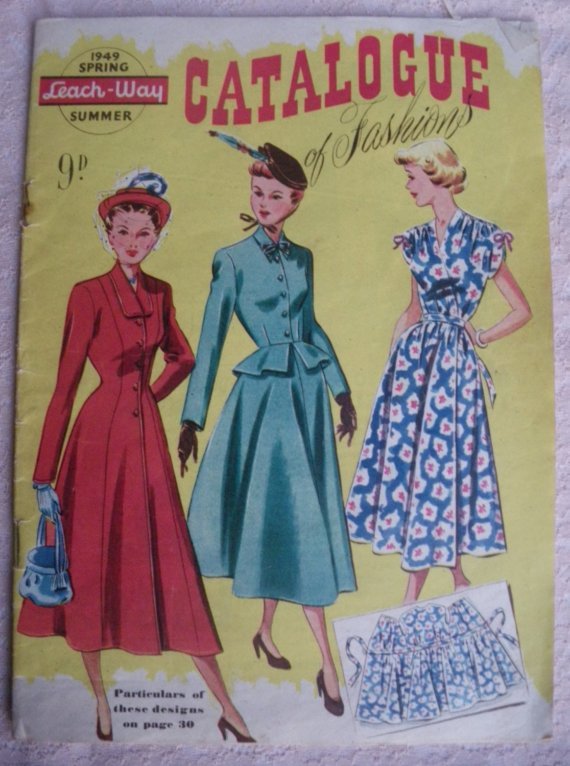 peplums, patterns and colour added something to 40s dresses

If you’re sourcing original vintage 1940s dresses then do try and look out for the CC41 logo as, although they were merely nothing more than utility clothes back then, they’re highly sought after now, and are a lasting memory of the 1940s. A really fantastically authentic purchase if you’re going to a Blitz party, or you fancy something really original.

You can always dress them up or down with contemporary accessories and hair, or go the whole hog and dress it up, 40s style, with bangs, waves, thick heeled shoes and oh, some red lipstick…just to keep the spirits up.

1940s fashion dresses carry a lot of history and charm. They conjure up images of glamour, of resilience, and of sadness.

You may find a utility dress from war-time, a slinky gown from when the war finally ended, or a handmade dress made from parachute silk or upholstery fabric, worn by a girl determined to look good and using her ingenuity to make a stunning new frock from whatever she could lay her hands on.

Vintage dresses in the 1940s 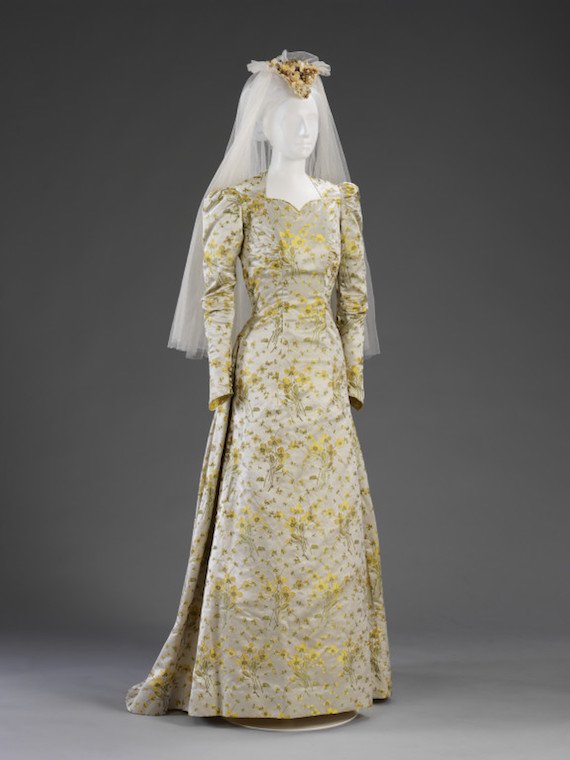 The dress above shows a wedding dress made from pretty upholstery silk, which was not rationed.

In the 1940s, both the second world war and rationing were in full swing. The government put restrictions on how many clothes each person in the UK could buy, and how much fabric each of these clothes could use. So a dress with a full skirt was out, as a full skirt, as anyone who has made one will agree, uses a lot of fabric.

Instead, narrow skirts, like pencil skirts, were in, as they used a lot less material. Small prints on fabric were also used, as they could easily be matched at the seam for less waste – not a detail that high street fashion brands really bother with any way today. 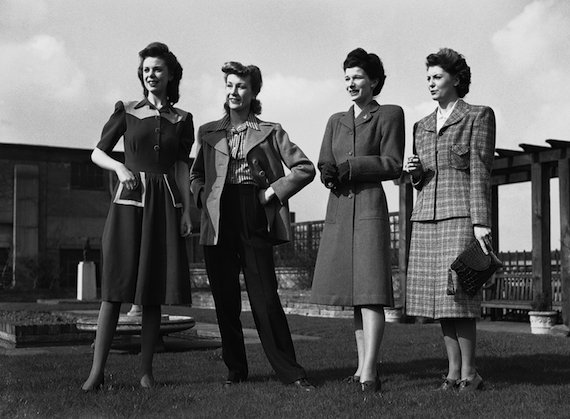 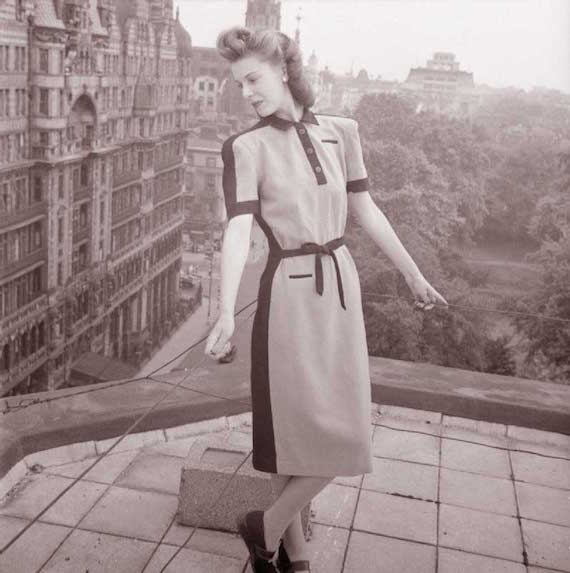 The photos above shows utility clothing designed by Norman Hartnell.

The government was able to entice major couture designers to create designs for “utility clothing” – that is, clothing that stuck to these rules and avoided excess fabric.

Norman Hartnell, a favourite couturier of both Queen Mary, Queen Elizabeth the Queen Mother, and many other royals, was one of these. At first he refused, feeling that it might harm his status, but later, as his patriotism was appealed to, he relented, and made several vintage 1940s dresses for the ready to wear company Berketex.

He was one of the designers who turned the restrictions to his advantage, making the clothes look smart and streamlined, not as if they were missing anything. 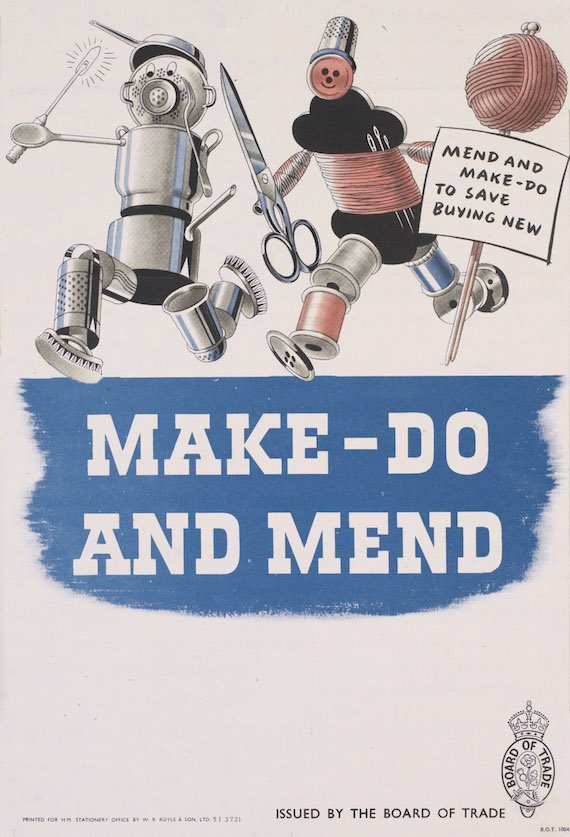 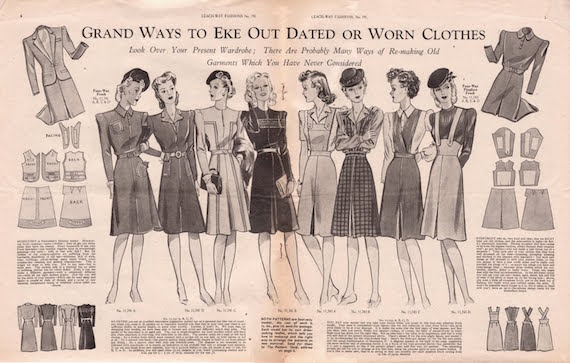 The government also encouraged “Make do and Mend” so you will find vintage 1940s dresses that are carefully darned, altered with new collars or sleeves added, or turned into children’s clothes or even household furnishings. All scraps of fabric were carefully used, as women realised that they were not sure when, if ever, they would be able to get brand new clothes. 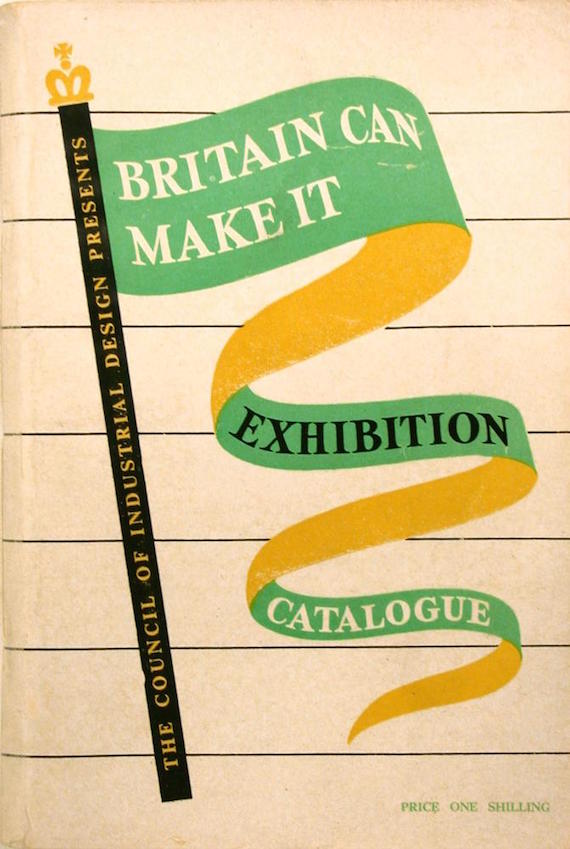 When the war ended, in 1945, it did not quite mean the end of rationing – clothes were still rationed until 1948, and although Utility regulations were lifted in 1946, they were not phased out entirely until 1952.

In the meantime, fashionistas were unsure of where to turn. Usually Paris was the undisputed capital of fashion, but could the way that British designers like Norman Hartnell stepped up mean that British fashions were just as good? Or was, perhaps, America and New York the place to look for the coolest clothes?

With this in mind, in 1946 a design and manufacture exhibition was organised in London. Entitled “Britain Can Make It” it showcased 5,000 British made goods, designed for the home market and for export, to prove that Britain was just as good, in fact much better, than anywhere else. It included clothing, both ready to wear and couture. Some of your vintage 1940s dresses might have been among the exhibits.