Carol is a beautifully shot, perfectly costumed film by Todd Haynes. An adaptation of Patricia Highsmith’s 1952 novel “The Price of Salt”, both of its stars, Cate Blanchett and Rooney Mara, are up for best actress in the Golden Globe Awards, as well as nominations for best film drama, original score and best director for Todd Haynes.

The hype is almost totally justified, as it’s a beautiful film and an interesting story. The only shame is that its leads don’t seem attracted to one another at all – there’s no chemistry. And though Carol (Blanchett) comments to Therese (Mara) “What a strange girl you are – flung out of space!” I’m not sure there’s a need for her continually wide open, staring eyes, as blank as the dolls we first see her selling in the toy department. It didn’t make me warm to her at all. 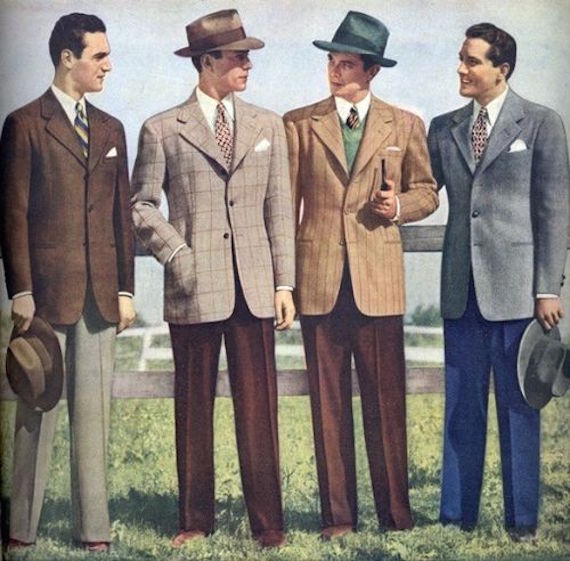 But the costumes! I loved all the male costumes in Carol, especially Richard’s, who looked like a page from a 1950s Sear’s catalogue. He dressed in casual slacks, a shawl neck jumper over a neatly collared shirt, the obligatory side parting and the loudest coat I’ve ever seen, grey with great boxy shoulders and a wide black plaid check on the front. To which he adds a red checked scarf and of course, a homburg hat. His proportions made him look just like a fashion illustration.

Terese continued the plaid theme – so much plaid in this film Carol. She appears often in a very vile yellow, red and black checked pom pom beret, which, teamed with a hooded duffle coat with some kind of knitted trim, is probably meant to emphasise how young and naive she is. Under this she wears a pinafore dress.

But even when Carol’s All Grown Up, her hair neatly transformed from a long bob with a fringe to a shaped bob tucked behind her ears with a wispy fringe, (a small change but so much more sophisticated) and wearing eyeliner that suddenly turns her into Audey Hepburn (the woman may be glacial but she’s absolutely stunning) well, even then, the plaid continues, with a ballerina length full skirt in blue and black checks, paired with a neat jacket of the same material. To break the tyranny of plaid, there is a scene where she’s at home and looks startlingly like a modern teenager, in a plain black top and cropped jeans, with little stripy socks that make her look vulnerable and young.

Of course I’m saving all my energy for Carol’s outfits. Although she is described in the book as a “New York matron” the team have resisted any desire to make Carol “matronly”, ie buxom, and instead she is slender and fragile and also much older than the book’s 35, giving her a much more tragic and solid presence than she might otherwise have had. She also seems permanently a little sozzled, a drinker and a smoker.

Her suits are so finely cut and neatly tailored that she can be barely wearing anything but a tightly corseting waspie beneath them. Her preferred skirts are slinky pencil style, contrasting with Terese’s swishy full ones. Carol has a variety of these, accessories with surprisingly brash costume jewellery including brooches and big ear clips. Her neat little hats, clamped to the back of her head, don’t disturb her perfect coiffure at all. And she has a variety of lovely swing coats of mohair plus, of course, the huge blonde fur coat that we first see her in.

All of these expensive clothes are designed to contrast her luxurious way of life with Therese’s studenty one. A shot which has been much used for publicity cleverly contrast and compares the two – Terese in her red Christmas santa hat leans towards Carol, who wears a little red hat and they almost mirror each other but they couldn’t be more different in dress.

Someone who does match Carol in dress is Abby, Carol’s ex. In fact they look like the classic lesbian “blended” pair in one scene in a car together , although I think it is mean to show how close they are in class – Carol in her blonde fur coat, Abby in a dark one, Carol in a coral headscarf and red gloves, Abby in green headscarf and gloves.

Bonus points if you spotted Terese staring at the lesbian butch femme couple in the record shop. (No picture I’m afraid but watch out for them).

A neat grey suit
A blue dress and ever present fag.