1970s blouses are a key thought for lots of fashion designers. Roksanda loves 1970s colours. She returns to them time after time. And the idea of 1970s shapes are a key theme for her. Miuccia Prada loves the quirk of 1970s prints. For her Miu Miu line, she often picks the styling and details of the period.

Allesandro Michele for Gucci has shown his love for all things 70s. He has a rock chick focus on velvets and leopard prints. And Raf Simons for his own label has done 1970s style in the past too. Many designers grew up in that decade. It has a great nostalgia for them.

For others who grew up then, it doesn’t have the same effect. Some people would not like to go back to the decade. However, others embrace it with glee. And people who never even saw that style first time around are eager to try it.

Lots of choice with 1970s blouses


But are 1970s blouses hard to pull off? Surely you need quite a daring personality to wear them? And they are not too flattering? What about those bright colours?  Most people don’t want to look like they just came from a dress up party. Well, actually, there are lots of different kinds of blouses from this era.

Which shapes and sizes?

Yves Saint Laurent made the safari suit popular, so linen blouses in beige with big patch pockets were the height of style. But he also got into styles from lots of different countries. He did “peasant style”, so popularised white cotton blouses with embroidery, with a drawstring or ruched neck. He also liked “Russian style”, and had a collection with silky blouses in burnt orange and scarlet.

He also based a collection on the 1940s. Some of his blouse shirt were translucent, and some had a very masculine cut. All of these very different trends filtered through into copies and inspiration for other mass manufactured blouses.

But a very common style, apart from all of these, is the fitted , long-sleeved vintage shirt made from synthetic materials. This style can be very flattering to a lot of body shapes. The style is usually fitted quite close to the body with long, pointy collars. They often have some stretch in them. It is flattering because the length is good, and won’t show a bare patch between your jeans and top when you bend over.

Also, the polyester fabric which was so exciting back then is still easy to wash and usually won’t need ironing. In the 1970s, just like now, a lot of women worked. They were looking for clothes that were easy to take care of. Nylon, polyester, and other synthetics were a revelation. 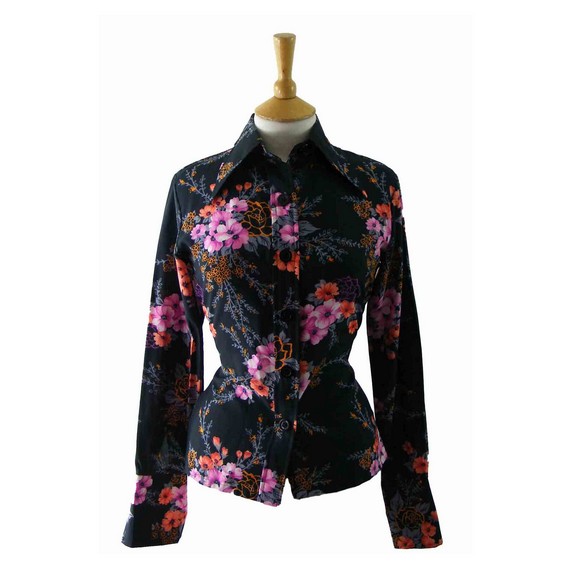 The colours that 1970s blouses come in are anything from bright primaries to plain white. The specialisation is, of course, complicated prints and patterns but the blouses also come in plain variations. The colours can also be quite subtle. Think of Missoni and Pucci, two Italian designers who had their peak in the 1970s. In a lot of ways, they are still doing the same thing today.

But although Missoni primarily work with stripes or zigzags, they can be combined in seemingly endless ways. Their colours are tonal or clashing. They like to work with quintessential 1970s colours – shades of orange, cream and brown, or tones of green. Turquoise, mustard yellow and purple are also often on their palette. Sometimes they add a black line to delineate. These tones, which are often a little muddy or “off”, are actually very flattering for the skin.

It’s good to consider these kinds of colours for your blouse tops and not just dismiss them as old-fashioned. Because a blouse is worn close to the face, you have to consider how the colour will reflect.

Strong greens or yellows might reflect into the face giving it a greenish or yellowish tint. It will probably make you look ill. Whilst pink, cream or brown tones might be more flattering. It depends on your skin tone. It can also depend on your eye colour.

Those with green eyes might try a softer shade of green, or find that brown shirts make their eyes look more brown. Those with blue eyes could try turquoise, teal or navy. Brown eyes often look good with brown, but a complementary colour like purple also makes them stand out. 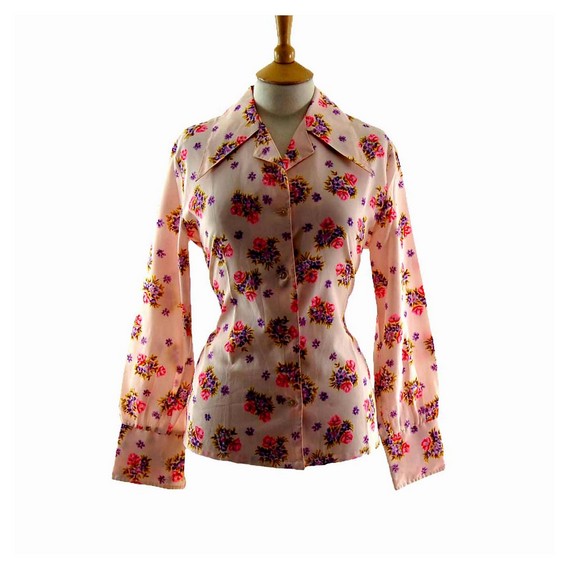 Although the long, pointed collars are the classic on 1970s blouses along with a fitted shape, there were huge variations on blouses throughout the decade. Collarless blouses, or those that tied with a thin tie were popular.

Pussy bow collars are a classic office wear shape. They tie at the neck with a voluminous bow. And so-called granddad collars were also popular for a very relaxed look – it’s a very small stand up collar.

Granddad collars were originally in menswear used as a basis to attach removable collars. It meant that collars could be taken off, and a clean one put on each day since the collar shows the dirt the most. Nowadays we would just wash the whole shirt. We also wash our necks more often, meaning collars are not usually so grimy. But when these collars were first invented, laundry was a lot harder. And baths were not so frequent.

Mandarin collars were also popular in the 1970s. They gave an exotic touch. They are similar to a granddad collar but bigger. They are often found on traditional oriental jackets and shirts. The Beatles wore Mandarin collar jackets.

You also see deep v necks and polo necks. And since there were some 1930s and 1940s vintage fashions in the 1970s, small lacy collars or other vintage looking collars are also found on tops . Frilled, pie crust collars and high buttoning collars were another variation.

It’s up to you. You can wear your 70s shirt as a single vintage item in amongst your contemporary clothes. Or, you can wear them thoroughly 70s style If you have a nylon fitted version, wear it with a knitted tank top in a contrasting colour over and flared trousers.

You can also wear it with a pleated knee-length skirt. Or, just wear with jeans and a v necked jumper on top. To make the blouse the focus of the outfit, style it down, not up. It will just be a quirky little addition.

Womens peasant style blouses can be worn with a full skirt. You can also add platform boots. If you really want to go the whole hog, style your hair in an afro and wear no makeup.

Wear your vintage 1970s blouses as a secretary would. For this, choose a blouse in silky fabric with a pussy bow. Maybe in beige.

Then, add some glasses. Wear it tucked in with a knee-length nylon skirt. Add some knee-high brown boots, with maybe a little platform. Your makeup should look quite natural. Your hair should be neat. Perfect geek chic.

For a completely different look, wear it rock chick style. Choose a silky blouse in emerald-green, with wide bell-shaped sleeves. Wear it open at the neck, then open a couple more buttons. Tuck it in. Wear it with really tight trousers, glittery platform boots, and lots of eye makeup.

Then add some extra glitter and a feather boa. This look works for all genders. For inspiration, look to Marc Bolan and his pretty blouses. 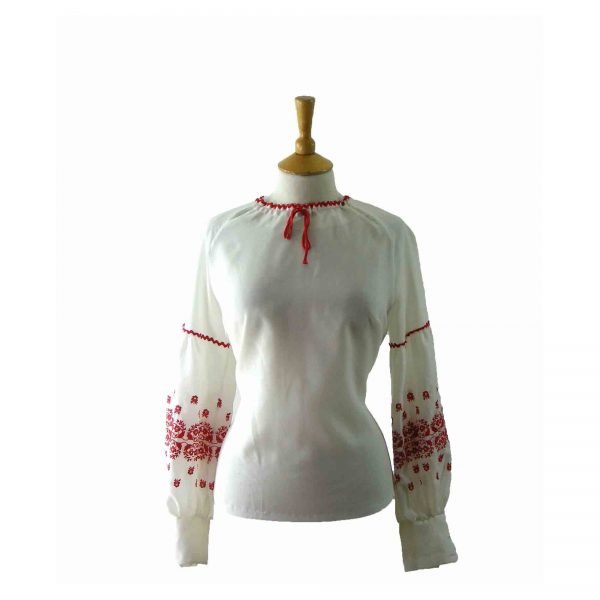 Or you can wear your 70s blouse in the style of Northern soul. Northern soul style means wearing tiny Japanese sunglasses, tight jeans, tailored blazers and great dance moves. If you’re not sure, look up Mod clothing. It’s very similar, just with its own twist.

Hippy chic would entail having a vintage blouse made out of printed cheesecloth, probably in purple.

Then you wear it with a fringed jacket of suede, patched flared jeans, and bare feet. British people would probably add a droopy cardigan too.  You can add beads and necklaces. You should part your hair in the middle and wear it long and straight. You don’t need any make up for this look.

However you wear your shirts, remember to wear them with attitude. A lot changed in the world in the 1970s. When you wear your blouses, be excited!

A rainbow of 90s tops and vintage blouses await you at our store!

The wonder of 1970s film fashion