Blue 17 is fast becoming THE shop for vintage costumes, but this week the production team behind a new film short, “Backstage Pass” came to us with a different request – they wanted the store, and not just our vintage outfits, to feature in their movie. We were only too delighted to help, and had a very fun afternoon as film groupies, watching the process.

We also caught up with Robyn Louise and the team later to chat about the nineties, friendship and rule breaking. 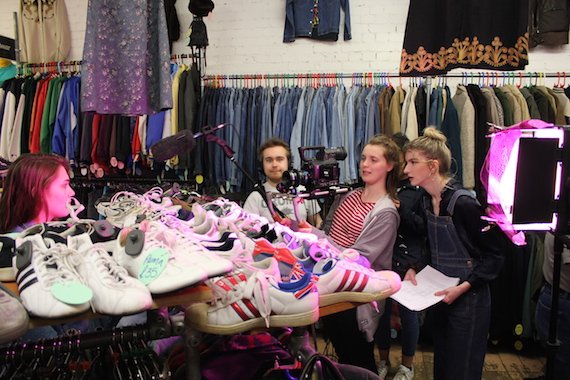 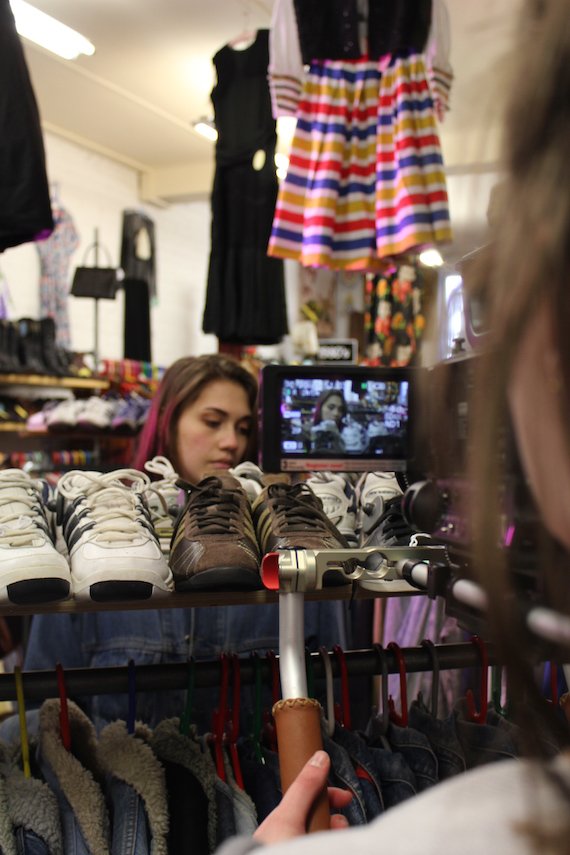 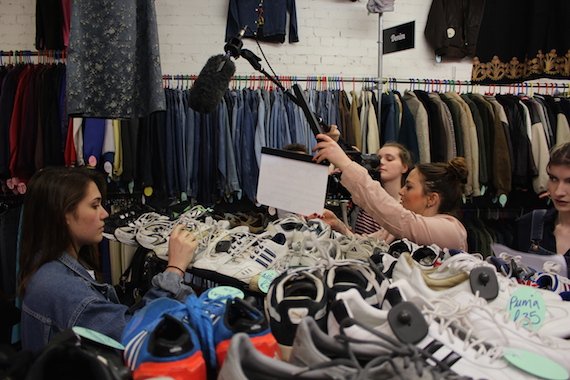 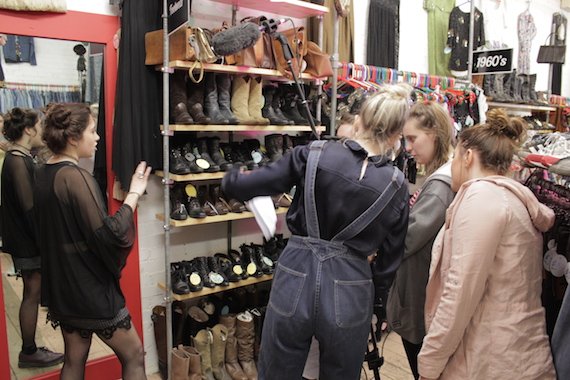 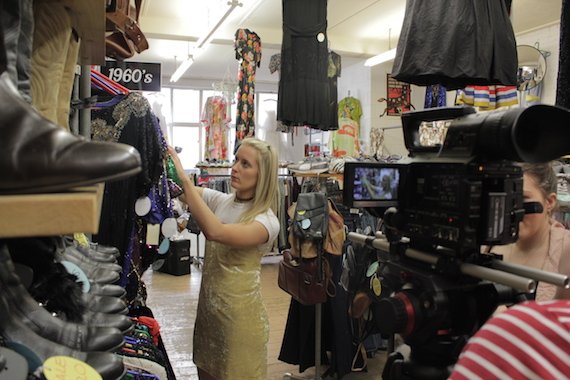 Genevieve Jones: Your project sounds great, can you tell us where you got the idea from?

Robyn Louise: Our director, Heather Williams, and production designer, Rachel Thresher, decided they wanted to create a film featuring three teenage girls, exploring friendship and girl power. This is where the idea developed from. They then decided to set the film in the nineties and to have the trio want to see their favourite band, which was initially inspired by the American rock band No Doubt.
We have since collaborated with music students Jake Few, Harrison Goodair, Sindre Deschington and Hayley Neale from the University of Hertfordshire to create a song which will be featured in the film as our fictional band Candy’s hit song. Williams and Thresher wanted to create a film that would fit in with previous teen flick films from the nineties without it being a typical teen romance, which is why we focused on the themes of friendship and rule breaking.

GJ: What is it about the Nineties that particularly appeals – why did you decide to set the film in 1997?

RL: They set the film in the nineties as it is a very popular decade with our generation: we are influenced by the culture and the fashion which means that our film will appeal to our target audience. It also made it easier for us to dress the set and find locations as many things haven’t changed much in 20 years. In addition, we wanted to create a film that was aesthetically exciting and colourful but we were also on an extremely tight budget, meaning the nineties was a good choice for this in comparison to if we wanted to set something in the seventies – finding locations and costumes would prove more difficult and expensive. The film is specifically set in 1997 because we wanted our characters to be influenced by certain films that came out in the nineties, such as Clueless (1995) for Cindy, The Craft (1996) for Ash, and Scream (1996) for Jenn. We also wanted the film to be set in the same season to when we were filming, so by setting it in April 1997 it would explain the weather and certain aspects of the girls’ clothing.

GJ: How did you devise the look of the film?

RL: We wanted our film to look fun and playful, since the climax is set around the girls breaking in and getting into the gig, making it very suspenseful and exciting. By using light as a major contributor in specific scenes, colours compliment the story and draws the audience into the narrative.

We wanted a challenge with this film, as we haven’t taken any risks on the other films we have worked on at university, therefore we explored the use of production design and lighting to make the film look more interesting and aesthetically pleasing. To add to the production design of the film, we took the initiative of hiring out a photography studio on our campus to set up a photoshoot for our fictional band, Candy, which features the actual singer of our original song. We then created posters and flyers to hang up in our film in different scenes, putting emphasis on how important the band is to the girls.

GJ: What about the costumes, in what way do the girl’s outfits get the story and their characters across?

RL: As for costumes, the clothes are definitely the largest factor in getting the characters’ personalities across to the audience, especially in a five-minute short since we cannot explore the girls’ backstories in depth. Cindy, played by Emily Schofield, is a cute, innocent, sweet girl. She wears a Candy tour t-shirt, showing that she is clearly a huge fan, underneath a yellow dress, paired with ankle socks and white shoes. Her makeup is very delicate, the blue eyeshadow complimenting her eye-colour, and her hairstyle is simple yet pretty with the small effort spent tying up the front. On the other hand, Ash, played by Andrea Hall, is dark and mysterious, therefore we wanted her to be dressed in very dark, grungey clothing. She is more experimental in the way she looks, shown in how she wears her hair and makeup. Her space buns with glitter in her parting shows her creativity, and her makeup is dark and more obvious than the other girls because Ash is more confident in expressing her alternative side. She is a strong character and we believe her outfit demonstrations this. Jenn, played by Jodie Davey, is the typical ‘cool girl’ that everyone wants to be and doesn’t have to try too hard to look good. She is fairly laid back, which you can see from her outfit. The double denim is a staple nineties look and, out of the three, only Jenn can pull it off. Her laid back ability to be fashionable and beautiful shows through her natural hair and makeup style.

GJ: Finally, where and when can we see the final production?

The deadline for our film to be handed in to our university is the 18th April, therefore we hope to upload the film to our Facebook page, https://www.facebook.com/BackstagePassShort/ , on that same day.
GJ: Thanks Robyn, it’s been great chatting with you and good luck!

Andrea Hall lives in Spain but studies Psychology at Bristol. She previously got involved with the theatre while in Spain and, since coming to England, ‘Backstage Pass’ has been her second short film. She was really attracted to the film because the crew seemed really friendly and enthusiastic about their project. She also loved the idea, the theme and emphasis on the aesthetics. She found the nineties aspect very appealing and the theme of girl power and friendship. Hall really enjoyed the experience of being involved in this film and would like to continue acting in short films in the future.

Jodie Davey has always been into drama, and has been involved with companies like Stage Coach and Theatre Train which allowed her to perform on the West End three times, once singing solo at the Royal Albert Hall. She was cast as an extra in ‘Kill Your Friends’, a film by Owen Harris starring Nicholas Hoult. She will also be starring in a BFI award winning director’s short film called ‘Price of Glory’ in April.

Davey was interested in ‘Backstage Pass’ because she loves to work with down to earth actors and crew. She loves a light-hearted story and is really influenced by aesthetic, and this film ticked all the right boxes for her. She is focusing on film in her career as she would love to expand in that certain skillset. She has had lots of theatre experience and trained at St Mary’s University London in Physical Theatre and Drama.

Emily Schofield graduated from ArtsEd in 2015. Since then, she has worked with Eastenders writer and director, Tony McHale, workshopping his new musical ‘Night at the Prom’. She has also worked with the Butterfly Theatre Company twice now, playing the roles of Lady Chiltern in ‘An Ideal Husband’ and Alice in ‘Alice in Wonderland’. In the summer of 2016, she performed ‘Catching Up’ at the Edinburgh Fringe Festival, a play that she wrote herself. She has recently filmed ‘Yout’, a short film where she played the character of Millz, an Essex schoolgirl. Schofield was thrilled to be a part of ‘Backstage Pass’ as she was born in the nineties and loves the era greatly. Looking to the future, her dream would be to be cast in a period drama.