2000s culture trends. In 1999, the world was terrified that when we hit the stroke of midnight in the year 2000, computers would not be able to cope. A computer bug would cause malfunction and wipe out systems. The YK2 Bug never hit, but since the Millennium, there have been many different changes. We relied on computers then, but we had no idea what life would be like when the internet became widespread, broadband was launched, and every household had several computers and laptops.

Before the 2000s, media meant newspapers or magazines. They were physically printed every day or every month. Of course they are still with us, but on the wane. Who would have known that social media would eclipse them?

The most popular social media website in the early 2000s was MySpace. Launched in 2003, at first it hard to know what it was for, exactly. Often the most popular users had a band or were musicians and would release new tunes to fans via the site. Other people used it as a form of public journalling. Some people used it for their photography, or art. But as there were no smartphones yet, they didn’t put selfies on there and the interface was limited compared to what we’re used to. MySpace was eclipsed within a few years by Facebook. It still exists, and has been redesigned several times but never regained its peak of popularity.

In the 80s we had Walkmans, which played cassettes, and then Discmans came along. These were personal CD players and a terrible idea. CDs are bigger than cassettes, and tend to skip when jogged. Not ideal when you’re on the move. What we wanted was something smaller than cassette players. So, a MiniDisc player? Well, it was a good idea, but even better, an MP3 player. The first of these were for the technically savvy, and could play up to 8 tracks.

Apple Computers got hold of the idea and ran with it. They designed a sleek looking, very expensive MP3 player, easy to use by everyone. Especially because by now so many people had laptops and personal computers to load their music on to, then back off on to the iPod.

Before we had mobile phones, the pager was a brief hit. Pagers were already used in hospitals, and still are. But in the late 90s and early 2000s, they caught on for personal and business use. You could send someone a very brief text message, and their pager would buzz and show it, scrolling across a tiny greenish screen. You couldn’t send a message back, so the message was usually “Call (name)”. You’d have to find a payphone to do so. But that was the beginning of being always on, and always contactable.

In the 90s, the internet was there, but a very basic novelty. There were some pages on culture, like fan pages on films, comics and books. But to look at them, you had to go to the library. Most people didn’t have home modems. It was a bit odd to sit at the library and look up your hobby. It was free, but you just got an hour. By the 2000s, the internet was taking off. But internet was dial-up, through the phone line. You could not ring someone and use it at the same time. If you lived through that era, you will never forget the sound of the dial up modem. Here’s a sample, in case you, too, want that screechy sound stuck in your head.

Internet cafes sprang up. They were useful if you didn’t have internet at home, or were travelling. Or people at home were always on the landline. It was even weirder really to sit in a whole room of people with headphones on, looking up your hobby.

Web pages became more sophisticated in the 2000s. And it was charged per minute, so you tried to keep it short. Although animated pages could be designed and film clips inserted, without broadband they loaded very slowly. 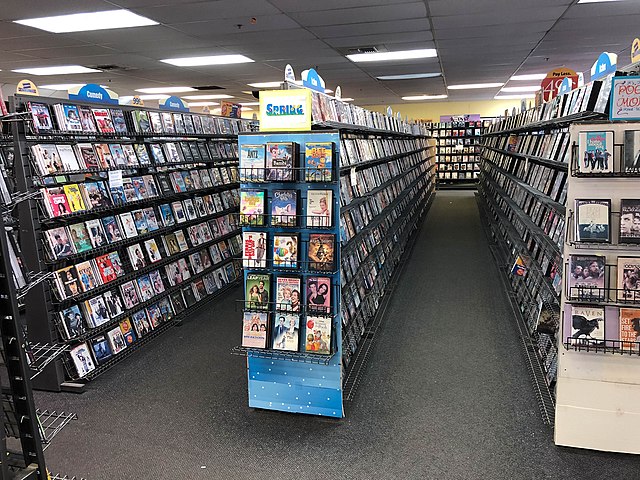 Do you remember going to the video shop to browse which film you wanted to rent, then it had to be watched and returned in three days? Or the plea on the box “Just to remind, please rewind, thanks, the end” because there was nothing more annoying that settling down to a film on the sofa only to realise that you had to spend a boring couple of minutes listening to the whizz of rewinding first? No, you probably don’t. I suppose I shouldn’t even mention the days when we in the UK only had four channels, and further back, we just had three.

Well, all that changed when Netflix launched in 1997 in the US. At first, it rented DVDs out by post (there were similar companies in the UK). DVDs, being so much smaller and lighter than videos, could be sent backwards and forwards by post easily. The way it worked in the UK was this. You were allowed an unlimited number, BUT only three at a time. You had to send the ones you had back first. Then wait for new ones to arrive. Then, when they finally arrived, wonder why on earth you chose three New Wave French films, when you really fancied a silly blockbuster. Inevitably, with the time lag, you rarely got to watch very many per month.

Then, Netflix had the brainwave of just streaming online. Their whole library of licensed rentals was uploaded and all you had to do was pick one from your desktop and laptop. It was a revolution in film rentals, and you could watch as many as you liked for a single fee per month. Best of all, you can watch whatever you want instantly, and if you don’t like it, you can pick another right away.