2000s clothing for women was about having fun and being a bit, well, trashy. There was an inevitable reaction to the very sombre 90s clothes. The minimalist flowing trousers and tunic tops in shades of bone, sand, stone, and wooden stick complemented by barely there makeup also in earth tones. One trend of the 90s was extremely child-like textures and colours: fuzzy Angora sweaters, children’s t-shirts. This strand remained and was heightened. Juicy Couture made tracksuits in child-friendly stretchy velour, in colours like baby pink, turquoise blue, or lime green. Makeup was no longer natural but as un-natural as possible. Long, long eyelashes and deep fake tans were finished off by sticky, wet-look lipgloss.

Another trend from the 90s which persisted into the 2000s was delicate camisole vests or slip dresses. The ones that looked like lingerie and probably started life as underwear. This trend has recently been revived, and is now considered an unremarkable classic. You could either go full tilt, and have a silky-lacy tiny bit of nothing with very slender straps, or have a plain cotton vest instead. These also came with spaghetti straps and it was hard to find something that covered your bra straps. Of course, tiny models like Kate Moss didn’t bother with the bra.

These camisoles, or vests, were worn under blazers for a formal yet pretty look. Or, for a casual effect, they were worn with cropped cardigans. Even smaller were bolero cardigans, known as just a bolero. Boleros shrank so much that they just a strip of fabric connecting two sleeves. When celebrities on TV started wearing them, there was a lot of peering at the telly, trying to decide how these things worked. Full length, three quarter or short cap sleeves and a back that was as wide as the sleeves, but no front panels at all. Not hugely practical in England, but quite nice when you went on holiday and wanted to cover your bare arms in the evening.

Slip dresses were still worn. Often, in a concession to the English climate as mentioned, they were now worn over jeans. With a cropped card on top. This ticked all the boxes – unexpected layering, contrasts in textures, pretty-but-practical.

Something that permitted teenagers and fashion-forward wannabes to copy the the 2000s clothing for women trends set by celebrities who were endlessly covered by the huge amount of gossip magazines was a steep rise in fast fashion. Of course a velour tracksuit isn’t expensive in itself. A company can create a knockoff with a few diamantés and sell it cheaply.

In the early 90s the rise of certain popular stores which we now take from granted – and shop at guiltily – was a novelty and a delight. Quality was actually higher then, even for clothes that were a few quid. It was exciting to be able to browse and come home with a few fun things every few weeks. Now we know the cost of that consumption, in terms of the environment, but I  still have some basics that have lasted 20 years. Over time, the quality and conditions for the workers went down.

The 2000s were the years when handbags that cost hundreds of pounds became really desirable. Celebrities were snapped on the red carpet literally holding Louis Vuitton and other designer handbags up to their faces. Never mind about the outfit – check out how much I’ve demonstrably paid for my handbag!

This was quite a coup as handbags were considered a bit old fashioned. Just something that old ladies carried. New designs like the Fendi “Baguette” bag, designed in 1997, turned the concept of a stiff, awkward handbag on its head. The Baguette was small, held right under the arm and had a shoulder strap. It was comfortable, and very secure, though it only had room for a few things. The name came from the cliché of Parisian women carrying a bread baguette under their arm. It wasn’t actually baguette shaped! Also, it was a bag-ette – a little bag. So the bag was designed with humour and also in keeping with the times, massively logo laden. The tiny evening version, laden with jewels, was really new and beautiful.

Also very stunning was Karl Lagerfeld for Chanel’s Millennium Bag. It was formed with an unprecedented shape – very structured, as opposed to the squashy Baguette, and it could only be held in the hand, not slung under the arm. But the shape was simultaneously clean space age and biomorphic. It had a strange sensuality to it, with its smooth leather, and sinuous bumps. The hinge was very clean and obvious, and stamped with a big circular logo. Following its huge success, later versions were made in knitted tweed and other fabrics. 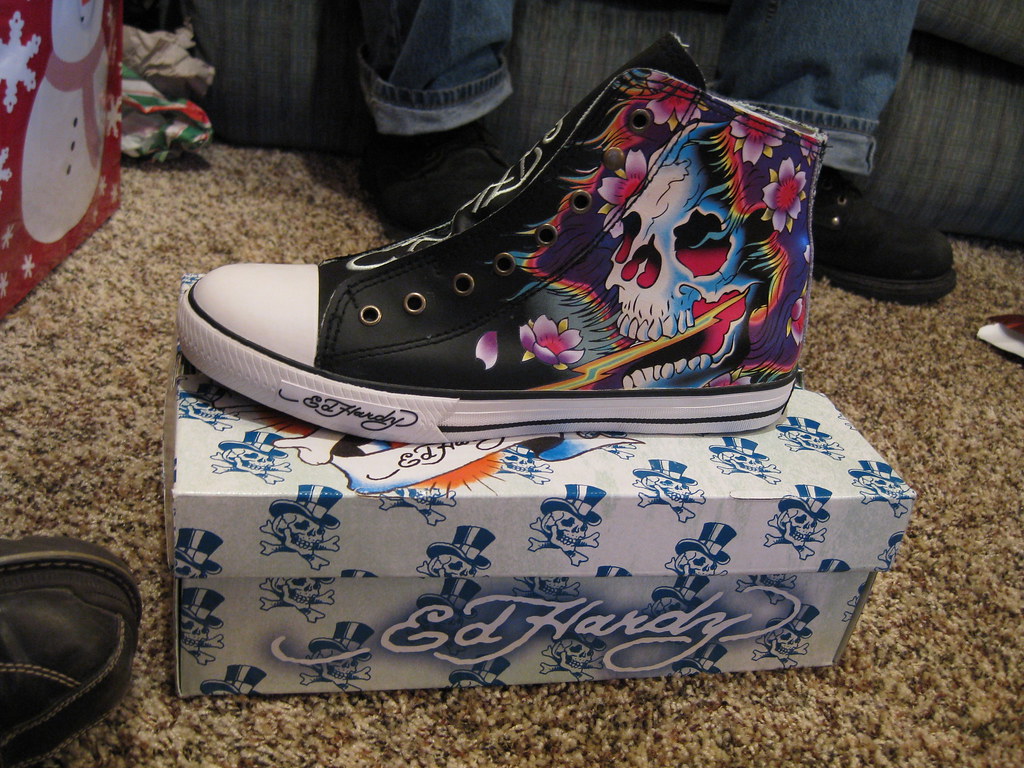 2000s clothing for women really did love their deliberately cheap looking bling, and one way to get a bit of sparkle was to bedazzle your clothes. Going on the principle of adding sparkle to something unexpected it was jeans that were the target. Obviously, denim jackets have been decorated for many years. But this is not a Hell’s Angel with grubby death’s head patches on his back. The inspiration was similar though.

The tattoo artist Ed Hardy launched a clothing range using some of his tattoo designs. These designs were quite traditional, with the blazing skulls, hearts with wings, dragons and tigers. But when embroidered onto clothes they gained new life. His designs along with his signature appeared on jeans, shoes and trucker hats, often embellished with rhinestones. After the company gave some of the garments to celebrities and they started wearing them, it became a popular look.

Circling back to those Juicy Couture tracksuits, the most in fashion thing you could do was to have your own name on your bottom, picked out in rhinestones in the same gothic font that Juicy Couture uses. And then obviously having had the tracksuit bottoms personalised, also have the Juicy Couture logo on the top half of the tracksuit. It was like your name was your brand!

I’d venture to suggest that this trend may have been kicked off by the 1998 launch of “Sex and the City” starring Sarah Jessica Parker as Carrie Bradshaw. In 2003 Carrie wore a very conspicuous name-plate necklace. It was gold and featured the word “Carrie” in script. Very quickly the entire world wanted their name in script around their neck, too.

Companies pricked up their ears and soon you could get a name-plate belt buckle in a similar style, encased in hoop earrings, or splashed across your clothing.

Ugg Boots made their fashion debut in the 2000s. At first it was inexplicable why these soft sheepskin boots, first made for Australian cattle ranchers, took the fashion world by storm. They were initially worn by Australian surfers, wanting something cosy to slip their tootsies into after cold sea water. As everyone knows, surfers are cool, so fashion people copied them.

The boots are undeniably comfy, and show a great contrast with something like, say, a denim micro-mini. This is the perfect combination as far as 2000s clothing for women goes. The brand soon took wings and spread to shorter boots, shoes and even sandals.