2000s clothing was, like any other decade, a mixture of styles, with many different looks and tribes. A lot of looks stayed from the 90s, quite naturally, as people didn’t just chuck away their clothes and replace them on the stroke of midnight yk2.

As often with styles, there was a contrast involved. The ubiquitous crop top was toned down with baggy trousers, and delicate handkerchief tops worn with jeans. In fact, a general clubbing look was a sparkly top and jeans.

Pinup, vintage, skater, and grunge looks were all out there, while a jeans gradually grew more high waisted, and necklines changed too. 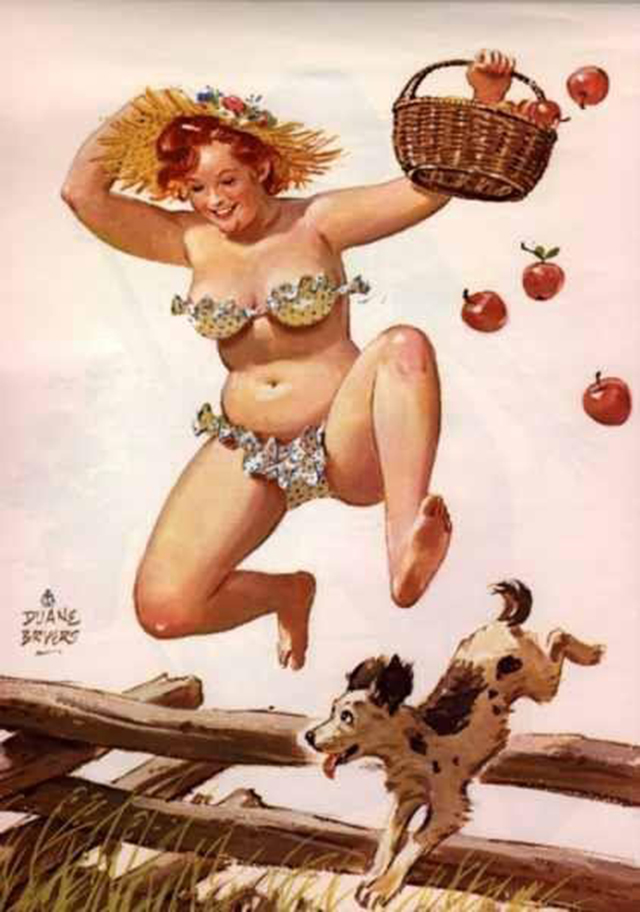 The 2000s saw a resurgence of vintage fashions, particularly from the 1940s and 50s. Burlesque became a popular entertainment. It was based on 1940s and 1950s “pinup” drawings and photos, such as model Betty Page, Hilda and the work of Gil Elvgren.

The aim of burlesque was for the performer to look beautiful and sexy in a very artistic and creative way. There was cheekiness and humour to it. It was a feminist version of stripping, often performed for other women in expensive cocktail clubs or afternoon teas, in atmospheres that weren’t sleazy or exploitative. The performer delighted in vintage makeup and hairstyles, often a Victory Roll or Betty Bangs. She or he wore corsets, stockings, garter belts, suspenders and pointed vintage style bras. They accessorised with feather boas, negligees, marabou slippers and other fun boudoir clothing. They peeked from behind giant fans.

One of the most popular and enduring burlesque performers was Dita von Teese. The Suicide Girls were a group of women who did photoshoots of themselves in a more alternative burlesque style.

Burlesque strip classes sprang up everywhere. After a while, “traditional” strippers fought back. They pointed out the athleticism inherent in their routines, and pole dancing classes became popular too. People had poles installed in their living rooms.

There was also a great popularity in vintage or vintage dresses and outfits from the same period, the 1940s and 50s. Women loved the shape, with nipped in waists and feminine, flaring skirts. It felt like such a contrast to the low waisted jeans with peeking thongs and crop tops showing a large amount of midriff that was also popular at the time.

Novelty prints with abundant cherries, strawberries and sailor stripes were all the rage. Some people liked to wear corsets and enormous flouncy petticoats to really complete the look. A lot of people were very precise about making a perfect recreation of a period look, and made sure their hair was perfectly curled and peroxided, red lips precisely painted, and waist hauled in to fairly extreme effect.

On the other hand, vintage outfits from the 70s and 80s also held sway, and a bit more of a mix n match thing happened there. Tank tops over t shirts was cute, and your dad’s polyester trousers were rediscovered from the back of the wardrobe. (My dad wore baggy corduroys, and there was no way I wanted to rediscover those.)

While Alexander McQueen’s first collection “Taxi Drivers”, introducing busters to the world, was way back in 1993, in the 2000s his inflect was still being felt. His intention was, he said, not necessarily to show the bum crack or highlight a builder’s bum aesthetic, in some sort of reference to the nobility of the working man, but to show the bottom of the spine, a very sexy area according to him.

However, the result of this was an absolute inability to get jeans on the high street that sat any higher than an awkward hip height. For many women, this meant yanking them in with a belt to stay on, which created the dreaded “muffin top” where hips and bum just spilled over in a way that felt unflattering. To prevent this showing, there was also a fashion for tunic tops, long enough to hide this effect.  For those who wanted to celebrate it, cropped tops were worn. However, most jeans were so low that just wearing an ordinary top would still reveal an inch or two of tummy, hips and back.

G strings and thong knickers were in fashion then. They often appeared above a waistline, a lot like “Calvin Klein” underpants waistbands often appeared above jeans in the 90s). Initially this was by accident, as knickers weren’t cut to be low slung to match the jeans. But soon designers embraced the look, and made G strings with diamanté straps, or butterfly features at the back. This was also the years of the lower back tattoo, which would be revealed by your low-slung trousers.

Of course there was a backlash, and that’s where “mum jeans” came in. They were the jeans from the 80s that your mum still wore, and the term was a kind of short hand for “Frumpy” that many women objected to. However, they were far more flattering than bumsters as they had a higher rise, and soon became fashionable in themselves. Finally, high waisted jeans based on original 1940s and 1950s looks came in.

Interestingly, actual 1950s jeans for women had a shape that’s quite strange to us. They were quite high waisted, but had a low crotch, which is far more comfy but a bit too baggy-looking for 2000s fashion. So high rise 1950s style pedal-pushers, capri pants and jeans during those years were more fitted to the bum.

As mentioned, baring the belly was big in fashion in the 2000s, so crop tops were in. These could range from a shorter-than-usual t-shirt, or perhaps a kid’s tee for a shrunken look, via little sports shelf bra, to just a bikini triangle bra. The shelf bra was what was meant by a crop top. Layering was cool, so you might wear a big, baggy men’s shirt over your crop top.

If you watch Christina Aguilera’s video for “Dirrty” (2002) you’ll see that one of the backing dancers wears a cropped t-shirt cut even higher than the top of her bra, so that’s one way of layering. In the UK, a crop top was usually offset in some way, so either with a loose shirt on top or baggy jeans or big combat trousers.

Baggy jeans and combat trousers were another hangover from the 90s. They were an excellent contrast to the little tops, and often had a low waistline. All Saints were famous for their many pocketed combat trousers, and a lot of other bands followed suit.

Halternecks and other necklines 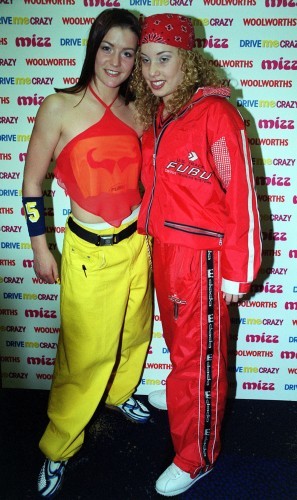 2000s clothing – the band Buffalo G. One of them is wearing a halterneck top. Image via dailyedge.ie

Halternecks, spaghetti straps and other delicate and interesting necklines were popular. A particular shape of halter neck top seemed to dominate. It was cropped (of course) with a high, bib neck and tiny thin straps round the back of the neck and tying it on in the back. It made your back look very naked.

There was something about a plain and simple block colour vest with very slim straps which was simultaneously practical yet dainty. They could be paired with anything, from jeans to lacy skirts, ad were a wardrobe staple. However, they weren’t entirely practical actually, as both styles showed your bra straps. Most people just went with it. Or you could wear a strapless bra or one with clear straps. This somewhat undermined the “I’ve just thrown this on and look great” effect, though. Avril Lavigne brought out the song “Sk8ter Boi” in 2002. It was a deep morality fable about a girl who did ballet and someone who was “just a skater boy” who gets dumped because “he wasn’t good enough for her”. Then he gets famous and she wishes she hadn’t been so shallow. Except, she’s still obviously pretty shallow, because she now wants him because he’s famous. Well anyway, he sure showed her!

Later on, Avril Lavigne shocked the entire world by disappearing for a bit, and then reappearing in 2006 with a much sleeker style. Rumours abounded that she had died and been replaced by a clone. But since she was only 17 when she did the Sk8ter Boi video, maybe, just maybe… she grew out of skater style? See also the shock and awe over Courtney Love and Billie Eilish.