Sergina is an ambiguously gendered drag queen persona who is often performed by Elly Clark, but not always. In her recent “Sergina’s Stimulatingly Sexy Simultaneous Simulation of Herself”, Sergina managed to be in five different cities simultaneously. Her work is a comment on life, love and the pressures of digital media.

The chance to interview such a nuanced yet sequinned creature was too good to resist. 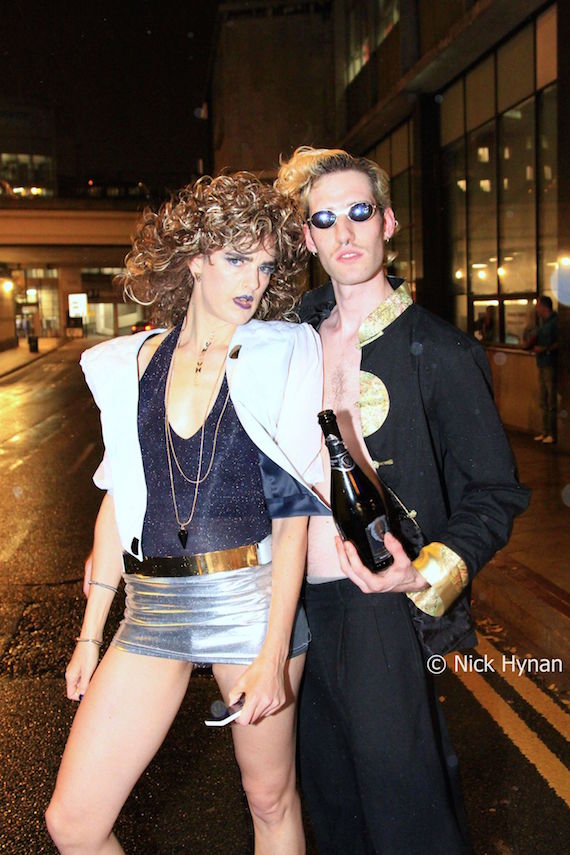 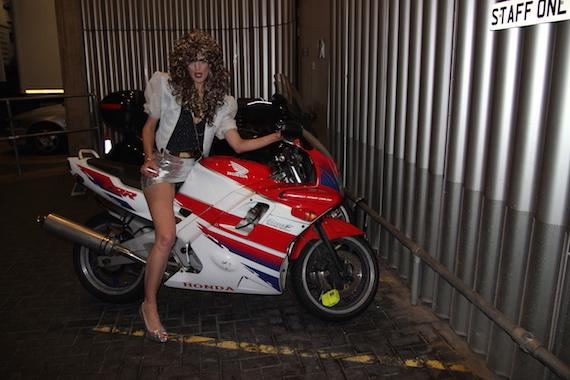 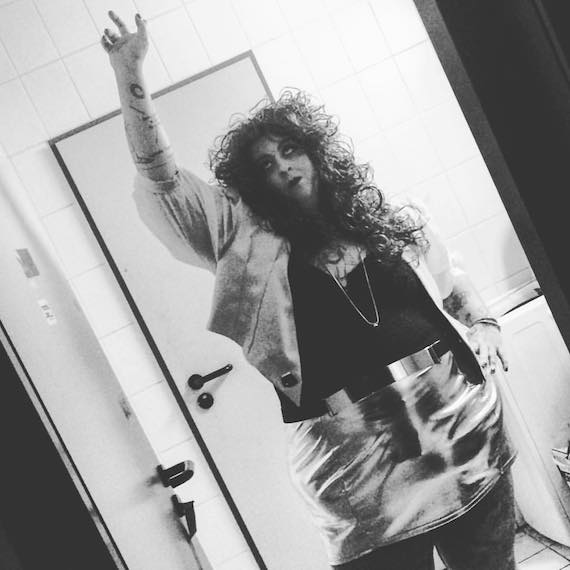 Sergina in Black and White. Photo by Dan Bodan. 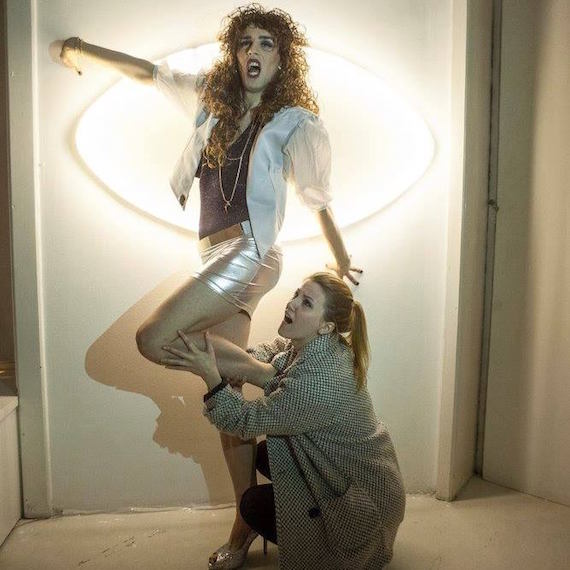 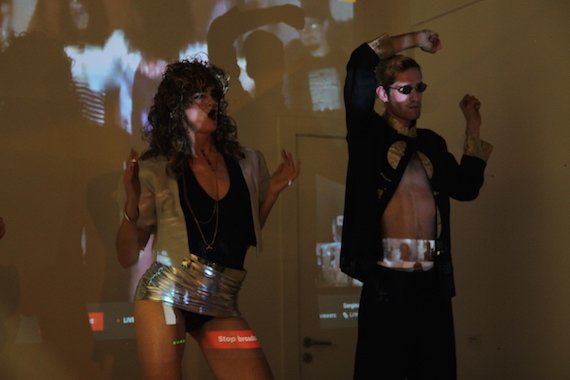 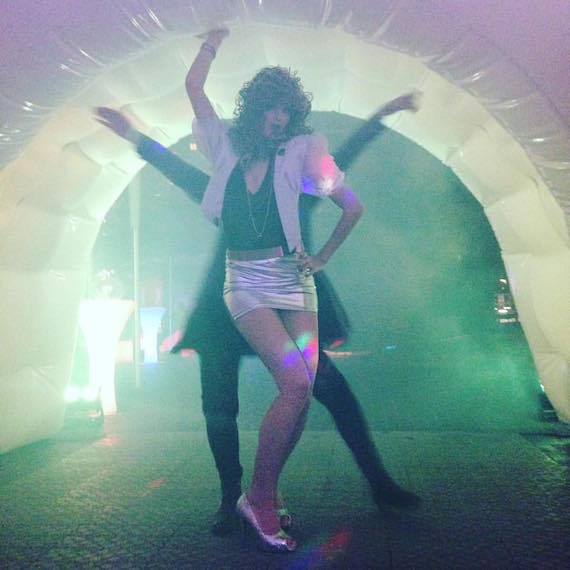 Genevieve Jones You always look so good in your videos and performances. Let us in on your secret! What are your hot tips for looking fabulous?

Sergina: Darling, it’s really about knowing the right people who can help you on your way. Know what I mean? I mean, my eyes are drawn to things that have spark, and things that shine, things that I know I will feel sexy in, and things that make other people even sexier than they already are. My hands are drawn to things that feels good – both to the hand and against flesh. So these things direct me. But quite often, I have help from Handsome Peoples who will join in, whipping my online/offline/market/and thrift stores finds into shape – and me as well sometimes. ;)

GJ Who is your favourite fashion designer?

Sergina: Next year I only want clothes in my wardrobe from Valentin Yudashkin (the ready to wear collection will do)  and Asya Malbershtein – especially her collection from a year or two ago.

More generally though, conceptually as well as physically it’s gotta be Alexander McQueen.. So sexy. So clever. So genius and I love the stories behind them.. . Such a loss.

For my last performance I had the honour to work with Berlin based Patricia Muriale.

GJ What, or who, inspires your look? Do you have a stylist? A favourite make up artist?

Sergina: My makeup artist is Roseanna Velin.. She is amazing. I love her. As for styling, I usually manage somehow. But Patricia Muriale was my stylist as well as my clothes designer for my last performance.

GJ For “Sergina’s Stimulatingly Sexy Simultaneous Simulation of Herself”, you had a number of dopplegangers. Did you give them precise instructions on what to wear and how to capture the Spirit of Sergina, or let them interpret freely?

Sergina I am Sergina no matter where I am. Geography is so old hat darling. As is the idea of identity being fixed to one person. I think we’ve got beyond that now. I have no Doppleganger – only my own simulation that can appear in many different places at once. There are just two ways you can meet me: there’s the #Sergina you can see and feel before you – on stage, in your local club, or perhaps even, if you’re lucky, somewhere more private….  And then there’s #Sergina who you can see and hear on a screen, whenever you want. Via my videos. Or Facebook or.. profiles on various websites… #GetItWhenYouWantIt.

For the performance (and thanks for asking about this!), I practiced with myself over Google Hangout across three time zones over several weeks and then performed from five different cities at the same time – simultaneously. It was fun. I had to figure out a way to be in sync with myself, to dance in five different places – simultaneously. So had to work out dance moves that would make this possible and work with the technology too – low fi it was darling. A laptop and a projector in each place, and the internet. From Monster Ronson’s in Berlin my image on stage was projected directly onto myself performing at The Island in Bristol at the same time. My performance at this swish museum in Salford Quays called The Lowry was beamed onto my body in Belgrade. And from there my image found her way across the interweb to the dark depths of Bushwick in Brooklyn. I did this in collaboration with Elly Clarke, Kate Spence Liz Rosenfeld, Raul de Nieves and Vladimir Bjelicic.

GJ About your music: who are your influences?

I am lucky to have worked with a number of people who are more talented than me in the music department.

GJ What are you working on at the moment, what can we expect next?

Sergina: I am hoping to expand the reach of my simulation, to further cities. And a video I shot two summers ago in Los Angeles will be released soon. And I am planning on shooting three more. One in Birmingham (‘Drag in a bag’) and another on a secret island where lots of peacocks live in Berlin and a third in each city I performed in last month.

Oh and next week in Berlin, at Ficken3000 I’m DJing, with Liz Rosenfeld.

To find out more about Sergina, here’s her Facebook page: https://www.facebook.com/ser.gina3