Edwardian gentlemen were not exactly peacocks. Although minute changes in Mens vintage Fashion 1900 1910 both occurred and needed to be observed, to be seen to be interested in the changing styles was considered impolite.

It was manly to be correct in style, perfectly groomed, and with immaculately clean, pressed clothes. It was unmanly to ever mention any of this.

It was considered that a man should scrutinize every inch of his appearance whilst in the dressing room – once he stepped out, he shouldn’t give it a moment’s thought.

Grooming was immensely important in Mens vintage Fashion 1900 1910 and a gentleman would ideally have a valet who shaved him, trimmed his moustache or beard, and also cut his hair, in some cases daily: barbers were also available for these services. Barbers could also help with very discreet matters such as hair dye, and tonics against balding.But these things were never loudly advertised.

Cologne was used very sparingly – perhaps dabbed onto a handkerchief, which was then passed over the hair. The hairstyle itself was short at the back and sides, but not brutishly so, and a little longer on top, and kept oiled. It was either side parted, centre parted, or swept back. 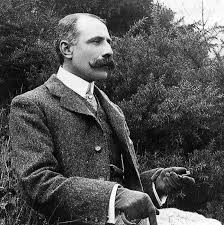 In Mens vintage Fashion 1900 1910 a man’s moustache was an important thing – youths and menservants were clean shaven but if you could, you would grow a walrus moustache, which was waxed into shape, sometimes dyed, and always neatly trimmed.

It was cared for like a cherished pet, with a small net kept over it at night, and even the invention of the moustache cup, which featured a special rim to protect the delicate creation from tea stains or melting in the hot steam. An older man might sport a full beard along with his moustache. Side whiskers might also be adopted.

Outfits throughout the day

Men had different outfits in Mens vintage Fashion 1900 1910 for different times of day. In the day time, layers consisted of a frock coat, over a double breasted waistcoat, a shirt with detachable high collar, and either striped or matching trousers.

British tailors were considered the best in the world, although the rather racy American styles (coloured stripes on shirts!) were permitted on holiday or for sports. 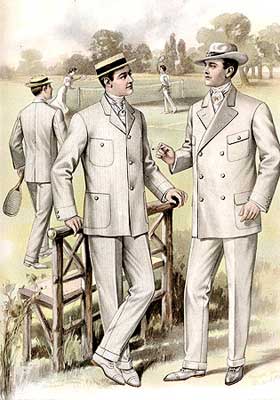 Sportswear in Mens vintage Fashion 1900 1910 was worn according to the sport played, and outfits were not interchangeable. Knitwear began to be worn for cricket, a style of jumper still popular now.

For evening wear it was black and white only.

In the evening at home you could relax in a smoking jacket or a dressing gown. Although both these garments were structured (no lounging around in terry toweling dressing gowns here) they were made of a more flexible fabric, usually velvet.

They both often featured braid frogging, for a military touch. A man might let his inner dandy out here, as they were often in rich jewel colours, with embroidery. A matching smoking cap with extravagant tassel went with them. 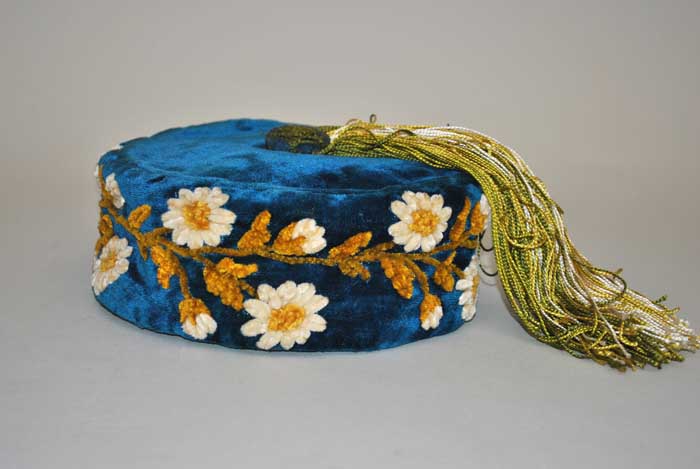 To become an Edwardian gentleman: oil and side part your hair. Grow, or acquire a bushy walrus moustache. Add a straw boating hat, a cream linen suit, and a high collared shirt. Finish with white brogues. You are an Edwardian summer sportsman, off to play cricket! What –ho!