Bowie is constantly shifting, but his style can be broken down into four of his most recognisable and influential looks. Each of the key looks possess a decisive aesthetic as well as his trademark other-worldliness: he is either an alien from another planet, a vampire, or a detached stranger coolly observing mankind from the outside. While some of his outfits (like the Pierrot, or the hairy elf from Jim Henson’s the Labyrinth) are best left for Halloween, these four have been repeatedly embraced by style icons the world over.

Records: The Rise And Fall of Ziggy Stardust, Pin Ups 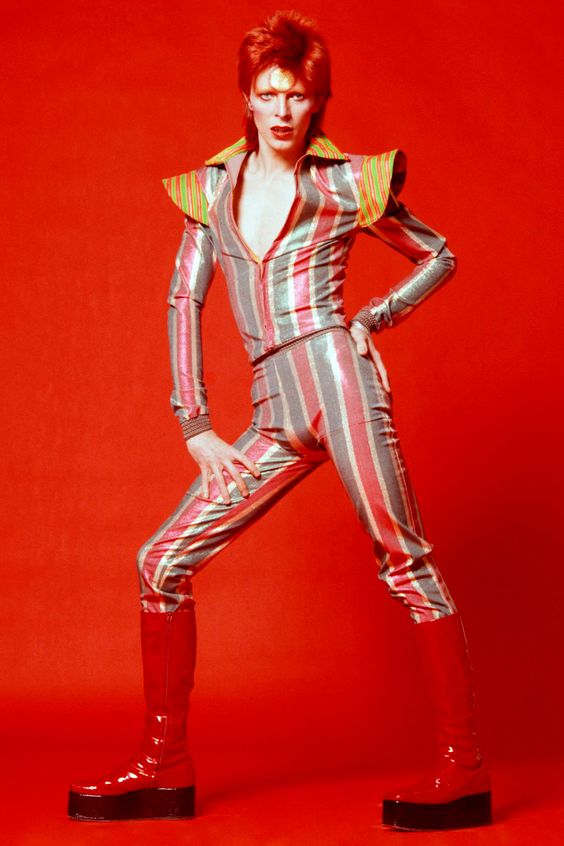 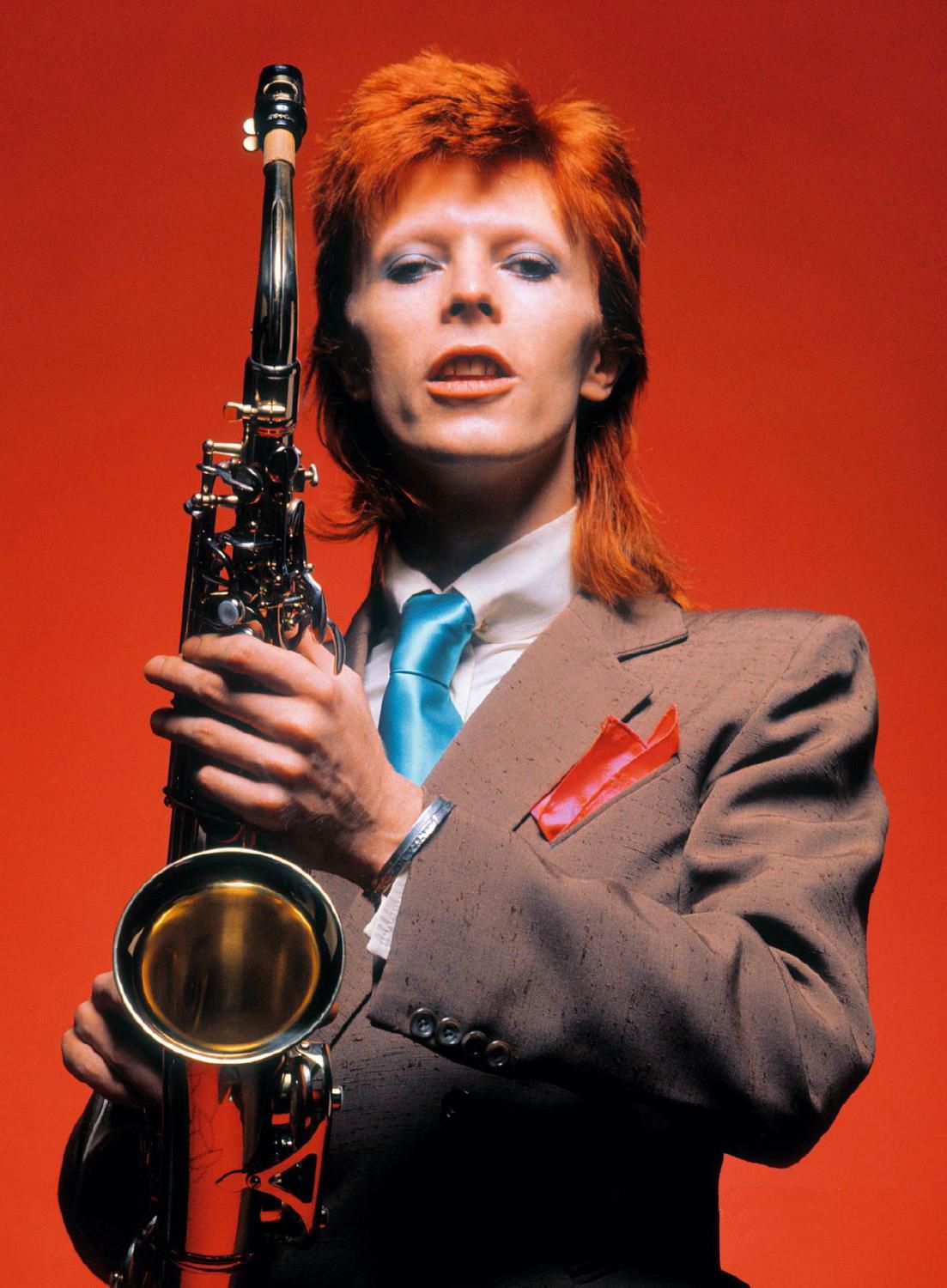 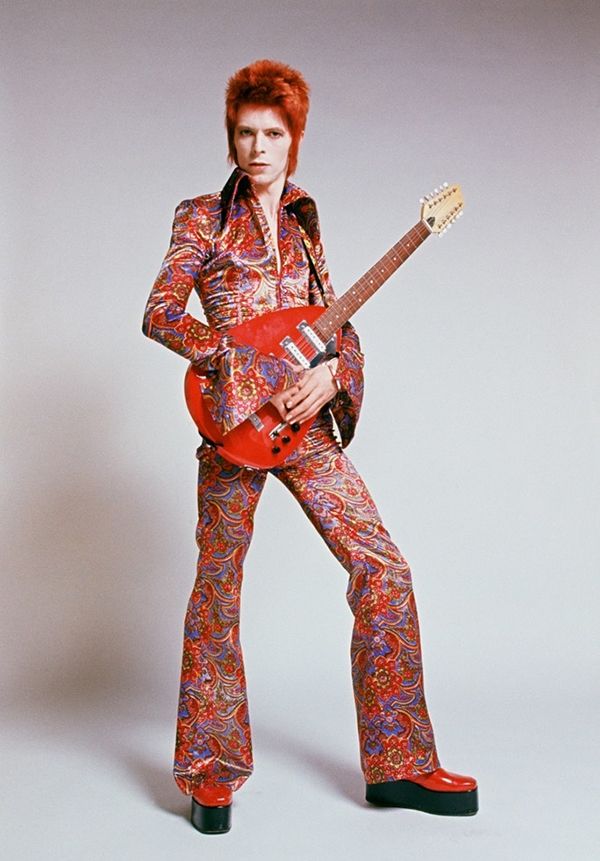 Ziggy is your quintessential androgynous Star Man: high gloss head to toe veneer, glam rock influences crossed with theatrical, kabuki pallor and dystopic poise. The look is best represented by the Freddie Burretti two-piece suits from the early seventies, using either colourful quilted materials or op art patterns. In 1972, the suits are utilitarian (think Clockwork Orange) and teamed with sensible lace-up boots camped up by the lickable, high-lacquer shine. To emulate this look, look at every Spiders from Mars performance, and adapt a lounge suit tailoring with a huge supply of glitter and/or winged shoulder pads. Another reference point is Burretti’s double-breasted suits from ’73-’74: the short, narrow jacket, high rise trousers, braces and tight vintage jumpers. 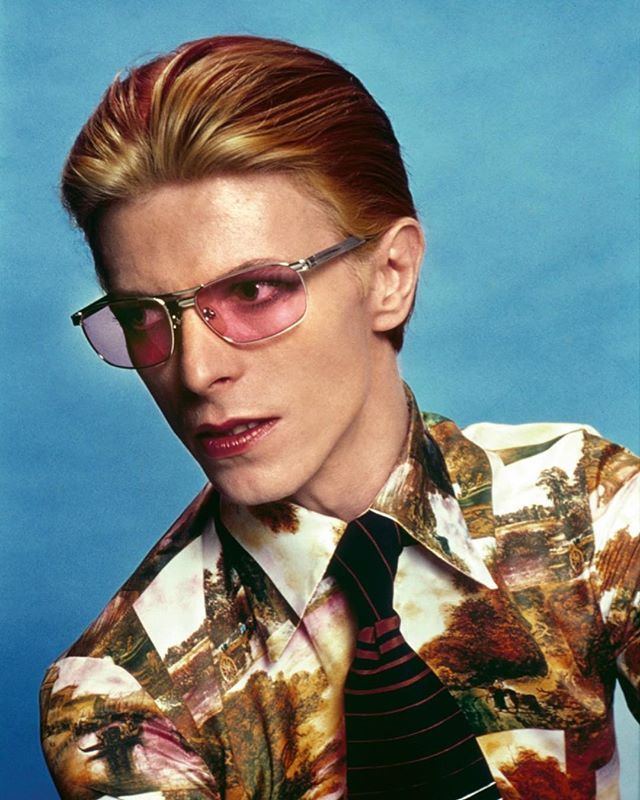 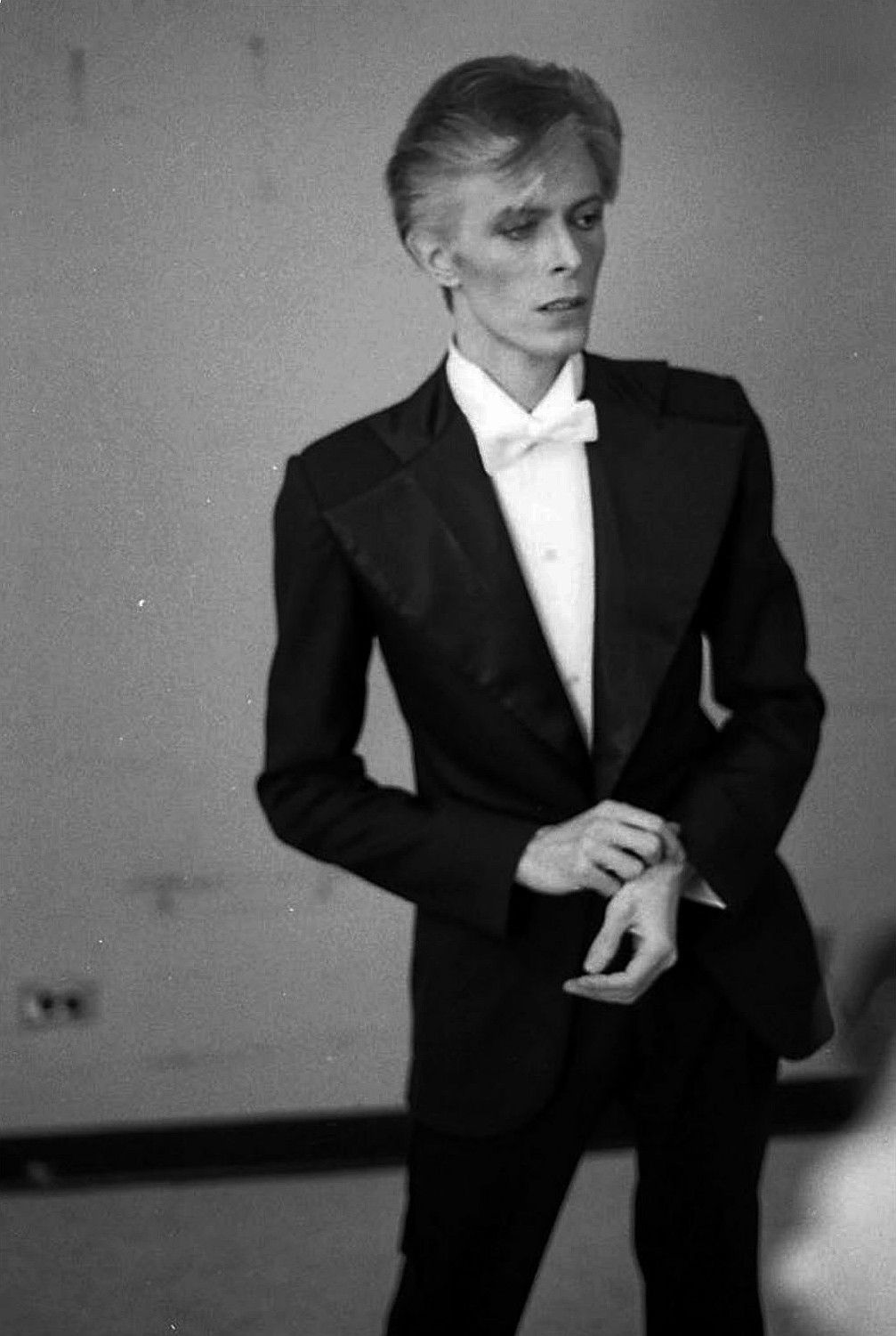 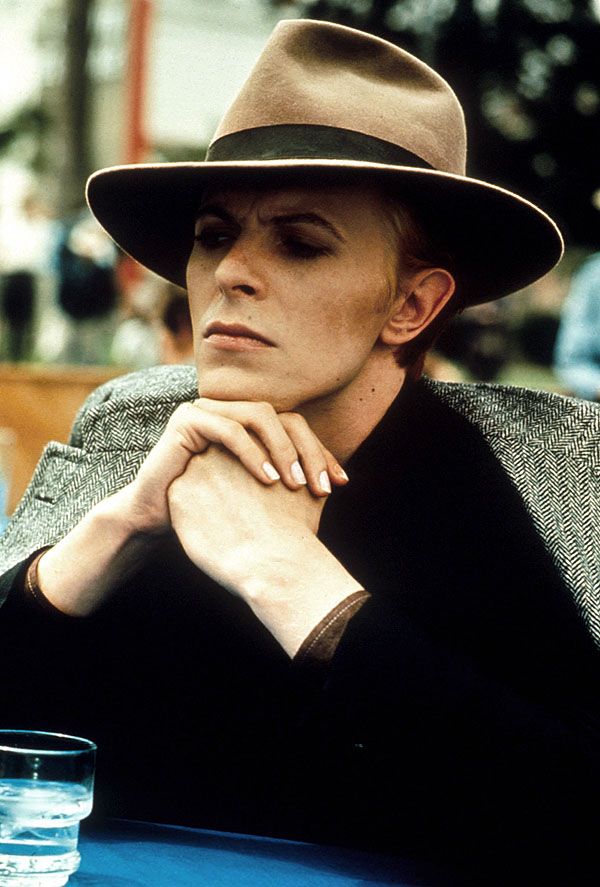 The Man Who Fell to Earth still 1

The look developed during filming of Nicholas Roeg’s epic, The Man Who Fell To Earth (1975). It owes its timeless style to Berlin cabaret of the Weimar era (the be-suited Marlene Dietrich), re-imagined for Bowie by designer Ola Hudson. In the film, Bowie plays an alien who appears frail and vulnerable but maintains his cool poised aura. The quintessential Thin White Duke outfit consists of a white shirt with French cuffs, immaculately tailored jacket with wide lapels, black vest and trousers. The hair, orange with front highlights, is severely slicked back, and topped with a trilby. Re-imagined, this dandy look has been sported by La Roux in the early stages of her career, Stefano Pilati for YSL menswear in 2008, and by Tilda Swinton pretty much everywhere.

A continuation of Bowie’s most admired looks. 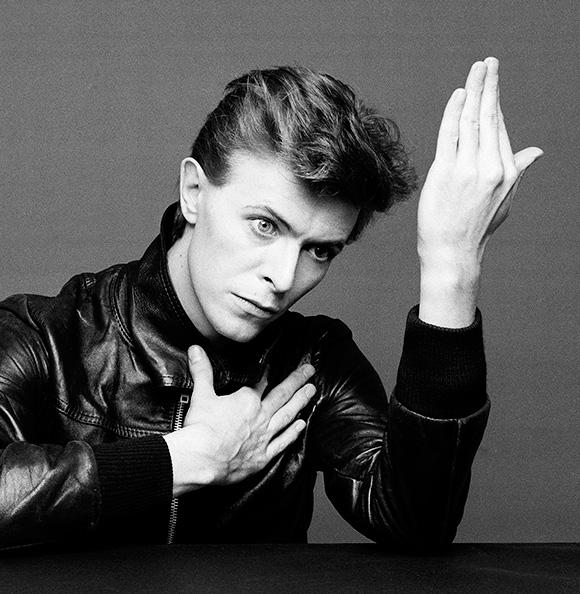 The visual bleakness of the late Cold War pop aesthetics, with its introspective post-industrial darkness, is a stripped down, sinister look which is also referenced in the film the Matrix. Bowie skillfully mixes the paranoid uniformity (in Heroes) with the insane cabaret of The Man Who Sold The World. No longer an untouchable avatar, this look epitomises a disturbed projection of a fallen hero, a disturbed artist finding his way in the dark. The key outfit for this look is either the tight shell of leather jacket and pleated trousers, or the nautical costume with a tiny, fitted t shirt and ballooning trousers designed by Natasha Korniloff for the Stage tour in 1978.

Records: Earthling, The Next Day 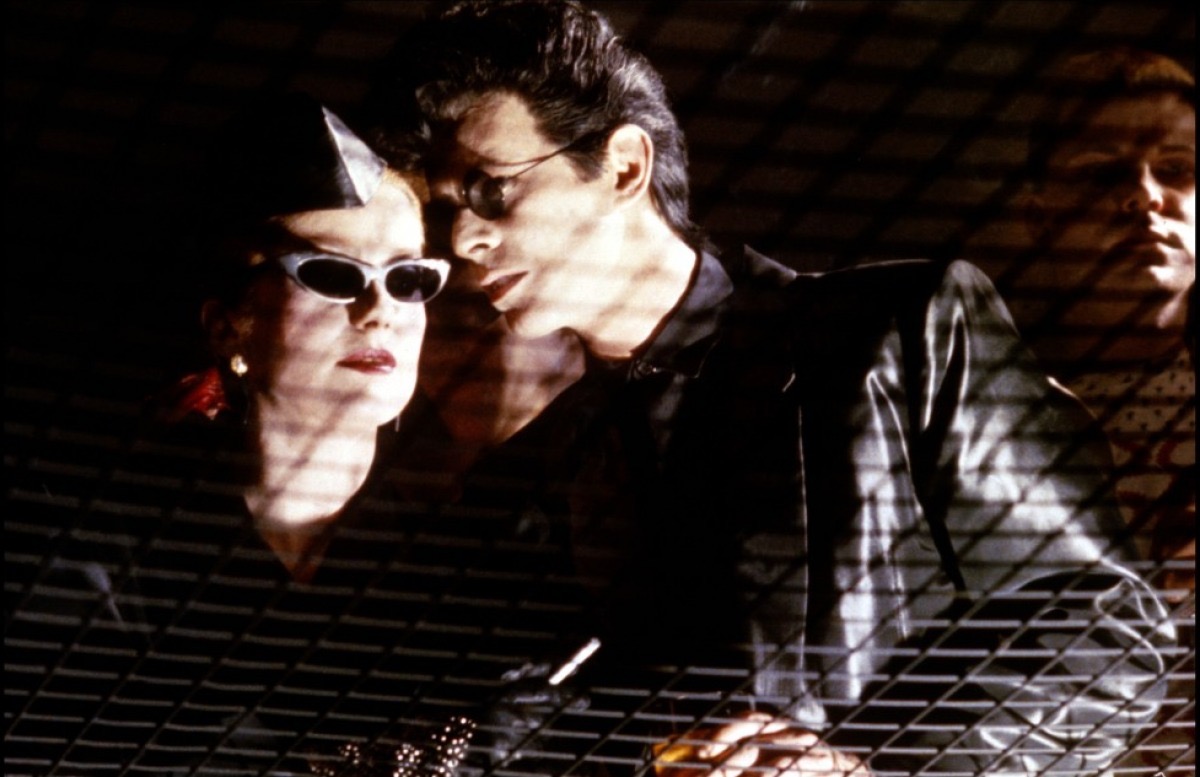 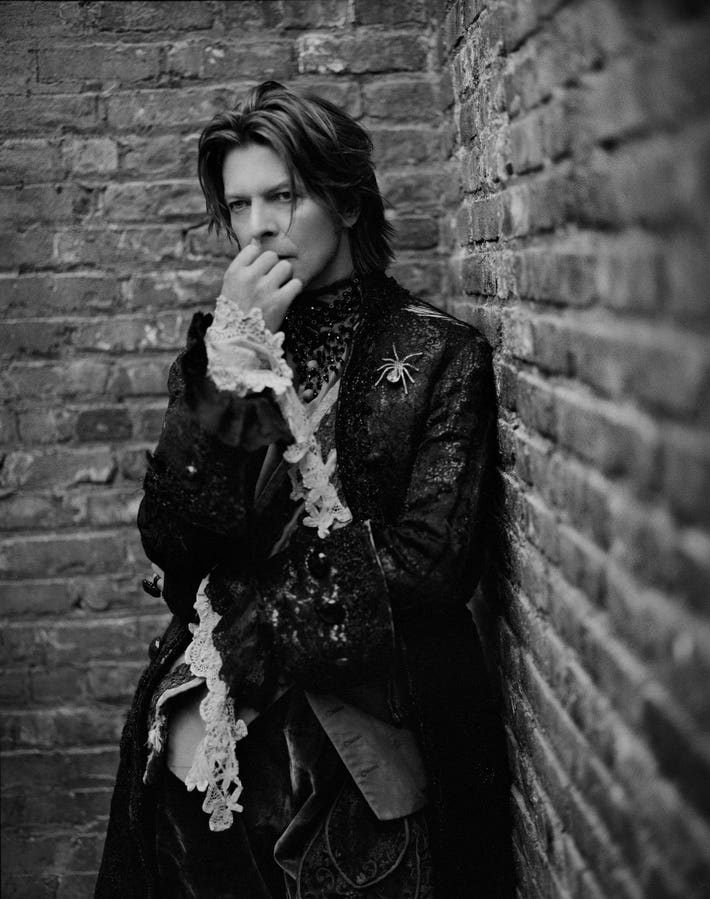 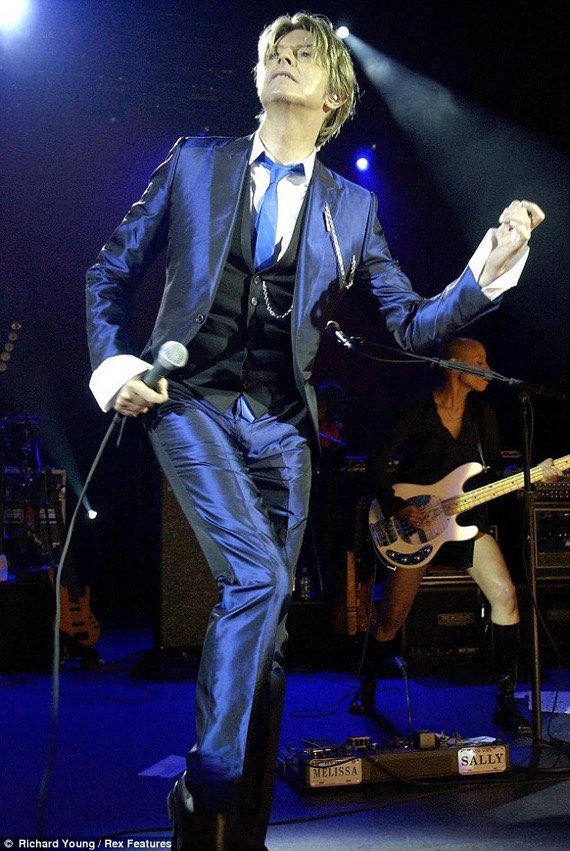 The Hunger, the British horror from 1983 directed by Tony Scott and starring Bowie, Catherine Deneuve and Susan Sarandon introduced a vampire aesthetic that differed from the previous period costume drama style. The costumes, designed by Milena Canonero, are far from baroque and tacky: Deneuve and Bowie are clothed in über-fashionable, minimalist armour, like the dark mandarins of Thierry Mugler’s visions (evoking perhaps the costume of Blade Runner’s replicant, Rachel, created a year before). This aesthetic is all about a slick, cold formality, reserved body language, allure of fetish and a slight flirtation with uniforms (in the opening club scene, Deneuve wears a cap that appears to be a stylised version of an Italian fascist WW2 overseer’s cap).

This style differs from Bowie’s personal look at the time (the Let’s Dance period), but later on the designers have made occasional vampiric references to the film, from a Byronesque Giorgio Armani suit for the Sound+Vision tour (1990), to Alexander McQueen‘s distressed costumes for the Earthling tour (1997) and Hedi Slimane’s razor-sharp suits for the Heathen tour (2002).

Arguably the design of Bowie’s latest album, The Next Day, holds a mirror to the invisible spectre of his timeless style. 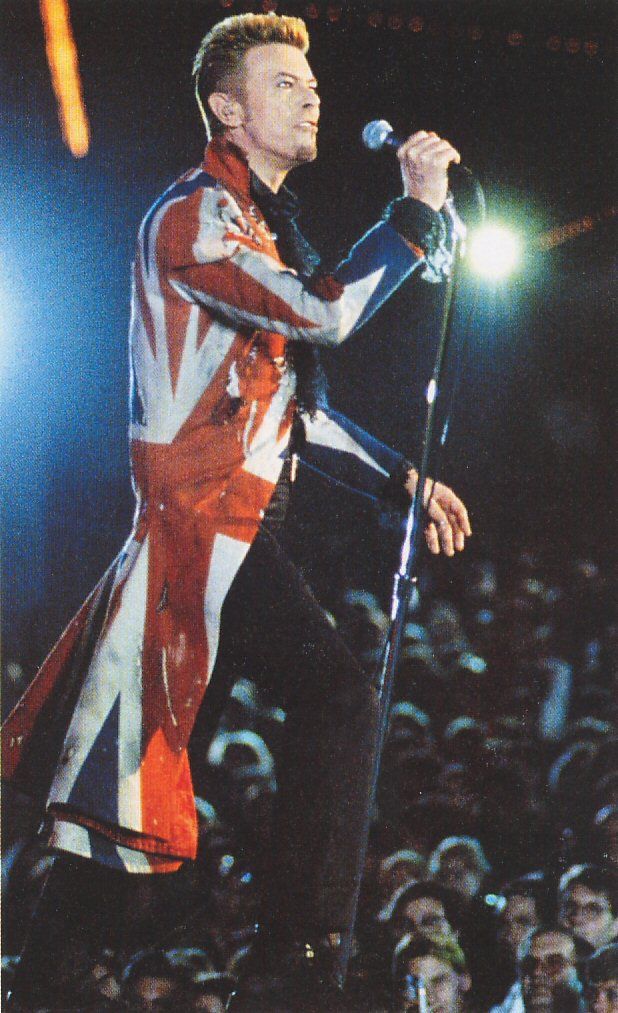 The Exhibitionist – the Fashion of David Bowie

Think David Bowie, and you’re thinking fashion. Yes, the cold and outrageous music comes first, but it would have been long resigned to geeky bedrooms if it wasn’t flying on the multi-coloured kite of his ever-changing theatricality. David Bowie arguably affected fashion of both genders more than most individuals, including fashion heavyweights, by the simple fact that he remained an outsider.

A natural instigator of the Zeitgeist and an immortal style icon, Bowie’s use of clothes was subversive, liberating, storytelling, shocking but always undeniably powerful. 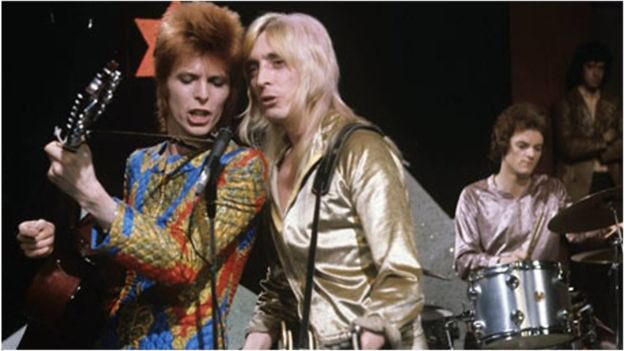 David Bowie performing Starman on Top of the Pops

So how can we learn from the master? Bowie was about the complete performance. Whatever look you choose, from the glam era shell suits encrusted in glitter, knee-high glossy boots and a flaming mullet (in Schwarzkopf cherry red), to the ghastly dandy in ice-blue suit of the Diamond Dogs period, the immaculate Thomas Jerome Newton (who Fell on Earth) or the fatal Man Who Sold The World who channeled Oscar Wilde for the twenty-first century, you have to keep the strong undiluted vision and a steady eyeliner hand. For the strongest impact, don’t settle. Never copy an outfit that you’ll wear with your “regular” hair, everyday shoes or a puffa jacket on top. Boys, shave your legs. Girls, get dangerous. Better yet, stay ambiguous, camp and mercurial.

Translate the sadness of the suburbs into the stellar power of dreams and theatricality. Perform. This season’s revival of fake fur coats is on your side: wear them on a skinny, shiny, plunging shirt and shorts; fling them over the fishnets, platforms and frilly shirts; or dress entirely in black like a mime, face painted white, hair an explosion of mad curls. Dig out some oversized trousers, like the 20-pleat ones that Bowie wore with a tight top and braces on his David Bowie Live tour. Adapt some palazzo pants from the last season. Again, whip your hair into a Tilda Swinton updo, and coast down the street with your Plastic Soul gaze. 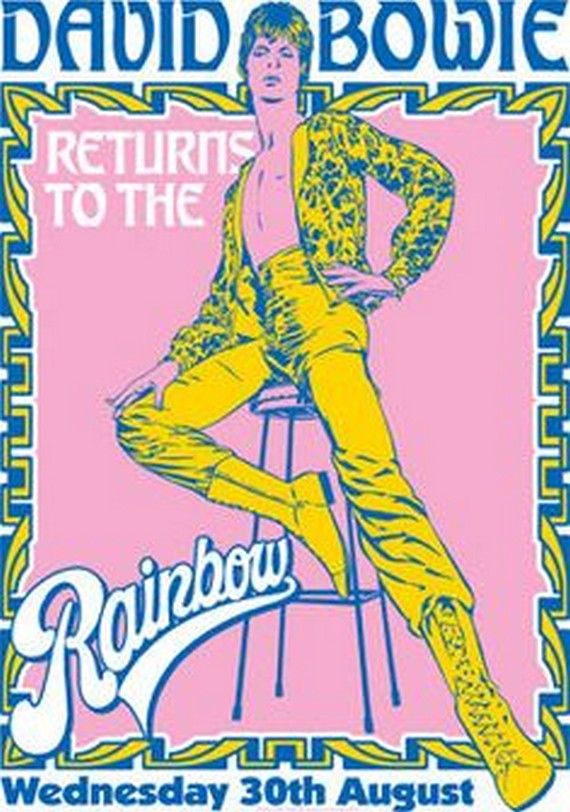 David Bowie returns to the rainbow, circa 1973 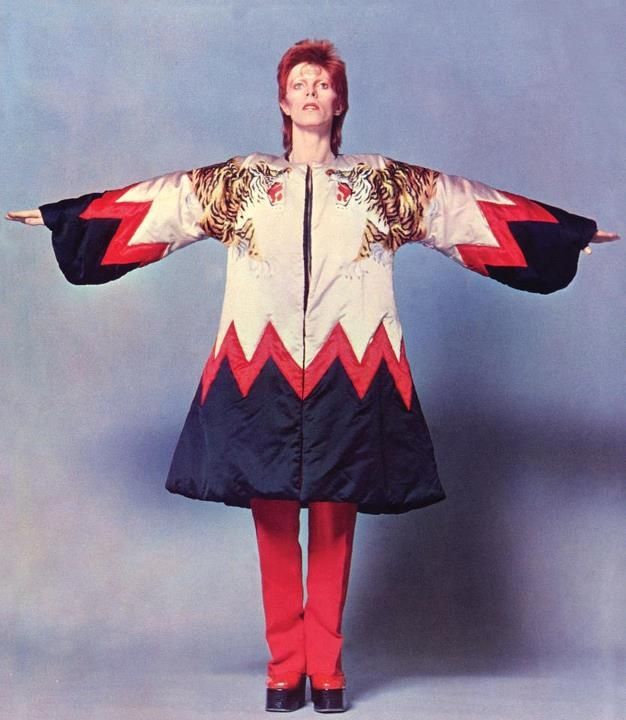 Exaggerate. If you’re planning on adapting one of his looks, be prepared to up the stakes from trendy to charismatic. Keep the cut, but enhance the materials and colours. Walk with a perpetual stage light directed your way. Shift from cool to farcical, from Edwardiana to fairy tales and back. 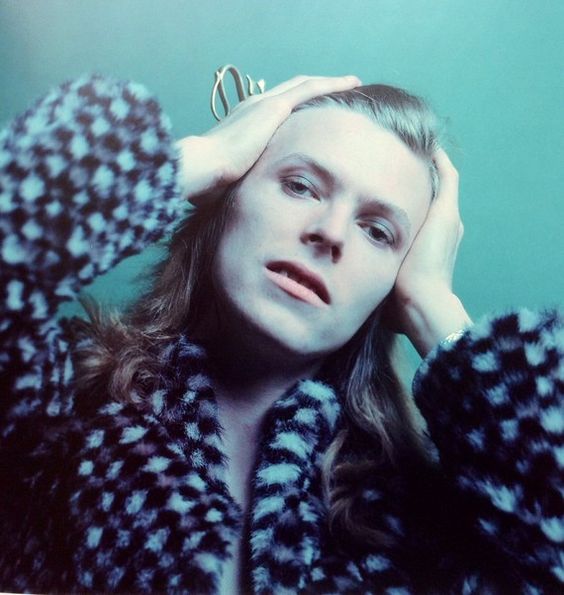 The best lesson one could learn from Bowie is to adopt his constant quest for new inspiration and ideas. Remain on the lookout for what is to come: visual art, music, film, theatre, internet, creative world at large. Each of these realms offers fuel for transformation. In the 1970s, designs by Kansai Yamamoto offered a perfect blend of exoticism, otherworldliness and futuristic desire: today one needs to scout the worlds of manga, sci-fi, ethnic costume, cult horror and dance for a reinvented silhouette of “space samurai”. Get the tone right, the spirit of your glamorous look: details can be largely DIY and open to interpretation.

The current long, swaying fringe trend lends itself well to the recreations of the Ziggy Stardust look, as do op art patterns and block colours. The coolness of the Diamond Dogs era requires sharp tailored double-breasted suits in frosty expressionist greys, blues and ochres, to be worn with metallic ties and boots and crisp shirts. Black trousers, waistcoat and a gleaming white dress shirt from the Station to Station tour demand vicious cheekbones, a sleek gleam of bright hair and vitriolic, glossy lips.

A proponent of individualism, Bowie is a constant influence on fashion designers. Check out Dries Van Noten’s tribute to the Bowie suit from 2011, Miu Miu’s hommage to Ziggy in a 2012 campaign starring Chloë Sevigny, Alexander McQueen’s gloriously dystopic S/S 1996 collection influenced by the film The Hunger (1983), or Hedi Slimane’s blade-sharp tailoring for Dior Homme in the early 2000s which came from his obsession with The Man Who Fell To Earth, and which he subsequently sent to David Bowie. The fashion made a full circle.

Finally, there is no one way to borrow from the intriguing, avant-garde style of David Bowie; the key thing to remember is to find your own personal point of metamorphosis, own incarnation of the theatricality, presence and cool flamboyance, and to wear it with aplomb. 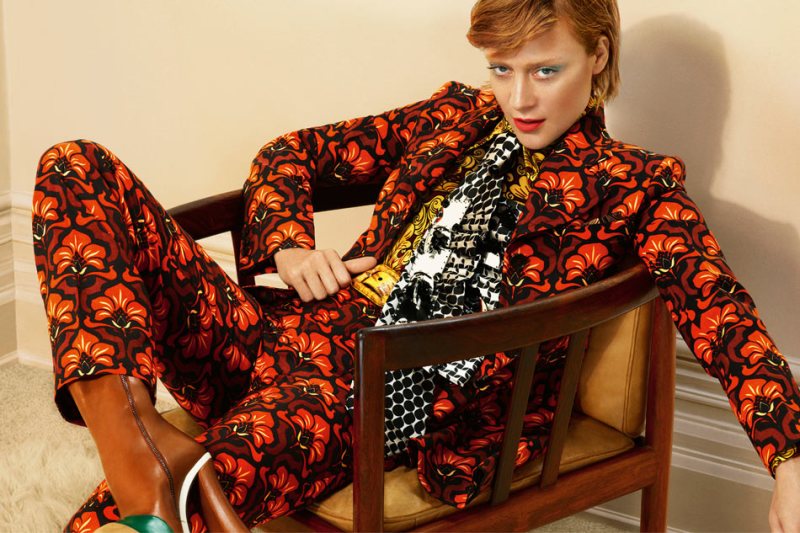