In fact, both Elsa Schiaparelli and Charles James worked closely with textile manufacturers to create new materials, and were paid by different zipper brands to add zips to their couture. 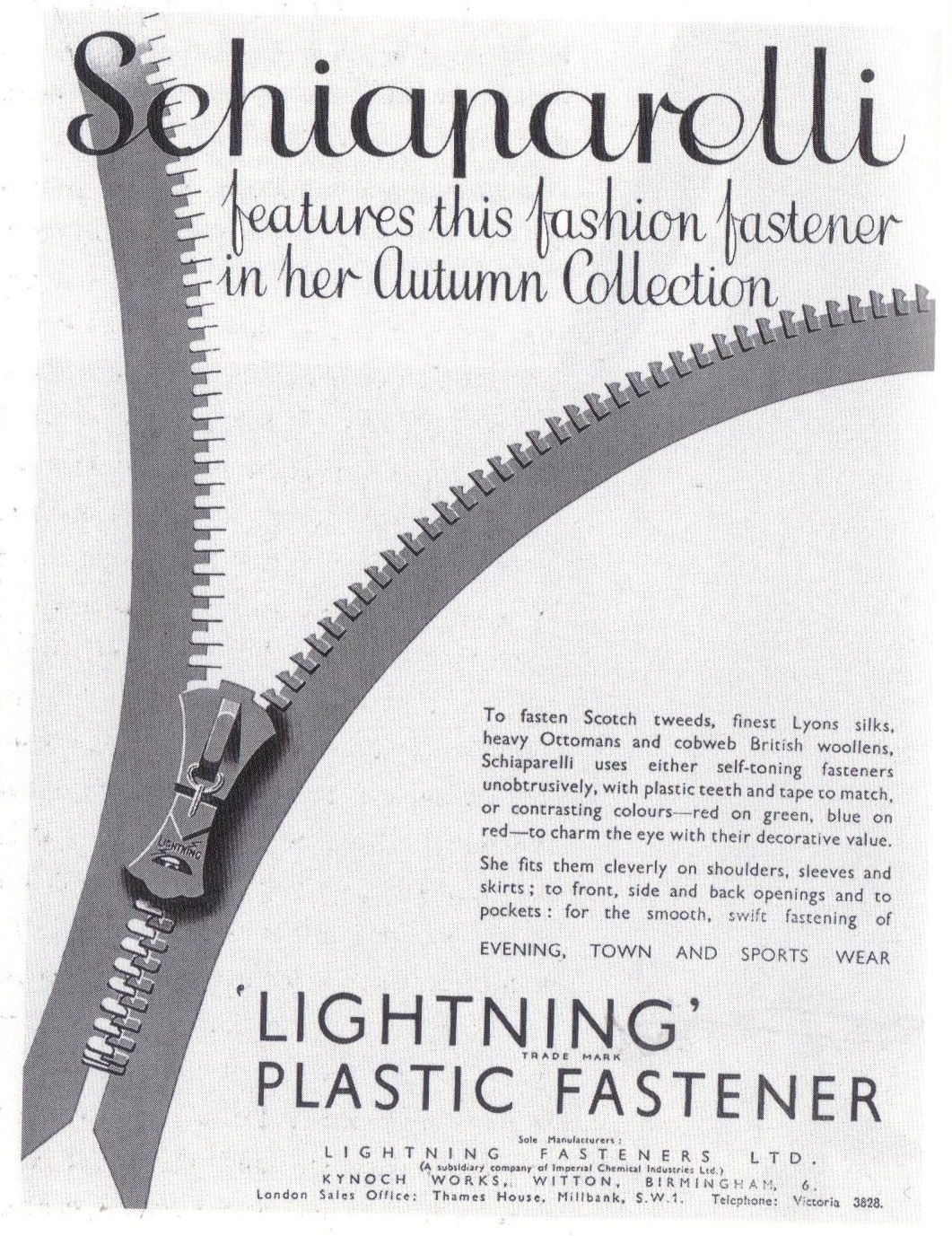 But we’re not talking carefully hidden, invisible zips. Both Schiaparelli and James’s zips were so prominent as to be punkish – they took their product placement very seriously, putting it centre stage!

But they were both experimental designers with a sense of fun – adding a huge plastic zipper to the front of an expensive couture garment, as Charles James did later in his career (1952) to this incredibly elegant evening gown was shocking in two ways – a vulgar zip on show, instead of rows of invisible tiny buttons?

And also, right on the front, diagonally from breast to hip – an obvious invitation to slide it open. In 1932 he created the “Taxi Dress” – so-called because it was easily slipped on or off, even in a taxi.

Later he made another version with a spiral zip. The “Taxi Dress” is a wrap dress, and Schiaparelli created one too – so much for Diane Von Fustenberg inventing them in the 1970s.

Charles James’ other contribution to womens 1930s vintage clothing was the Puffa Jacket. His satin evening jackets were a lot more elegant than today’s versions – which keep you warm, but tend to lack pizazz. This 1937 jacket is not made from natural silk satin, but a man-made satin.

Again, both James and Schiaparelli were enthusiastic investigators of new man-made textiles, swapping them freely for more luxurious traditional fabrics. Schiaparelli loved inventing new fabrics, such as fabric that looked like shaggy fur but was made of metal, and material from tree bark (a forerunner of the now often used viscose made from bamboo?).

In 1935 Schiaparelli, working with chemists, invented “Rhodophane” – a “glass fabric” as she called it, which was transparent. She was naturally incredibly pleased with it – transparent dresses have such great potential for shock value! But it was always brittle and hard to handle, needing to be interwoven with strips of metal or silk to keep from tearing.

Legend has it that it was also literally impossible to clean – Vogue editor Diana Vreeland had her Rhodophane gown returned to her in a bucket when she sent it to the drycleaners, as the plastic reverted to an oily sludge when it came into contact with dry cleaning chemicals.

The same problem occurred with sequins you may find on womens 1930s vintage clothing. For a long time sequins were made of shiny metal, and with the Twenties vogue for sequins showing no signs of stopping, the race was on to find something lighter and cheaper than the heavy little discs.

Experimentation in the 1930s produced coloured, shiny sequins made out of coated gelatine (yes, the stuff you make jelly to eat from). They were light, and shiny… but like jelly, melted in the heat. There were jokes at the time that it was impossible to be indiscreet in these dresses, as you could see exactly where a man’s hot little hands had been as they melted the sequins away!

Detail of a zip on a 1935 Schiaparelli gown.

Shop now
20% off your next purchase
Use CODE: VINTAGE for 20% Off Your Order
SHOP NOW