When you go shopping in a city, do you look up? Above the shops and the eye level sights. If you ever have, you’ll see how much architectural detail there is in the flats and offices above. You’ll see interesting window frames, mouldings in the brick work, different styles of windows and doors. Once you have noticed them, you’ll never shop with your eyes just on the shop fronts again. (I’m writing this in full lock down, so perhaps this is making me wistful for the big city and its varied wonders). But my point is, vintage buttons are the detail on vintage clothing that when you notice, you’ll never miss again.

Of course, some vintage buttons are just plain plastic things, coloured to blend in with the garment. But many are really interesting, even in just a humble way. They may be plastic, but shaped like a flower. They might be a plain brown colour but then you notice they are made from shell. Buttons also tell stories.

The buttons we know are clothing fasteners. But it is thought that they weren’t invented for this purpose. Originally, antique buttons were something more like a brooch. A decoration, which was securely sewn instead of pinned on. 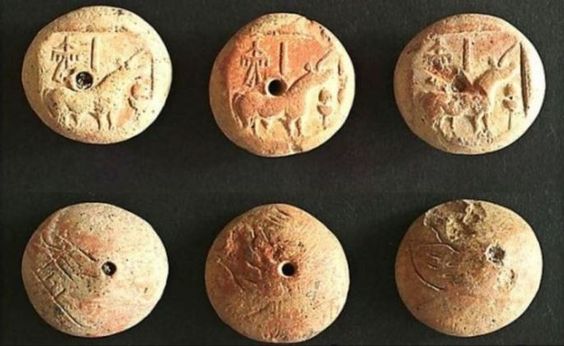 Buttons from the Indus Valley Civilisation. These aren’t the oldest ones that have been found, but they are still from the Bronze Age. The top ones were made in a mould, and the bottom row have decorative lines that are now worn away. They are made from terracotta. Image via Pinterest.

A 5000 year old button, made from a curved shell has been found in the Indus Valley in the Pakistan and India region. It was made by a Bronze Age person, of the people who have been named the Indus Valley Civilisation. They were very sophisticated, living in cities of between one and five million, and had not only houses and sewage systems but artisans carving beads, making ornaments, sculpting statues and painting plates. They also made buttons which were carved into geometric shapes and had drilled holes for sewing buttons to clothing.

I have said this before, but sequins were originally a kind of gold button for pharaohs. When tombs were uncovered in the 1920s, they discovered that the Egyptian king’s clothing were covered with overlapping gold discs, each sewn on. This twinkly bullion which caught the light so prettily inspired the trend for sequins in flapper fashion. 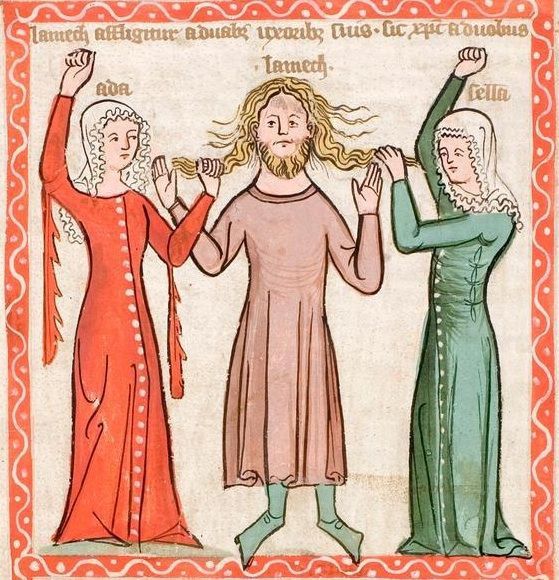 Bronze Age people didn’t wear particularly tailored clothes. So they didn’t need fastenings, preferring to just have head holes and wrap or tie the rest of the garment around them.

But when tight fitting clothing came along, closures were needed. In the 13th century, Medieval Germans at first used lacing, and then invented buttonholes to go along with their buttons. By the 14th century, lines of buttons and buttonholes were widespread on clothing in Europe.

Buttons with a Secret 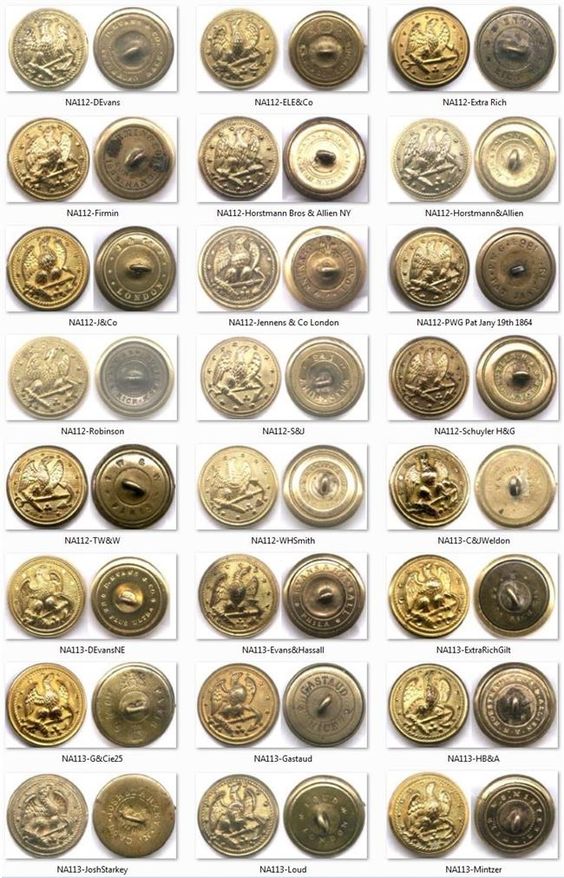 Here’s a story I like. So, some buttons are completely flat, with holes drilled in them for thread. When you sew these onto a garment, you carefully wrap the thread a few times around the underneath of the stitches to form a shank. But some buttons are much bigger, and they come with a shank already formed. Think of the metal Vintage Buttons on military uniforms. They are large, embossed, and hollow. They don’t need the drilled holes because they have a metal shank soldered on.

Several people have considered how these tiny hollow spaces can be hiding places. In the second world war, certain buttons were made to open up like a locket. They were fitted with compasses or filled with  ingeniously invented tools, Swiss army knife style. Hollow Vintage Buttons have also been made to smuggle things, like messages or, more ignominiously, drugs. 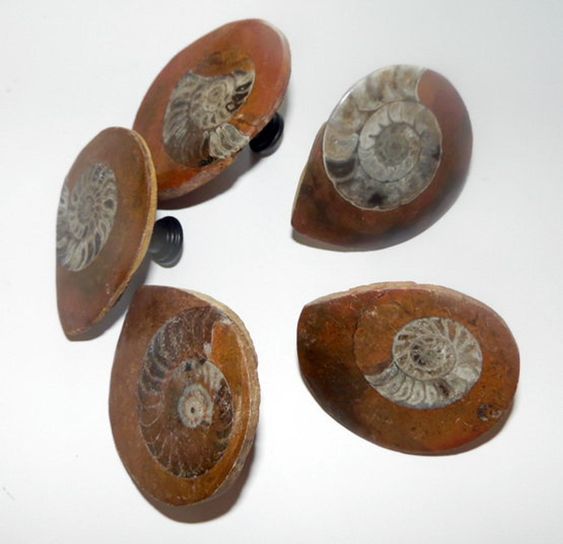 These buttons are made from polished fossils. Image via Pinterest.

Buttons have been made from almost every possible material. It just needs to be hard enough to hold its shape, and malleable enough at some stage to be formed into that shape. So Vintage Buttons actually hold the key to the timeline of materials technology.

The first Vintage Buttons, as we have seen, were made from clay, shell, or other materials like bone or horn. Later on, in the Industrial Age, they were also made from rubber, plastic, and other synthetics. They can also be made from already existing objects, like pebbles, seed pods, or tiny ornaments. Old china crockery has been repurposed into buttons too.

Knowing this, in 1918 the American Government commissioned a survey of the international button market. Vintage Buttons made of an astonishing array of materials were listed. Papier mâché was mostly used for shoe buttons, and vegetable ivory was most popular for suits and shirts. Other materials included wood, metal, glass, lead, enamel, bone, leather, rubber, buckhorn, silk, linen, crochet, porcelain, cardboard, stone, porcelain, mother of pearl and celluloid.

Now, it is very unusual to need a shoe button. Mother of pearl, plastic, wood or metal are the overwhelming choices for buttons. Most of them are made in China.

Vintage Buttons can hold a lot of memories. Though you may have barely registered them at the time, the buttons from the cardigan your nana always wore could bring remembrance for you later on. The buttons from a baby’s dress  could be nostalgic for a mother. While you might not want to keep a lot of old clothes from loved ones, sometimes just the buttons can suffice. Some people keep them in a beautiful button box, or sew them to a cushion. Buttons are special.