Shoulder pads have been around a long time, filling the mannish shoulders of tailored suits during the 1940s and making a brief appearance in the seventies.But it was 80s Shoulder pads that saw them burst out big and bold during the height of eighties fashion.

Shoulder pads and the eighties

80s Shoulder pads were nothing more than fabric covered padding, giving height and shape to tops, jackets and dresses, and helping to give the illusion of height and broader shoulders for the wearer.

They had a practical purpose and were a god send for those with sloping shoulders and narrow upper bodies.

They were popular in the 1940s, the 1980s and in the late 2000s, but when we think of shoulder pads, it’s always shoulder pads 80s style we remember and that awkward decade of suits and metallic sheen dresses. 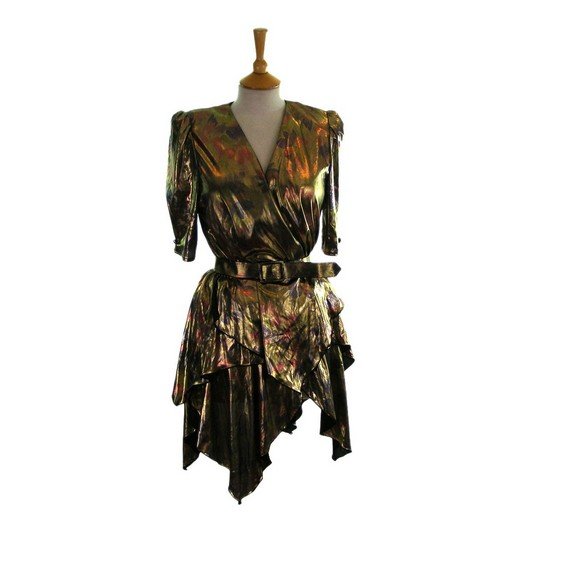 Today we’re looking exclusively at 80’s fashion and for those of you with a penchant for eighties shoulder pads this should be right up your street. We’re going to start with the 1940s and work our way towards those heady, shoulder padded days of the eighties.

Eighties fashion looked to the forties for inspiration, for it was here that shoulder pads were born, sitting on the shoulders of a suit that became more interesting towards the end of the decade.

Women had been doing men’s’ work during the forties, and with it came a new attitude that was naturally followed by a more masculine and assertive style.

Tailoring of a woman’s suit concealed those little pads of extra shoulder that were new and very different from the floaty shapeless dresses that had come decades before, during the twenties and thirties.

And let it be said that Joan Crawford loved big shoulders and certainly let everyone know how much in the dresses she wore, on set and off.

The seventies saw flowers and blouses, but with only the odd little shoulder pad making an appearance when it was least expected. Floaty and loose was the seventies message and it stayed that way for most of the decade.

It was the eighties that saw the expansion of the 80s shoulder pads to be the terrifying odyssey they became. And they did give such a powerful silhouette, which is just as well because the eighties was all about power, even Margaret Thatcher wore them in her suits. Maybe she didn’t wear them quite as large as Joan Collins, but they definitely helped her with that all important stature.

When we say power, we’re talking the eighties power suit with 80s shoulder pads, it was about confidence, capability and conveying to the world you were in charge, no small wonder they were a favourite of Margaret Thatcher.

The eighties brought us yuppies and their brick sized mobiles, Gordon Gekko and “greed is good” motto and 80s shoulder pads Everything bad that happened after the eighties is always blamed on this decade, where selfishness and self-promotion were seen as something to aspire to.

80s Shoulder pads reached their zenith during the mid-eighties when they became bigger and bolder than ever. Watching Dynasty with Joan Collins and you saw her fight it out equally with any man or woman. And shoulders pads this big could do that, perhaps it gave women the kudos to think they were every bit as good as the men, if not more.

However, once women had got over it and were certainly doing it every bit as good as any man, the mighty 80s shoulder pads eventually shrunk till it disappeared altogether.

While at their height 80s shoulder pads were in every dress, jacket, t shirt and blouse – the bigger the better, giving height and shape to every woman and creating the most dramatic silhouettes.

Today, you may fancy reliving the eighties with some 80s shoulder pads love, and Blue17 should be able to help you with that, because there’s bound to be something that fits the bill nicely in their 80s vintage collection.

You can easily wear 80s shoulder pads fashion  with other more contemporary pieces, perhaps an eighties shirt worn with skinny jeans, or an eighties dress with ballet flats, or perhaps you prefer a more full on eighties revival with a top to toe outfit.

In any case, 80s shoulder pads can still have their place in 2015, if you really want them to and you’ll certainly walk tall.

Did people really wear neon coloured clothing in the 80s

Imitating fashion in the 80s pictures just got easier!

How to Make and Rock your own DIY 80s Clothing

Did people really wear neon coloured clothing in the 80s

Imitating fashion in the 80s pictures just got easier!

How to Make and Rock your own DIY 80s Clothing