1950s skirts – Ideal to give you that chic retro look

Nothing is more flattering to a woman, than when she looks in the mirror and sees her perfect figure reflected back – and that’s the power that 1950s skirts bring to your wardrobe! And to put a final touch to the ensemble, a well-chosen accessory, like a paired sweater or matching top, will add just that extra zing to your look.

The 1950s women’s fashion was crowned by fashion icons like Elizabeth Taylor, Marilyn Monroe and Audrey Hepburn. And if there’s one single item that was universal amongst their wardrobes, it was their 1950s skirts!

Where it all began 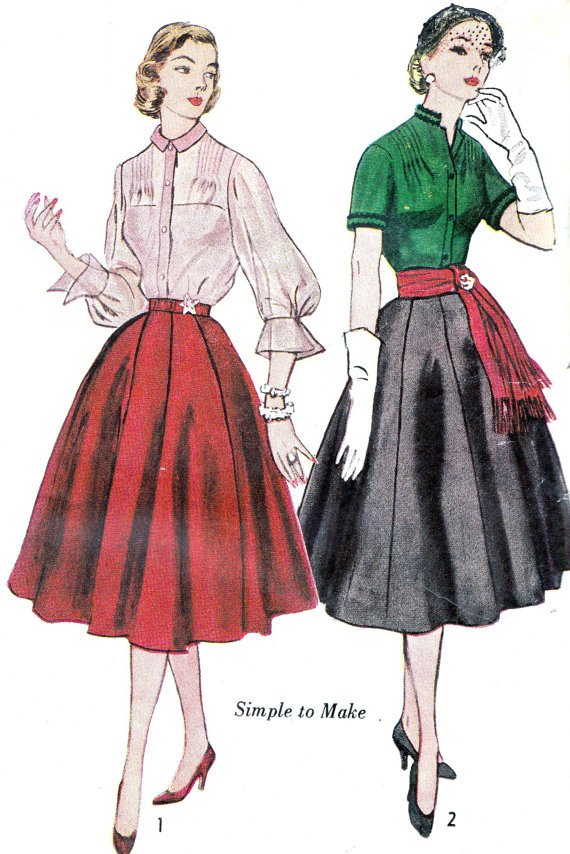 The dress skirt of the 1950s was greatly influenced by the events of the prior years. That’s when World War II and its ensuing turmoil were happening. 1940’s women’s fashion was highlighted by rationing, the black market, and limits placed on fine fabric and threads. The buzzword was: Simplicity.

Men, who had been fighting on the front-lines, came home en mass after the war. Now that they had jobs working in factories, farms and stores, they had more money to spend on their wives and families – including a clothing accessory or two!

But with the end of WWII also came a renewal of the 50’s women’s fashion sense. Newer types of fabrics were produced, and different patterns and designs evolved. Since material was no longer in short supply, the skirt size got a rethink. Designers took liberties with extra long lengths, adding frills, extra broad hip and waist linings, and hems.

It was this experimentation that gave birth to the 1950s skirts.

Women were at first enamored by the amazing array of designs, fabrics and styles displayed in local clothier’s windows. Catalogues in popular retailer magazines had entire sections dedicated to women’s fashion and accessories; and skirt dresses had a prominent place in them.

One of the most popular look associated with women in skirts back then was the Poodle skirt. Almost every woman of that era had to have one – it was an essential staple of her wardrobe. Because post-WWII “fabric famine” was no longer a barrier, these 1950s extra long, wide-swing skirts, which often flowed just above the ankle, were an instant hit.

What gave it its name was a little Poodle that was either transferred or appliquéd onto the fabric. Although the Poodle was not the only symbol used, because of its immense popularity as a household pet back then, it immortalized the 1950s skirts that bore its imprint. 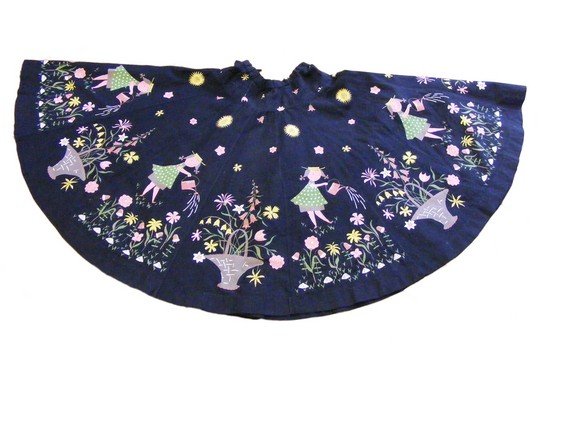 Mid-century femininity was also epitomized by yet another vintage 1950s classic – the Circle skirt. Brought to fame by Christian Dior’s famous “New Look” of 1947, Circle skirts come in a whole range of patterns, and were made from a variety of fabric. Their fullness in shin-length or midi style can make you look flirty and fresh at the same time.

While not everyone can boast of a Hepburn-like waist, cinching your Circle, around the midsection, with a belt made from the same fabric can make you alluring, yet give you a demure look – if “flirty” is not what you’re aiming for.

Skirt size matters too! For women with shorter frames, choosing something that’s slightly above or a tad below the knee will work well. Petite frames can easily become too overwhelming in a midi-length Circle, giving you a dowdy, overbearingly motherly look. But one thing you really need to be aware of with pleated Circles – they could make it look like you’ve added a pound or two around the midsection, even with your petite built.

Anyone that dresses vintage should take a closer look at the Pencil skirt too. First introduced in 1954 in Christian Dior’s “H-Line” of designs, the Pencil was a conscious effort by the House of Dior to steadily move away from their “New Look’s” full skirted and tight waist look, which dominated the women’s fashion scene from 1947 to 1950.

A signature of the “H-Line”, of which the Pencil was a key member, was Dior’s creation of a silhouette based on parallel lines. He did this by de-emphasised the focus from the waist – think “A-Line” – and emphasized it on the hips instead. That produced a distinct styling outline that curved over the hips and narrowed near the knees.

Pencils not only gave women a dramatically distinct look, but they ushered a new era in 1950s women’s style by encouraging women to adopt the “Marilyn Monroe wiggle”. That famous walk, from the legendary actresses’ role in “Uncle Lon”, was a perfect accessory in its own right to the Pencil, along with the dazzling hourglass figure.

The Pencil has since evolved over time, with hemlines ebbing and flowing depending on the style trends of the time. The introduction of Lycra in the 1970s, with its stretchy and clingy properties, allowed Pencil designers even more latitude, bringing some of the most memorable 1950s skirts into the modern era.

Remember, that 1950s skirts were worn in a very conservative era. Most of the skirts back then had hemlines that were either at or below the knee. So if you want to revive the nostalgia of that era, you need to dress for the occasion to really pull it off.

Whether it’s a period enactment event, or a fancy dress party, wearing a long flowing Poodle or a pleated skirt can really place you squarely in that era. Styling is important, so to compliment it you might consider an appropriate top. For instance, most women of that epoch would be seen wearing a blouse along with their Poodle skirt.

If red is your colour of choice, then a bright white or off-white blouse would go well with a Poodle made from any material. And depending on where the event is being held, indoors or out; and the weather, warm or chilly, you want to dawn a light cardigan on top of that blouse. 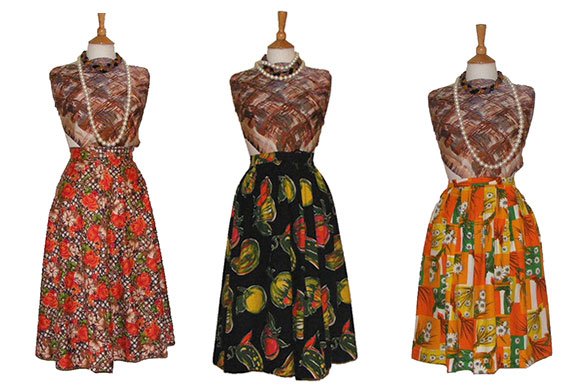 A Pencil, made from fabric with stretch qualities, should fit snugly at the hips, but shouldn’t be overly tight that is makes your figure look unflattering. To give it an authentic vintage 1950s look, a Pencil can be worn with a neutral coloured buttoned down shirt, tucked into the waist. If you want to take it up a notch, wear your Pencil with either a drawstring or shell top.

And if you are dressing for the weather, then a scoop necked shirt may be a good alternate to a sweater for warmer days. Aiming for that “preppy” look? Then an eternal 1950s staple, the Cashmere twin set, might make a better choice.

If the event is an outdoors one, you may want to take along another one of those 50’s skirt dress accessories – a silk or nylon scarf. Tucked loosely around your neck, under the scoop neck, the scarf will keep the wind at bay and make you feel comfortable on a chilly day.

Well, whether you opted for a pleated skirt or a Poodle, you really can’t fit into the 50’s without the appropriate footwear now, can you? You need to slip on an appropriate pair of shoes.

A Poodle, like the one Audrey Hepburn wore in Roman Holiday, stands out well with a pair of strappy gladiator sandals.  While the skirt itself adds a distinctive look to your body, choosing the sandals as your accessory footwear will give that sophisticated yet casual look to your ensemble.

Fuller women with taller frames can easily carry that 1950s skirts look with Circles and a range of footwear, including Pumps, Flats, Kitten heels, or even sandals. Women with shorter frames look better if the legs get a bit of artificial boost. Heels are a great way of elongating the legs and work well with Circles.

You’re just about done with that vintage 1950s look…but you need to top it off with that perfect hair style!

The essential characteristics of those long, graceful 1950s skirts, is that they not only highlighted a woman’s body, but also drew attention to her face – and that’s why your hair style matters. It’s hard to imitate that Pixie cut that Hepburn so gracefully carried, but as long as you clear away your hair from your face, showing more of YOU, you should be able to pull it off!

Like the skirt size, hair size matters too! Women with long hair can easily do a ponytail and throw their hair to the back, leaving more of their face exposed. A headband will serve well to push medium-length hair back.

An icon more than a style!

From housewives to women at the office, from women working in factories to teenage girls, the 1950s skirts completely changed how women looked at fashion. No longer was “simple” and “minimalist” good enough for them. Instead of the dress skirt becoming a style, it became an endearing fashion icon.

And as they say in the fashion world – Imitation is the sincerest form of flattery!

Even today, modern day fashion designers are imitating the past by experimenting with newer fabric and technology-inspired designs.  Their renditions of 1950s skirts are indeed testament to the fact that 50’s styles are still relevant. Even when paired with a modern day accessory, like a pair of Swede platform sandals, a pair of oversized sunglasses, an embossed snake clutch, or a set of and crystal disc earrings, vintage 1950s skirts will never fade away!

Whether it’s the Poodle, the Pencil or the Circle, 1950s skirts bring grace to any wardrobe and can add timeless charm to your personality