Try vintage capes to give you that authentic WW II look!

Vintage capes have no end to the celebrity attached to them. Who wouldn’t remember Sir Arthur Conan Doyle’s caped detective Sherlock Holmes of the 1880’s fame. The tweed overcoat, made famous by Holmes, has since inspired various other legendary characters.

From wool to woven fabric, to more modern materials like polyester and nylon, the sleeveless garment has since adorned the personas of fictional characters like Superman, who singlehandedly saved the world throughout the early 1930’s and then of Batman and side-kick Robin, the prolific crime fighters of the early 1940’s.

And although vintage capes are primarily reminiscent of those fictional heroes of yore, the 1970s saw them embraced by real-life celebrities who lived larger than life. Who can forget the famous King of Capes, Elvis Presley? And when it comes to Hollywood glamour girls, the wool cape has never looked better than when worn by icons like Sarah Jessica Parker or Olivia Palermo.

And before we forget them completely, the cape coat worn by Harry Potter character Severus Snape, and the dark side of Darth Vader, of Star Wars fame, isn’t complete with a more futuristic version of the humble sleeveless garment!

The vintage cape isn’t just a figure of speech. It truly has been around for a long, long time. In years gone by, ancient monks belonging to secret hermit societies weaved their own version of this timeless garment. Though nothing compared to what Hollywood icons might favour, the vintage wool cape of the medieval era was a rather coarse and crudely made garment.

During the Roman era, the humble monk’s garment was exalted to new heights, when high-ranking Roman commanders and senators wore them as a sign of status and social standing. Capes were also used as an accessory by women to shield their expensive furs from the vagaries of harsh weather.

The Victorian era saw the vintage cape evolve and put to use by men too. Men wore the Ulster coat, a combination of the overcoat with an accompanying cape, to formal and semi formal occasions. They were a great way to keep warm and stay dry as well.

Even today, the cape jacket and cloak are an integral part of many that work and travel outdoors. Sleekly designed for mobility, comfort and functionality, they are a standard fixture of military personnel, police forces and emergency workers that spend time in rain and snow.

A selection from Blue17

Although they may sound relatively “uncomplicated”, the humble vintage capes have evolved in styles and shapes over the generations.

Each of these vintage capes has evolved over the years, and each shape and style has its own characteristics, and traits. They can be linked to specific periods of bygone era, and were likely more utilitarian in their time than the “fashion statements” they are today.

Pulling Off the Caped Look 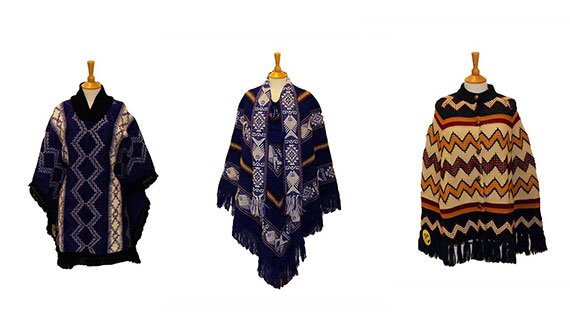 Who would think that this simple garment needed a style “pull off”, in order to make it work? Well, it just so happens that it does!

Whether it is the cape coat or jacket that you are looking to wear, there are several aspects that need consideration, such as:

Not all capes flare out from their neck fasteners, and that’s one important reason for giving the style a close look if you want to pull off that “caped look”. A petite woman, for instance, may do well to stay away from overly voluminous styles. Slim-bodied lovers of this garment, both male and female, might want to consider a style that includes a waist tie – something that brings the cloak into their bodies.

A woman with a curvy figure may want to consider a vintage cape of around mid-thigh length. Choose fabrics that are lightweight, because they will wrap around your curves and more fully flatter your figure. A garment made of thick materials, such as woollen jackets or cloaks, will add mass to your body, and may appear unflattering.

If you do choose a wool cape of lengthier style, you should consider using a belt or a matching tie to gather the bulk into your body. This will produce a fitted silhouette that could accentuate your figure.

Men and women of taller stature are ideally built to carry the cloaked look with lengthier and bulkier capes. Their height means that the long garment produces a more flowing and sweeping look. However, to really make that look stand out, you should choose a garment with a pleated style.

If you’ve seen the fashion news and you’re a regular follower of this blog, you’ll be aware that capes are back in fashion this autumn and winter, so we’re going to take a look at womens vintage capes.

This autumn the traditional winter jacket has been discarded for a little generous enveloping of the arms and shoulders.

Don’t worry, you won’t be forced out of the house in your aunt’s tweed number with little holes for your hands – unless you want to. Having said that they may not look necessarily look out of place in this autumn’s wardrobe.

Womens vintage capes – past and future 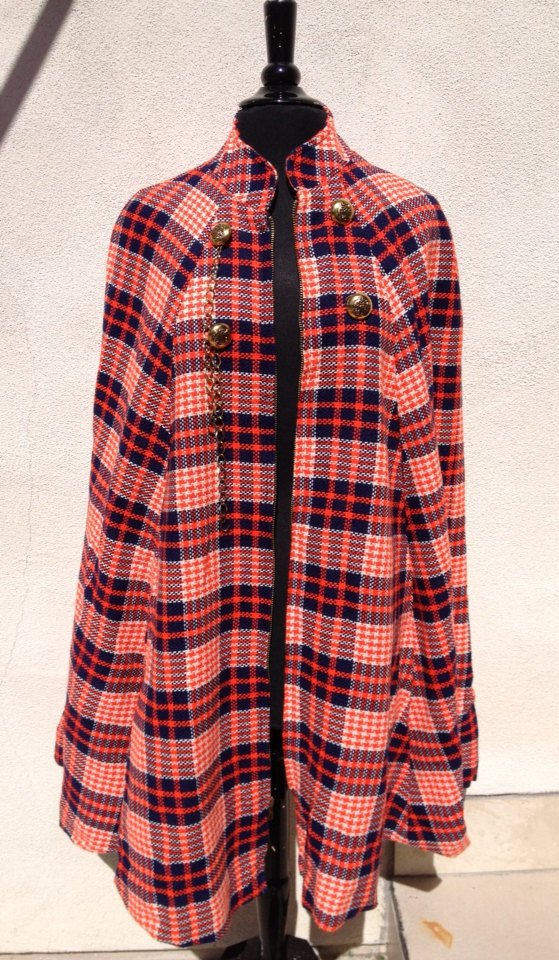 
We have touched on capes before and it wouldn’t be fair to talk about capes at all if we didn’t at least touch on the fashion history of the humble cape, especially seen as this is about women’s vintage capes.

You’ll be wanting to source your own capes and why not vintage? For you can easily fit them into this autumn’s key looks and perhaps add a few embellishments of your own.

If you’re good with a needle it’s easy and you don’t need to be a seasoned seamstress.

Capes have come in many different fabrics over the years including lighter fabrics for evening and summer wear such as silk, pleated chiffon, taffeta and crepe, with velvet, wool and cloth for the winter months.

Trimmings were varied from applique, braid, fur, ribbons and beading. In the 20s art nouveau and deco had a heavy influence on clothing, and capes came with cut outs and embellishments to coincide with the dictates of these two powerful art influences.

In the 19th century capes had gradually got shorter and shorter , with high collars and as time wore on, were seen less and less on the young unless they were going out and more often on mature women.

As the 20th century arrived, capes came with shawl type collars which were then replaced with the cocoon coat for ultimate enveloping of flesh during the freezing cold winter months.

Fast forward to the 1950s with heavy fabrics that helped to accentuate the lines of the cape, think mohair and yes, tweed (that again).In the 60s they were stiff with geometric shapes in sharp bold colours.

The 90s of course saw off the cape for the pashmina and in 2009 the cape returned shortly for a short blast but disappeared as soon as it had appeared.

Return of the cape

If you’re thinking oh not this again- then look away. The cape is returning this autumn and it’s going to throw the jacket and the coat to the bottom of the wardrobe.

Question is – are you up for it?

If you are then get shopping, go source some women’s vintage capes and see if you can find something that fits in with this year’s cape vibe.What are the key trends for this autumn’s capes?

We’re looking at matching short capes with a military style, or wearing them short for the evening made from fur and patterned.

You can also style them up with opera style gloves and knee high boots for a glamorous evening look.But really if you fancy a cape then do it your way, you can choose a vintage shape and perhaps wear a colour or pattern that fits in with the autumn vibe.

Be a caped crusader this autumn with some women’s vintage capes and create your own dramatic silhouette.

Up until recently I had thrown the cape into my memory bank filed under “unthinkable,” and refused to even imagine it from that time forward. Capes for me, and come to think of it, ponchos, held nightmares from which there was no return. Tweed capes worn for special occasions, mulch-coloured crotchet ponchos worn at parties – chosen by my mother.

The Cape is back and here to stay

Little did I know that the cape would become a fashion staple once again.

For those of you who thought that capes were only for superheroes and fairy tales then you’ve probably had a rude awakening by now with the sudden trend for capes that started last year, and from what we’ve seen from the catwalk for autumn and winter of this year, it doesn’t seem to be disappearing from view anytime soon.

You may be one of those people that will never venture outside in a cape, and that’s fine, it’s perfectly understandable, they’re not for everyone. However, the cape can give you a dramatic silhouette and they can offer a dynamic and refreshing change from wearing a jacket or coat.

If like me, you’re suddenly having your mind swayed by the cape’s charms, then you’re not alone, and unlike 30 years ago, the cape has reinvented itself and proved itself worthy of further wear.

The cape, not to be mistaken for a cloak, which is much longer, the cape is a sleeveless garment that usually closes at the neck to fall down the back and offers a fashionable look to match with separates or simply worn over a dress.

It really is more of a fashion piece rather than being functional, although they have been worn by the police and the military in the past, made from waterproof material.

Although they are often associated with a superhero, it can never give you the ability to save an entire nation simply by twirling around in a phone box, but what it can do is make you look extremely stylish.

Capes for this year come in a variety of materials, colours lengths and patterns and you can wear it anyway you want for 2015.

We’ve seen muted colours and ethnic inspired with stripes and fringes, capes in wool and cashmere. You can wear them with a collar or without, a polo neck or collarless and embellished with fur (faux hopefully).

A cape can envelope you like a blanket, or it can sit rigidly in its perfect triangular perfection, it can be minimalist or it can be adorned with embroidered patterns and fringes.

There were some dramatic capes on display on the catwalks of London with Gareth Pugh’s geometric and minimalist style, but there were plenty of other looks to choose from, with embroidered shorter versions and longer ones with opulent fur trims.

Some came with ethnic stripes and fringes with muted greys and pinks, while others combined ombre purples and blacks. Some even came with one or two pictures.

Vintage Capes for a classic, timeless and on trend look

Not everybody in the 1970s onwards wore tweed capes and nothing else, although they can still cut quite a dynamic silhouette if you do want to go down that route.

A cape can be an Edwardian affair in jet and wool, or it can be a caramel cashmere dream with fitted collar. There’s plenty of scope and the 60s and 70s created some dreamy ethnic inspired capes with plenty of collar and shape.

There are full length capes from the 20s that would look every bit as timeless on today’s catwalk and hooded capes from the 70s which are a real find and can be worn with just about anything.