Bark Cloth – Fabric of the World

Bark cloth, or tapa in Papua New Guinea, kapa in Hawaii, masi in Fiji, and many other names, has been in existence for thousands of years. The oldest piece found has been dated to 5900BCE. It was traditionally used in Asia, Africa and the Pacific as a fabric for clothing, material for painting on, and all the uses we have for woven material in the western world. Like woven material, bark cloth can be stiff, supple, soft, waterproof, fine or thick, depending what tree it comes from and how it has been treated. It’s not paper, though it’s sometimes described as that.

Its everyday use has died out, but the tradition of creating and painting it is consciously kept alive in many communities. The tree most often used is a relative of the mulberry tree. The term bark cloth is a slight misnomer, as it implies the rough outer bark of the tree. Tapa is made from the layer underneath the bark, the smooth outermost ring of wood. It is then soaked in water if necessary, beaten flat using various processes, and decorated. 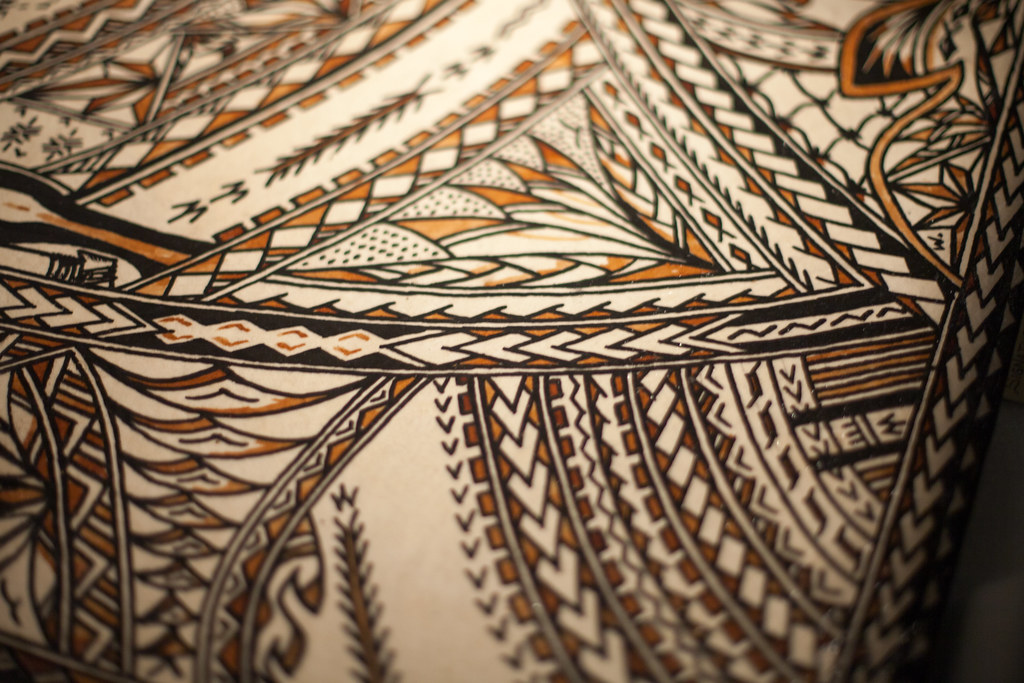 Europeans first encountered tapa when Captain Cook made his now-controversial voyage to what is now Tahiti in the South Sea Islands, in 1769. This incredibly expensive voyage, commissioned by the government, was ostensibly made to measure the journey of Venus across the skies, which could then be used to measure how for the Earth is from the sun. This would be invaluable in calculating distances during sea journeys. When they had completed this part of their task, Cook opened the sealed second set of orders from the government. This commanded him to find and investigate the country which was theorised to exist on the other side of the world. Nobody had ever seen it, but if it existed, it would probably hold great wealth and usefulness to England. This eventually lead to the colonisation of Australia.

However, at this point, relationships were cordial and both parties were curious about the other.

Their first welcome ceremony consisted of many villagers coming onboard the Endeavour and “Taking off a good part of their clothes and putting them upon us”, according to the naturalist onboard ship, Joseph Banks. A few days Banks and Captain Cook were each presented with a piece of bark cloth 11 yards long and two yards wide, which was perfumed. In return, Banks gave some of his own clothing that he was wearing, a lace edged silk neck-cloth and linen handkerchief. It seems that the local was pleased with the exchange and he put them on right away. Later on, someone in  a place quite far from the ship, where the sailors were staying overnight, stole all of Bank’s clothing, along with Captain Cook’s stockings and two jackets from other sailors.

Joseph Banks had spent £10,000 of his own money – the equivalent of £1.7 million today – on staff and equipment to record what they found. There was a portrait and landscape artist, a botanical artist, a scientist and several assistants. And so the clothes that locals wore were carefully recorded.

Banks saw three kinds of bark cloth. One was tougher and more oily. It was prized because it was waterproof, and came from the wild fig tree. It was worn by the more senior people in the village. There was also a kind that was quite coarse, made from the breadfruit tree. This was mostly worn by “People of inferior degree”. The finest was from the paper mulberry, “aouta” in the local language. This came in many different types, from fine to coarse. When it was dirty, each piece was washed in river, after which it may have lost its structural integrity because then many pieces would be beaten together to form a felted, very soft and supple cloth.

Local people wore these as loin cloths and chest pieces. The richer the person, the more cloth they wound around themselves. “The superior people spend much of their time in repairing, dying &c the cloth, which seems to be a genteel amusement for the ladies here as it is in Europe.” After they had dyed the cloth using brilliant red dye, the women were careful not to wash it off their hands but liked to keep it on their fingers and nails. In fact, sometimes they just dyed their hands on purpose. The red dye wasn’t fixed in the fabric very well, and required re-dying frequently. They also painted the cloth. 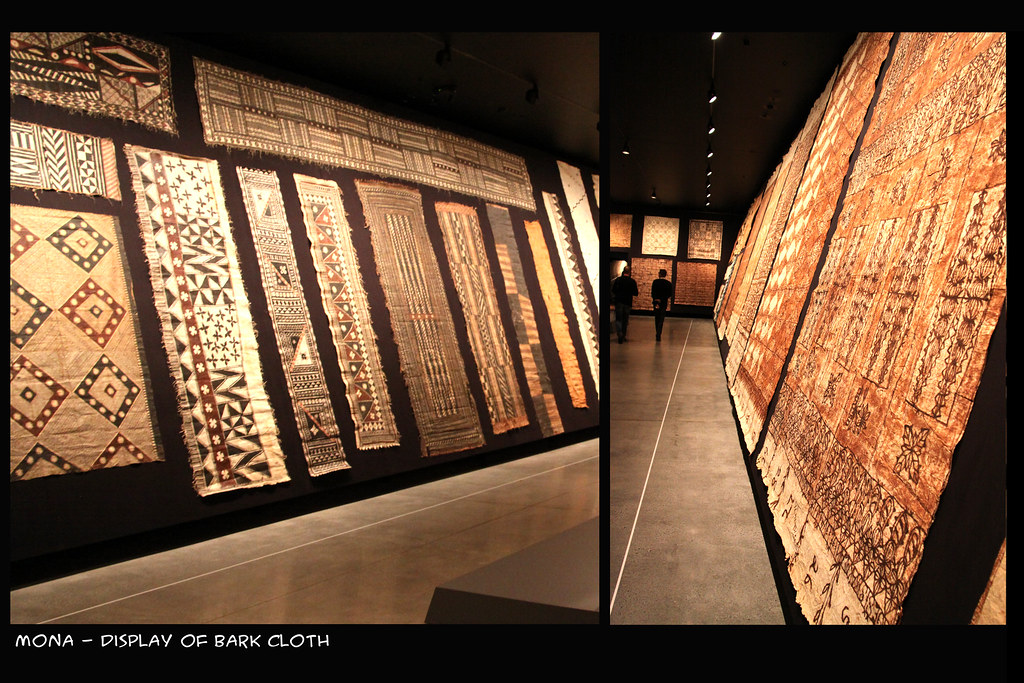 The expedition brought back many examples of bark cloth, and for many years it was bought by travellers and collected in Europe as a curiosity and artwork. It is still made for tourists in some countries, despite no longer being used as a principle fabric for clothing.

Traditionally, women do the work, although nowadays some men join in from economic necessity.  Here are several stages. The cloth often comes from a specially grown tree. When it is big enough, the whole sapling is cut down. The biggest ring is peeled away. The core is used for furniture. Other types of cloth come from bigger trees in the forest. When the layers needed are cut from the living tree, healing leaves are applied as a bandage. The tree will recover and can be used again.

The piece of wood is then beaten with textured wooden beaters, and kept damp as this is done. It stretches it. Then it is hung out to dry for a couple of days, and the holes where branches were growing patched. The bark cloth is stored flat under sleeping mats until it is ready to be painted.

In the Maisin tribe in Papua New Guinea, there used to be certain rules to painting the cloth. The women could not have sex before painting it. Nor could a husband come close while she was doing it. She chewed betel to get into a calm, meditative state.

The designs have changed over time. The originals were quite sparse and used as borders. But in the 90s, a gallerist visited the region. Since Aboriginal art, with its dots and swirls, was then in fashion, he encouraged the Papua New Guinea artists to make their work more similar in style to that. The art was successfully exported and re-popularised.