Okay, so it never happened. Gorgeous unibrow legend, Mexican artist Frida Kahlo never actually met the Bolshevik poet Vladimir Vladimirovich Mayakovsky. They were never a couple. Never dated. They never even posed for this photograph. So why is the thought of them so seductive? What makes this image so powerful?

It’s the Revolution, children. Even fashion needs something to believe in and Revolution, much like fashion, likes to eat its own children. This is why it comes renewed season after season, and why the youth of every generation strive to emulate the powerful disobedience of their elders through actions, but more frequently through clothes. 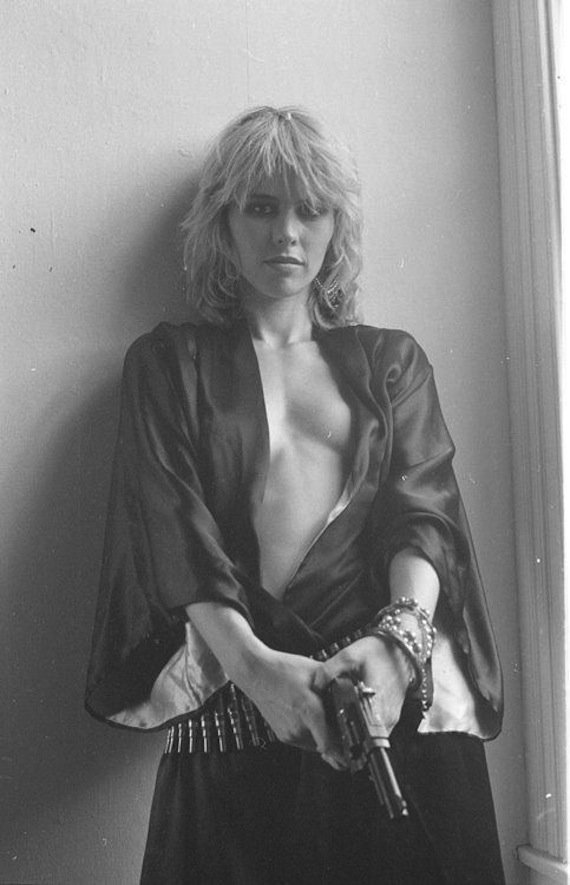 Model with a gun. Created in 1983 by Robert Toren aka Angrylambie. 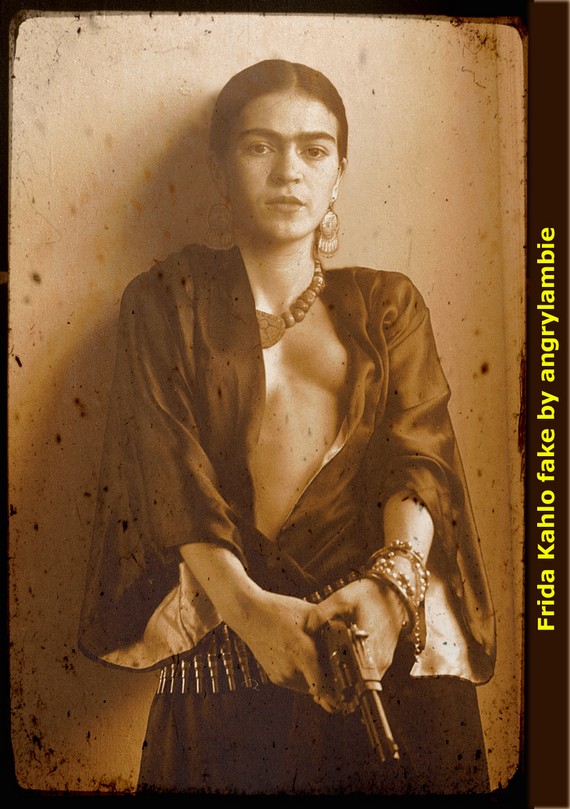 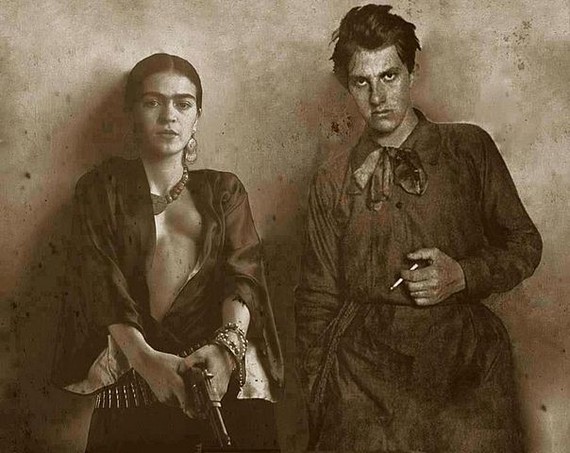 This intriguing composite of Frieda and Vladimir was made in 1983 by Robert Toren by using two existing photographs of Kahlo and Mayakovsky and an image of a lovely gun-slinging blonde, Donnette Thayer. So in some ways, the actual relationship between the two artists never existed. But the connection certainly did.

They flew in close circles. Mexico and Russia have shared a historic moment, and Mayakovsky visited Mexico and met (Frida’s husband) Diego Rivera during 1925. At the time Frida was in the hospital, having suffered an accident that left her bedridden. Therefore the two hadn’t met then, or ever again. Mayakovsky was at the time madly in love with Lilya Brik, a manipulative Futurist hussy, I mean muse, and later had a whole string of affairs with gorgeous poetesses, activists and models before committing suicide aged only 36. Frida Kahlo suffered a violent marriage to Diego Rivera and died not much older, aged 47. 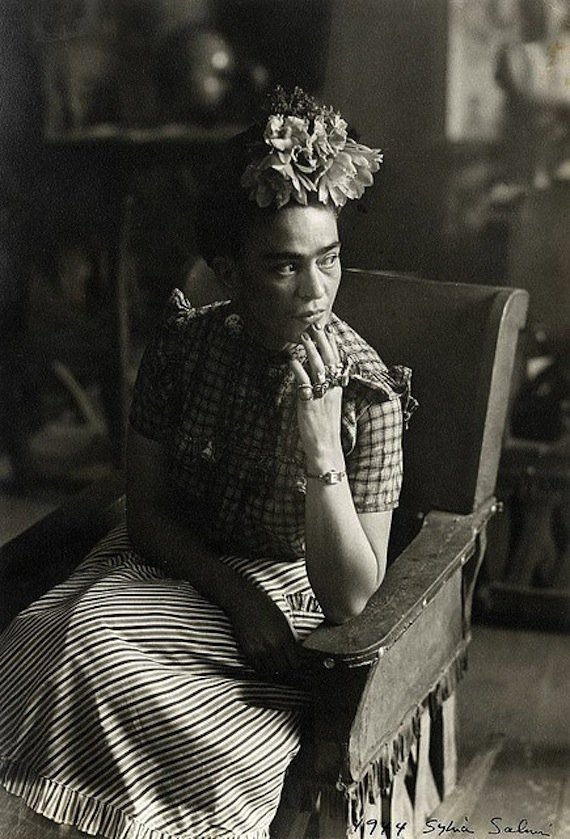 Frida wonders if she remembered to water her headdress.

None of which matters. What they had in common was the world of ideas. Kahlo and Mayakovsky were both patriots, champions of their countries’ freedom, children of two revolutions that ignited the twentieth century. They both blended the national and revolutionary ideas into their work. Mexican and pre-Columbian culture forms a backbone of Frida’s painting as well as appearance.

Mayakovsky, who took part in his first socialist demonstration aged only 14, was a trailblazing leader of Russian Futurist movement and an avant-garde poet that celebrated the fruits of the Russian revolution. As a young activist, he was involved in smuggling female political prisoners out of jail, which ended with his arrest and rebirth as a poet. His passionate poems and the Futurist Manifesto, A Slap in the Face of Public Taste, made him the equivalent of a rock star in 1920s Moscow.

The photograph is a fantasy, but it depicts a desirable poetic reality. Far too often we see Frida Kahlo with flowers in her hair, unborn babies sprouting from her gaping belly, looking like a less agile Carmen Miranda.

Too many images show the brooding Mayakovsky looking like a thuggish bouncer, especially in Rodchenko’s photographs. In contrast, the fake composite shows the young poet in a flouncy blouse, hair ruffled, painter’s frock spreading like a dress. Frida looks wilder with a gun replacing the brush. One can imagine them both being dressed by Aleksandra Ekster, into swirling wide red ribbons, looking utterly iconic and defiantly staring into their uncertain future.

Fashion is a fantasy. So is life; but to make life, art, fantasy have a meaning, we imagine the meeting of these two strong souls and it lifts the veil of possibilities for our future revolutions.

Vladimir Mayakovsky at the Moscow School of Arts 1910.

Mayakovsky with the other Russian Futurists.

Young Mayakovsky was very fond of the pussycat bow.

Young Kahlo as if dressed by Yamamoto.

Aleksandra Ekster’s designs for Romeo and Juliet would fit the pair perfectly.