Vintage handbags are an important accessory to any outfit , as well its functionary use, handbags finish off an ensemble along with a pair of good shoes and coat. Where would we be without a good bag? Today, there are as many bags and wallets as there are shoes, and it would be unthinkable to go out without one. Whether you have a coveted designer classic or a high street shoulder favourite, vintage handbags are a girl’s best friend.

The symbolic beauty of the handbag

A handbag was a symbol of a woman’s femininity, success and independence. The more expensive the bag, the more successful the owner, However, vintage handbags were seen as much more than just an investment, they were a symbol of her style and taste, just as they are today.

Handbags have been around for the past 20 decades, although they weren’t always seen as an essential accessory to an outfit. The forties remain one of the favourite decades for vintage fashion, however, vintage handbags during this time, suffered as a result of the Second World War, as did most fashion items, due to a shortage of fabrics and rationing of materials.

‘Make do and mend’ wartime ads

The war years took their toll

The forties however, revealed the resourcefulness of the war years, and a woman’s ability to turn her hand to almost anything if the circumstances demanded it. The “make do and mend” mantra of the Second World War was taken seriously and handbags were handmade and home-made to suit the austerity of the war years. They were also a symbol of a woman’s increasing independence and self-sufficiency, they represented not only the utilitarian nature of the times, but the changing roles of women.

The fifties however saw a return to fashion and the introduction of new processes and materials. In this blog, we’re going to take a look at the development of vintage handbags from the forties through to the fifties.So if You are a fan of vintage forties and fifties fashion, pay attention.

The first half of the 1940s was dominated by the war and as a result fashion suffered. Materials and fabrics were rationed and often used to facilitate other, more important uses. This led to women all over the country turning to knitting, crocheting and sewing to create their own bags and their own trends. Confiscated materials were replaced with wool, plastic and rayon. Little crotched drawstring bags and knitted lantern bags were popular while machine-made handbags were made from rayon and plastic. They were a world away from the glamour of thirties art deco and were representative of the military dominated years.

The end of the forties saw a slow return to fashion, with more emphasis on accessorizing. While the forties bag had been practical, angular and utilitarian, the late forties and early fifties saw the handbag change shape and become sharper, angular and more decorative. 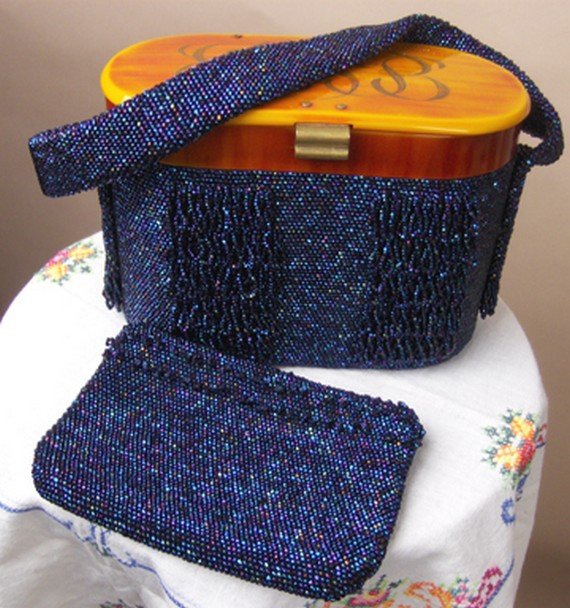 The 1950s saw a return to fashion and the growing popularity of the handbag. The fifties isn’t always seen as a particularly exciting era for fashion for many, but only as an extension of the forties and the drabness of the post war years. But the fifties was far more than that and was a gateway to women’s fight for independence which gathered pace towards the end of the fifties.Through technological innovation, and prosperity for the middle classes, fashion became more elaborate with an increase in designer wear and more ostentatious gowns. It was almost as if it was making up for all it had gone through during the war years.

Vintage designer bags on the increase

For vintage bags it was an exciting time, designer bags were making waves with Hermes, Chanel, Gucci and Dior. The economic prosperity of the fifties meant that women had much more to spend on accessories than before.Styles were dominated by short straps with bags hand-held close to the body.More exotic materials included crocodile and alligator as well as Lucite and wicker. Leather of course became a popular material again following the austerity of the war years. In 1955, Chanel’s black quilted handbag took centre stage.

For me, the fifties are a perfect time for vintage handbags and their styles are still mimicked today with similar styles. Go with retro bags if you wish, but if you can source a vintage 1950s handbag then you could find some gems out there. Many are in near perfect condition and there’s nothing like the real thing. Enjoy your treasure hunt!