The Baroness Elsa von Freytag Loringhoven was a maniac fashion original, outside of conventional fashions for the Victorian, Edwardian, and Jazz age which she lived through.We often look to film stars, rock singers and celebrities for our inspiration on how to wear fashion, and in the past on this blog we have featured fashion legends such as David Bowie, Marc Bolan, and Lily Allen.

The fashion star I’m presenting to you today isn’t a pop singer or popular actor however – she was a poet, artist and provocateur, and if she was still alive, she’d be 140 years old.However, this is not an article about period fashion or styles that seem quaint or curious to us today.


In this image, where’s she’s clearly playing dress up and having a posing party (look at all the other garments strewn about!) her leggings look like graphically printed cycling shorts from the 80’s, and her bustier top is very 80’s too.

In fact, the whole thing looks a lot like Grace Jones body painted by Keith Haring:

Elsa von Freytag Loringhoven’s outfit is made of appliqued ribbons on the trousers, and the way they dangle may be an hommage to a jester’s outfit.

She is wearing parti-coloured ballet pumps, and the top is made entirely of different widths of ribbons, from what I can see. Her outfit is very daring; if you look at swimming costumes of the time, it’s actually skimpier.

Only exotic dancers of the time (Mata Hari, I’m looking at you) revealed their bellybuttons quite so charmingly. 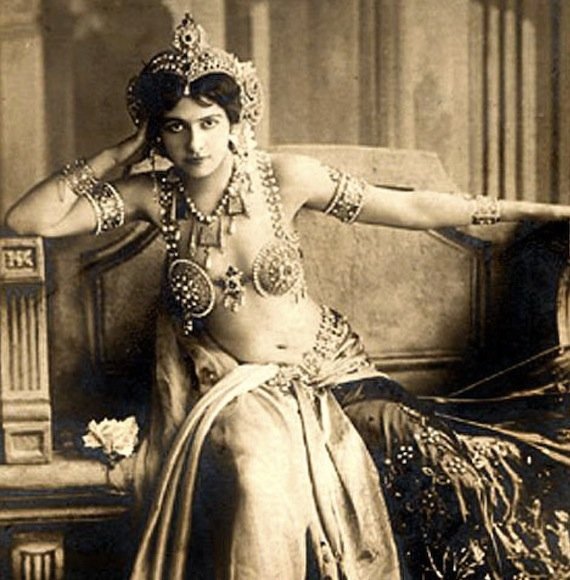 Although you may say well, she’s only wearing this in the privacy of her own home. No fear – what she wore in public was even more revealing.

When she met the artist, George Biddle in 1917: “With a royal gesture she swept apart the folds of a scarlet raincoat. She stood before me quite naked—or nearly so. Over the nipples of her breasts were two twin tomato cans, fastened with a green string about her back. Between the tomato cans hung a very small bird-cage and a crestfallen canary.”

“So she shaved her head. Next she lacquered it a high vermillion. Then she stole the crepe from the door of a house of mourning and made a dress out of it,” Margaret Anderson, her editor at The Little Review remembered. When she got to The Little Review offices later in the day she dumped the crepe. “I’m better when I’m nude, she said.”

The Little Review was a seminal magazine at the time, and regularly published her poetry alongside that of James Joyce. Many of her poems have recently been published in a collection entitled Body Sweats – The Uncensored Writings of Elsa von Freytag Loringhoven edited by Irene Gammel and Suzanne Zelazo. The publishers, MIT Press, describe her work:

“With its ragged edges and atonal rhythms, her poetry echoes the noise of the metropolis itself.”

Her love poetry muses graphically on ejaculation, orgasm, and oral sex. When she tired of existing words, she created new ones: “phalluspistol,” “spinsterlollipop,” “kissambushed.” The Baroness’s rebellious, highly sexed howls anticipated the Beats; her intensity and psychological complexity anticipates the poetic utterances of Anne Sexton and Sylvia Plath.”

Elsa von Freytag Loringhoven-There are no photographs of the Baroness with a shaved head, but here’s someone who was inspired by her style

There are no photographs of the Baroness with a shaved head, but here’s someone who was inspired by her style.