Although frequent and regular concerns about the health impact of corsets have been raised, successive designs, meant to improve on the old ones in that regard have either raised a different set of problems, or become quickly outmoded.

Over the last 200 years or so, women’s corseted torsos have been squished, squashed, uplifted, padded and generally rarely left alone by their undergarments.

A woman may have rejoiced in having the correct shape for fashion one moment, while her sister needed to strap herself into a corset to achieve the desired contours. A few years later, the positions may well have been reversed.

Corsets also changed with improved technology, declining ecology (in the case of the near extinction of whales used for whale bones) and wars, dance crazes and sports.

Corsets have also existed throughout history for men.fashionable dandies, the military man and those needing some medical support, as well as those with a fetish for constriction have made use of their properties. But the following run down focuses on women’s silhouettes.

Think Jane Austen. A quick scan of period dramas from this time will confirm the extremely high waist and youthful look of the time, meaning a mini corset, almost like a modern longline bra (appropriate since fashions concentrated on the bust more than anything) was all that was needed. It lifted and separated the breasts.

50 years later, the line of the corset has dropped once more to an hourglass figure, flaring over the hips and covering the abdomen. The wearing of the corset was made a lot easier for those without ladies maids by the invention of the split steel busk (the front support for any corset). It meant that although the lacing was still at the back, it fastened at the front, and you could put it on and pull the lacing tight yourself.

At the beginning of the century, the “S Bend” corset (so-called as the wearer’s body curved into an S) was introduced as an alternative to the hourglass – but in completely enveloping the hips and reaching right down to the groin at the front it was more uncomfortable than ever.

By Edwardian times, health campaigners had succeeded in reducing the corset once more – this time in a different direction to a century ago. The underbust corset was cut under the bosom for easy movements, although still waist cinching. It created a matronly silhouette as unconstrained breasts were left much to their own devices.

Queen Alexandra herself was a good model for the Edwardian sloping bosom. Of course if you didn’t happen to have full, pear-shaped breasts, corset manufacturers were there to help you, and you could get padding to put under clothing for the purpose, or even a corset that shaped you to this ideal.

“Healthy” corsets included those made by Jaegar, the firm still associated with high quality wools, which were made of wool and had shoulder straps, ribbon corsets which were dainty and minimal, and looked as if they were made from strips of ribbon, and, wait for it – Aertex corsets. Yes, the hated material of your school PE shirt was invented for use in corsets to let the skin breathe. They were worn for sports and cycling particularly.

By now the focus has dropped even lower, and fashionable women wore not so much a corset as a girdle. The boning was concentrated across the tummy to create a young, flat silhouette, with smoothed bottom and thighs. A separate, light bandeaux bra was worn on top. Because you couldn’t really dance the black bottom or other cool, frenetic dances wearing a corset. 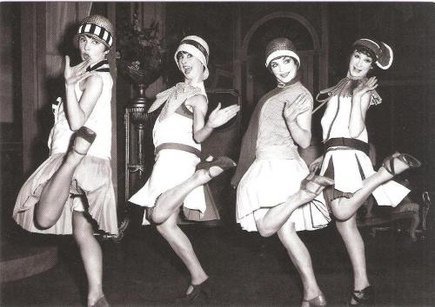 A return to feminity, and Christian Dior’s New Look designs – full skirts, tiny waists, needed a waist nipping “waspie”. In 1929 the ideal waist size was said to be 29 inches – in 1948 it shrank to 20. The waspie was more like a very tight belt than anything, only about 10cm deep and using new materials such as plastic boning and nylon elastic fabric.

1960 – In the 60’s and 70’s you were really expected to go it alone, and create a slender appearance though diet and exercise. You could get a little assistance from lycra and powermesh, though.

The vogue for both burlesque and old-fashioned lingerie styles, popularized especially by companies such as Agent Provocateur, has brought back the Victorian style corset, more for fetish and evening wear than as serious undergarments. Modern plastic boning, power mesh panels, and their occasional, as opposed to every day use, has rendered them much more comfortable than those our great-great-grandmothers suffered with.

Check out how high can you rise with high waisted fashion