Anna Wintour is known as the most powerful woman in the fashion industry. Her endorsement can make or break a designer or fashion brand and she is a staple of every major fashion week front row. She is now the editor of American Vogue, but she spent two years as the editor at British Vogue first, from 1985 – 1987. Wintour was not a popular boss, making huge changes at the magazine, firing many key staff and demanding the remainder work far harder, in a far less fun atmosphere. The newspapers dubbed her “Nuclear Wintour”.

Anna Wintour was a very influential Vogue Editor in Chief.

Anna Wintour was born on the 3rd November 1949 in London. Her mother was an American, Eleanor “Nonie” Trego Baker, and her father was English, Charles Wintour, the journalist and editor of the Evening Standard. I imagine she got inspiration on her behaviour from him: one ex-employee said “When you meet Charles Wintour, you’ll be put off by his rather glacial exterior, but when you get to know him better you realise it’s only the tip of the iceberg.”

Wintour was brought up in an atmosphere of money and privilege. She said to be a bully at the series of private schools in North London that she was sent to, and uninterested in academia. She was mainly interested in herself, having weekly facials from her early teens and obsessively watching her weight – she was very thin. At the age of fourteen she had her hair chopped into its famous bob, which she has stuck with ever since. She often skipped classes and loved clothes and clubbing. Her father often consulted her on fashion ideas for his paper. Wintour left school at the age of sixteen, walking out after an argument over uniform.

At the age of 21, Wintour’s parents threw her a birthday party at the Savoy hotel. By then she had two huge inheritances from distant relatives, which funded her for life and allowed her as many designer clothes, luxury cars and expensive apartments as she could ever wish for. What she also wished for was a job in fashion, specifically on fashion magazines. These positions never paid well, but it didn’t matter to her. 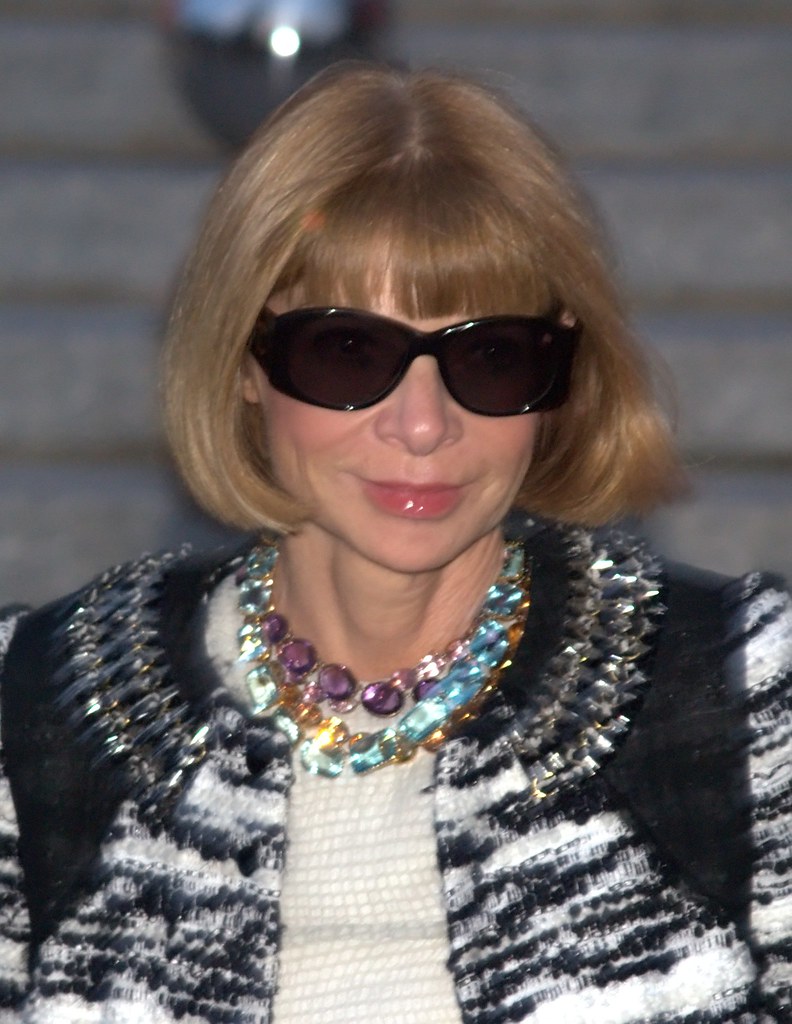 She got her first job on the basis of her look, though she had no experience. Harper’s & Queen took her on as a fashion assistant. Soon, she was promoted to assistant fashion editor. She never socialised or spoke to any of her colleagues outside of work, and was rude and imperious during work hours. She had also started wearing her massive trademark sunglasses. Many have laughed at her for this affectation, especially as they are often worn at night too. But it is likely that they are corrective lenses. She went after the job of fashion editor when it fell vacant, though she had hardly any experience. It went to Minnie Hogg, a very experienced journalist. Wintour tried her best to undermine her, and eventually was ousted.

Moving to New York in 1975, she soon got a job at Harper’s Bazaar as a fashion assistant. She had very strong ideas of what a fashion shoot should look like, even if her ideas didn’t fit the brief. Her bosses were astonished at her unwillingness to compromise, as she was just a junior. After nine months she was fired.

These caught the eye of Alexander Liberman, the director of Vogue. He asked her if she wanted to become the creative director at American Vogue – a new role. It was an awkward position, officially below the editor, Grace Mirabella, but with a definitive say in many departments. She openly criticised Mirabella in meetings, and caused confusion elsewhere, until she was actually banned from involvement in the fashion section. According to rumour, she took this hard, bursting into tears all the time and crying down the phone every day to her fiancé. It was hard for Vogue management too – they valued her work but the confrontation was horrendous.

What Wintour wanted was the for them to give in and give her the editorship. What she got was unexpected – the editorship of British Vogue. Beatrix Miller was retiring. In 1985 Wintour moved to London with her two month old son Charles but without her now husband, David Schaffer, a child psychologist who had to stay in New York for work. Two years later she had another child, Katherine, known as Bee.

In her very first issue of Brogue she began by firing two fashion editors, a restaurant critic, living editor, nutrition editor, and associate editor for features. In the second issue went the features editor, and the drama and film critics. Many of these were old family friends and had known her since childhood. Wintour also redecorated the offices, which were shabby beyond belief, and the style of the magazine changed too. Instead of intelligent, whimsical, ironic and slightly eccentric, it became hard edged, clean and all about the power suited woman.

Anna Wintour herself got up at 5am, spent an hour playing tennis, an hour at the hairdressers and having her makeup done, before arriving at the office for 8am. She goes to parties, but it’s for work, and she never stays more than twenty minutes. She’s in bed for 10pm. Her staff and readers should ideally have the same discipline. The staff, at least, resisted. Many who weren’t fired left for a more congenial atmosphere. The readers were indifferent, and circulation and advertising did not improve.

In 1987 Wintour herself was removed. She wasn’t sacked, but given House and Garden, another Condé Nast title, to play with. She did the same as she had at Vogue, and implemented mass firings and changes, including changing the name to H&G. Her photoshoots featured skinny models populating the interiors, and the press called the publication “House and Garment” and “Vanity Chair”. After 8 months, the magazine folded.

Perhaps surprisingly, Anna Wintour’s next position in 1988 was the one she had always dreamed of. She was now the editor in chief of American Vogue. She has been in that position ever since. Wintour took with her the same attitude and reputation of being hard edged and demanding. It was skewered in the massively successful book, and even more successful film, “The Devil Wears Prada”, written by an ex-assistant and starring Meryl Streep. Wintour has also been targeted by animal rights activists for her love of fur. In response, she participated in a documentary, The September Issue, released in 2009. It redressed the balance and helped to humanise her. Her reputation has steadily improved since, and now she is regarded as kind of loveable.