The Ultimate Guide to 90s Clothes and How to Wear Them

90s clothesFashion in the 1990s consisted of a whole range of styles. 90s clothes are exemplified by different musical styles, and different designers.  We had vintage-raiding Grunge, the cute shrunken t shirts of Britpop, sportswear wearing rappers, and mournfully black-wearing Emo bands. There was also the crop tops and cargo pants of girl bands. Ravers and fans of the Madchester scene wore their favourite baggy 90s clothes.

On the 1990s fashion designer front, Calvin Klein introduced a range of neutral colours, Donna Karan was re-inventing the wardrobe for working women, and Ralph Lauren making breathtakingly elegant and simple occasion wear. Azzedine Alaïa was still focussing on body con dresses and John Galliano and Alexander McQueen were both in the headlines for their shocking antics.

The 90s clothes look we’ve put together for you today is based on the vintage look sported by British pop stars like Pulp. We’ve also been influenced by the old-school raver, a traditional Greb look, the classic film Clueless, and the chic European visitor to London, who even then wasn’t afraid of colour, although naturally it should all match impeccably. 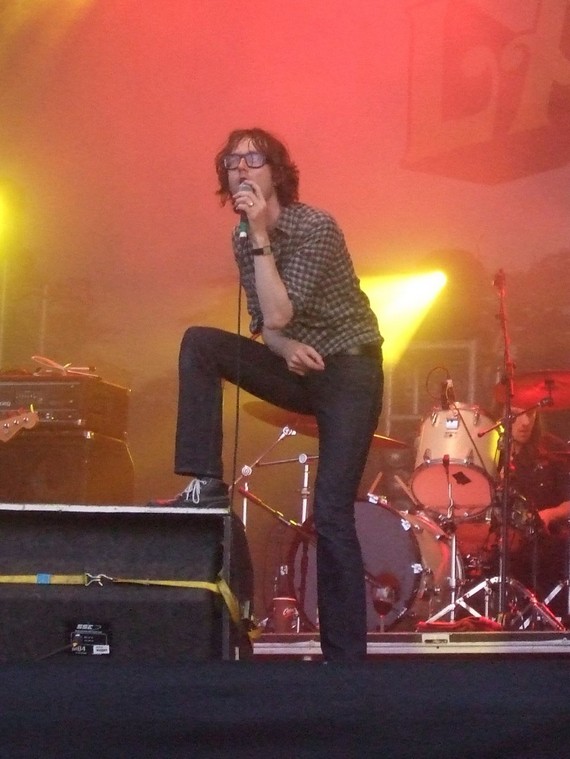 Jarvis Cocker at the Latitude Festival

Remember the song Common People by Pulp? If you don’t know it, you must listen to it now. The lyrics concern a brave but bewildered protagonist as he attempts to help a rich Greek student live the common life in England. Besides being incredibly catchy, it was also funny and sharp, and besides that, the angular lead singer, Jarvis Cocker, dressed in his charity shop 90s clothes cast offs, looked absolutely amazing in his very fitted suits with his tiny pout.

Voice of the disaffected nation

Jarvis became one of the voices of the disaffected nation and advanced the cause of vintage mismatched dressing. We couldn’t afford designer labels and the British have always been known as quirky dressers. In the 90s, following Jarvis’s lead, we quirked it up to the max with satin shirts under our corduroy jackets and a hint of eyeliner around our world weary eyes. Nowadays Jarvis’s suits are custom made corduroy and his look bespeaks more “Forgetful Grandad” than “Deliberately dishevelled arty pop star” but I still get a thrill when I see him at Frieze art fair. 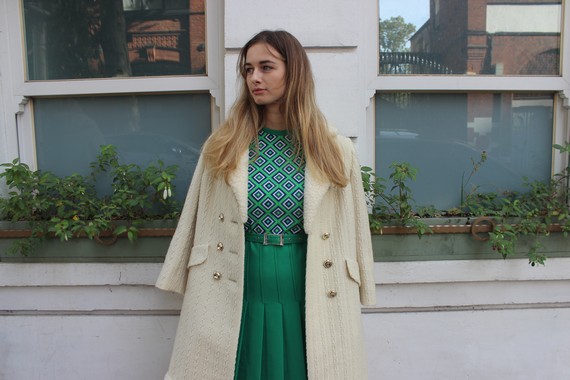 Green knife pleated skirt along with a top in diamonds of green, blue and white

The other looks we’ve got going on here are in deliberate contrast to our quirky British dresser. It’s the Greek heiress of the song, who is wearing a matchy matchy outfit of green knife pleated skirt along with a top in diamonds of green, blue and white. Over these 90s clothes she has thrown a cream coat with gold buttons. It’s best if us Brits don’t wear cream, we’ll only get it grubby. 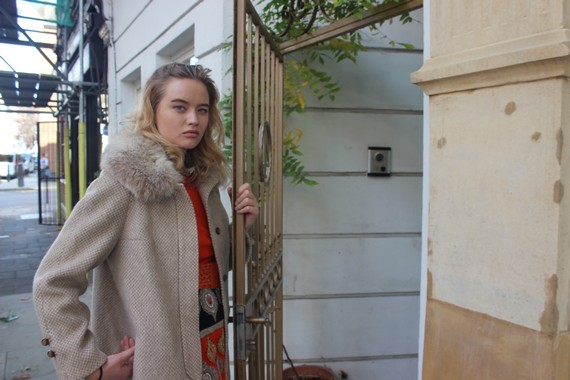 Our other 90s clothes Euro Princess has a classic Versace patterned skirt of red, black, yellow and white with her matching scarlet top and disdainful stare. She has gone for the opaque black tights and block heels necessary for the British winter, and a beige fur collared coat. 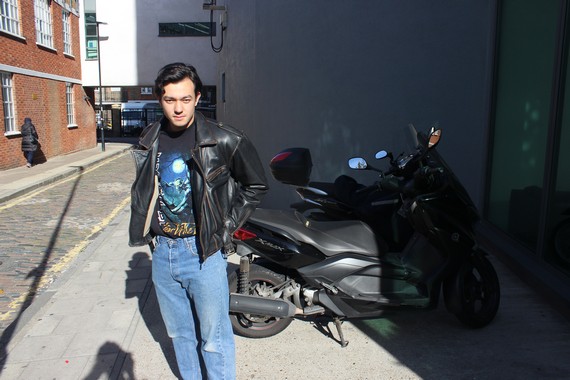 The Greb, or Grebo, was a greasy haired hangover from James Dean’s 1950s heyday. He has long hair, a t shirt, leather jacket and jeans. But James Dean, for all his rebelliousness, was actually rather clean cut. He wore a nice colour scheme of block colour basics: plain white tee, dark indigo jeans, black leather jacket, neat haircut. Our Grebo would not touch a white t shirt if his small collection of Jane’s Addiction vinyl depended on it (in the 90s our vinyl records were non-ironic). He always wears a black print t shirt with his black leather jacket, and black or very washed out jeans. He looks a little mismatched and grubby because again, he’s British and we didn’t believe in clean and chic. We are too individual for that. 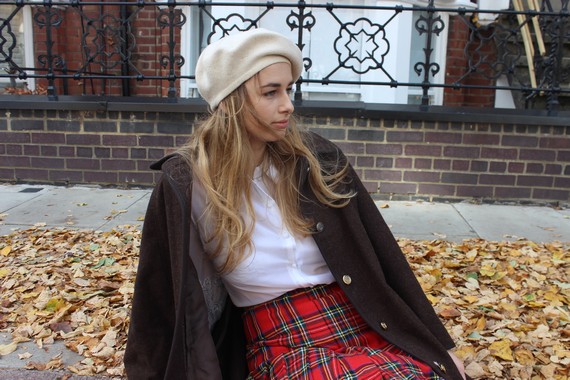 The Girls From Clueless

We did a look paying tribute to Clueless because it was the film of the 1990s, coming out in 1995 and making Alicia Silverstone’s career. If you were in the know, it was a knowing remake of Jane Austen’s Emma. If you didn’t catch that, it was a really fun movie with enjoyably bitchy characters who had endlessly quotable lines. In addition, the outfits are iconic and instantly recognisable. Iggy Azalea basically condensed the whole film including costumes for her video for Fancy, 20 years after the film was released.

Our own Clueless outfit features a kilt (of course), a neat white shirt and a perky beret. 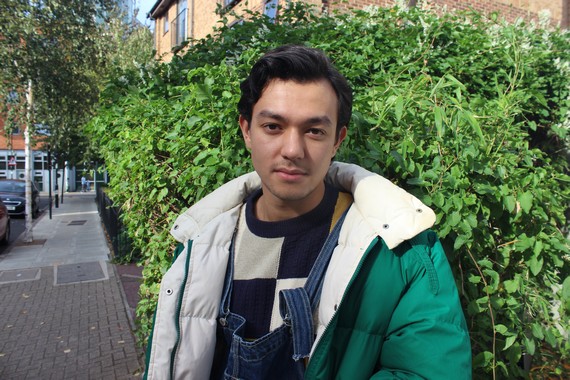 The Old School Raver dressed mainly for comfort in 90s clothes on the dance floor. Or what passed for the dance floor in the old and extremely dangerous old warehouse the illegal rave he was attending. Since this dance floor was likely made of filthy concrete and awash with beer cans and spliff butts, and ravers were as likely to sit on it in groups, earnestly discussing conspiracy theories as dance on it, the outfit had to be fairy sturdy. Other dance floors might include forests, fields, and various other derelict buildings, since raves were excitingly banned and the locations scouted out in advance and only revealed the day of the event.

Oversized denim dungarees are the ideal garment for this purpose. You won’t be too cold on the bare concrete or mud, or too hot when dancing for sixteen hours straight. You can put a bright t shirt underneath to catch the eye and delight fellow revellers, and a padded jacket underneath to use as a pillow when you finally crash. 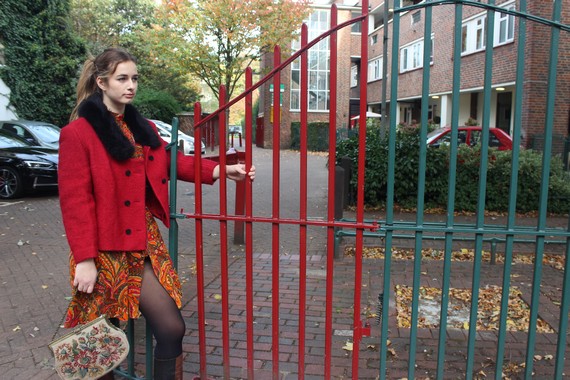 We all have Vintage Queens in our lives. She’s the one who can disappear into a vintage shop for hours on end, with a whole heap of unlikely looking 90s clothes slung over her arm, and come out with five fabulous, fully accessorized outfits.

Those Vintage Queens existed in the 90s too. If anything, their look was wilder because mismatched, even jarring outfits were in. If you had the natural je ne sais quois to carry it off, you could wear just about anything.

Our first 90s clothes Vintage Queen is wearing a simple, yet Christmassy outfit of a vibrantly patterned 70s frock, with 80s leather knee high boots and a red coat with black faux fur trim. Wildly dissonant is the handbag, in a cream needlepoint floral design. Delicately feminine, it could be from any era but I’m going to settle on the 1950s. 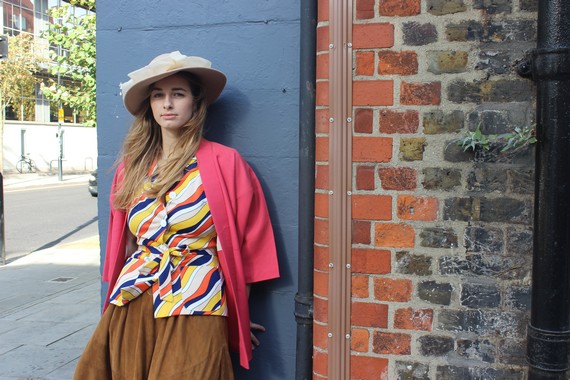 More Queens – and a King!

Our second 90s clothes Vintage Queen is also exhibiting a good 50s-80s date range. She has chosen a violent 70s pattern for her shirt, and is teaming it with a full brown 80s skirt. With this she wears a hot pink kimono and she has topped it with a cream straw hat with a chiffon ribbon. 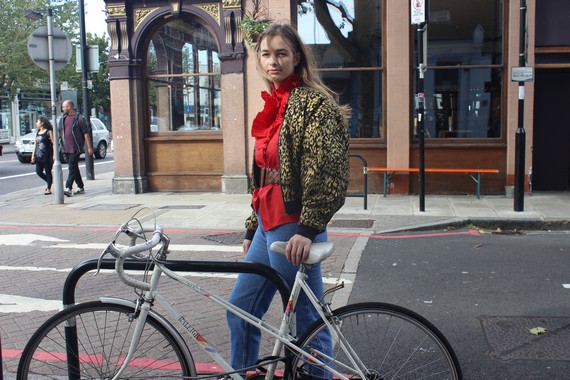 Our third 90s clothes Queen is making a feature out of a striking scarlet ruffled blouse, which she makes stand out with a big belt and contrasting patterned bomber jacket. To stay comfortable whilst cycling she sticks to jeans. 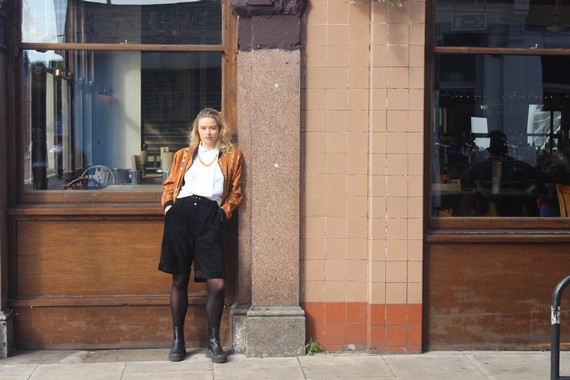 The fourth Queen of 90s clothes has given us a little bit more of a smart look. She is wearing knee length smart shorts with black tights and the quintessential 90s black stomper boots, with a neatly tucked in white shirt and a flash of colour with her orange striped bomber jacket. 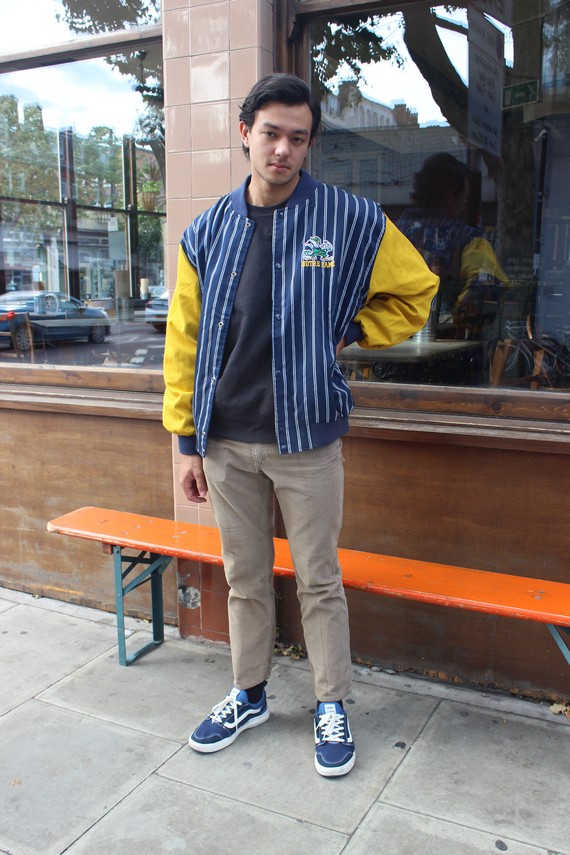 The Vintage King of 90s clothes is also keeping things down a notch or two with his own bomber jacket, a bright yellow and blue and white striped number, worn over chinos and a black sweatshirt. His sneakers match the colour of the jacket. Nice!

90s clothes – Do it Yourself

We hope that this gives you some inspiration for how to dress up 90s clothes in style. The beauty of the trend is that there is no need to slavishly copy any of these looks since they are made with unique vintage elements. But they can be put together in any of these different ways and it will be never be wrong.