Punk is alive and well! With so many punk rockers from the seventies and eighties marking their revival with “farewell tours” recently, punk 80s fashion is back in vogue.

There’s no secret about punk clothing – It’s a form of open rebellion! And with so many movements on the rise – a.k.a. “Occupy”, “Save the…” and “Matters” – it seems like punk 80s fashion has also made a revival alongside them. 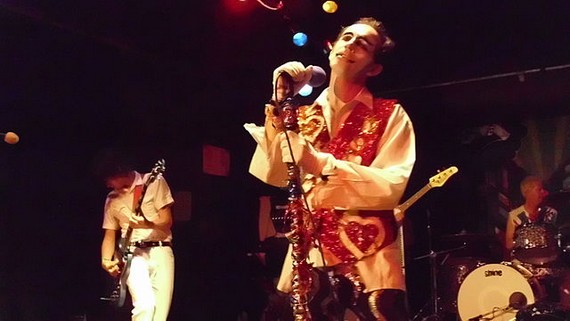 The origins of punk 80s fashion in the U.K.

While some of us might look at punk style as just a clothing design phase that the world saw – like ultra- short skirts and platform shoes – it was actually more than that. Rather than being a product inspired from artist renditions of sketches and mannequins in a drawing studio, punk 80s fashion was created from “attitudes”. It’s the reason that many men and women embracing the style refer to it as “attitude fashion”.

And punk isn’t just the only type of fashion that rose from attitudes and personality traits. If you cast your eyes around, you’ll see a large number of people sporting widely ranging fashion pieces that somehow don’t “fit in” with contemporary designs. Some of them are inspired by Emo culture and the Goth sub-culture. And like punk 80s fashion, you’ll even see people on the streets, in busses and the tube wearing hip-hop style and heavy metal fashion-inspired clothing.

The rise of punk fashion is in fact rooted is a sense of rebellion against the excesses that rockers (and their masses of followers) saw in mainstream society. To make their feelings known, they turned to “minimalism” in their fashion and accessories. Punk 80s fashion was a definite rebuttal of what they (the rockers) perceived as “over dressing” and over indulgence.

Originating in the U.S., this rebellious streak sparked an entire new fashion frenzy that further fuelled punk 80s fashion and propelled it into the mainstream all across the U.K.  And while a general feeling of revolt lays at the heart of this fashion trend, English punk band groups like The Jam and Sex Pistols also played their part in advancing the cause for a new fashion era. 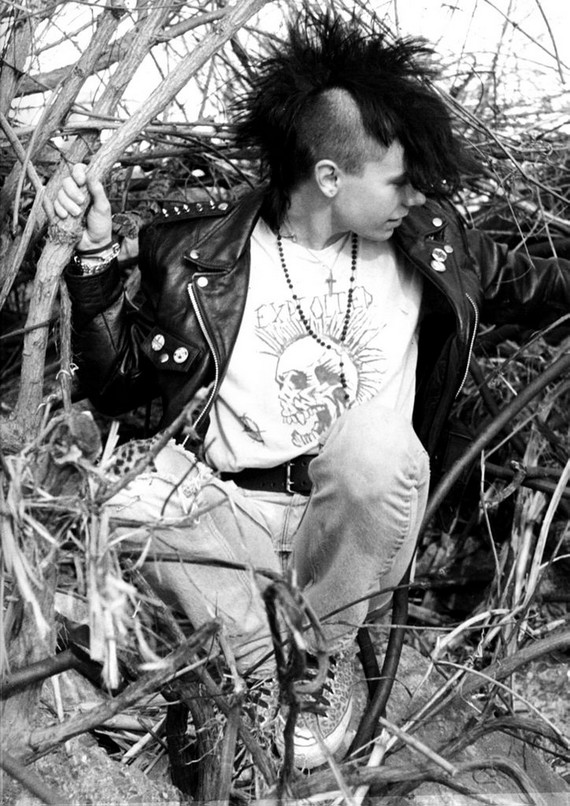 Profile of punk clothing and personality

Quite contrary to the prime, proper and pristine appearance of most cat-walkers in the “contemporary” scene, punk 80s fashion wearers today are worlds apart from their peers. Today, those who embrace the 80s punk look sport short hair and an oft-unkempt look. And typically, you’ll see these supporters of punk fashion in clothing that are stereotypical of that era.

And what would that look like? Well, you’ll never see hardcore punk lovers without a few signature pieces that make up their ensemble. No diehard punkers wardrobe would ever be complete without the basics: I’m talking about the leather jacket and an accompaniment of trousers to go.

Typically, the trouser of choice for the avid punker was the skinny jeans. The more worn-out and tattered the jeans were, the better fit for the punker’s personality they were considered to be. The objective behind classic punk was to look unwashed and un-ironed anytime of day or night. After all, a rebel didn’t have the time or luxury to “freshen up” to pose for the cameras or on stage! 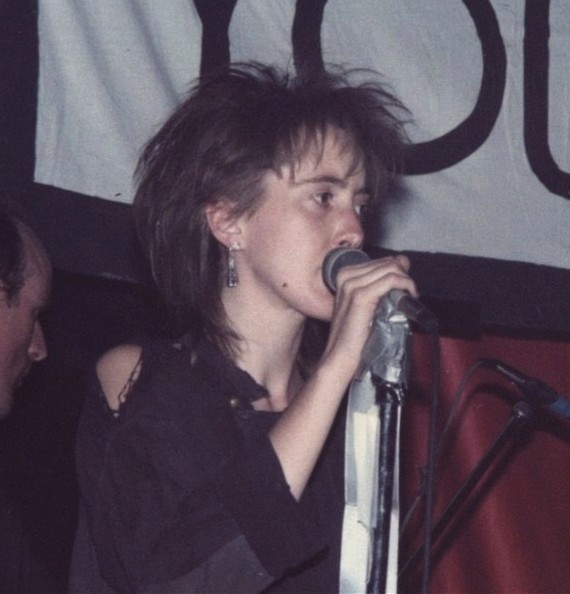 A stereotypical profile of early punk 80s fashion was very successfully portrayed in the musical The Rocky Horror Show, that debuted in London’s Royal Court Theatre in the late 1970s. The show, which finally closed out in September 1980, gives us a glimpse of the emergence of transvestism, where men and women dressed to take on the appearance of the opposite sex. And that was a popular theme reverberating throughout British glam rock culture of that time!

The typical lover of punk fashion was someone who didn’t really care about what others thought about him or her. They were very confident in their own personalities, and didn’t need anyone to validate who they were or what fashion trend they followed. In fact, punk clothing didn’t start out as a fashion movement. On the contrary, many self-professed punk rockers would be proud to admit that their dress code of choice was “anti-fashion”! 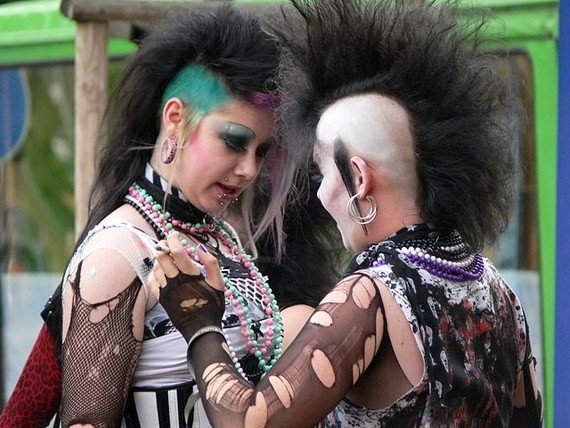 You really don’t need too much accessorising to truly play the part of an 80s punk icon. Remember what we said at the start: Punk style is all about minimalisms? What that means is “less is more!”. And even the few accessories that are hallmarks of the punk movement are so commonly available, that you could very easily create your unique version of punk fashion with whatever you already have in your wardrobe.

With so many revival concerts happening all across the U.K., it’s very likely that you – or someone you know – has one of those band t shirts tucked away at the back of your closet. It really doesn’t matter if it’s a tee inspired by the new wave of Brit heavy metal, or a t-shirt celebrating bands like Cockney Rejects, or punk clothing representing Sham 69 – it’s all good! 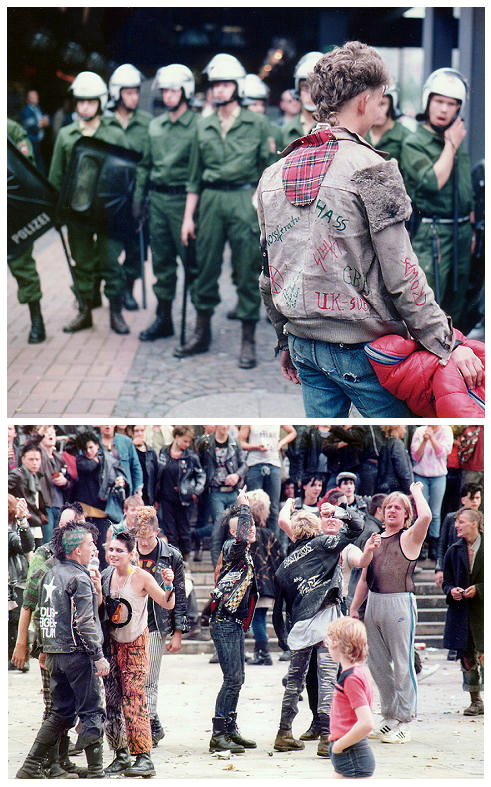 A popular fashion trend from that era was to wear those band t shirts untucked – hanging lose over your skinny jeans. And don’t bother ironing or washing your tee – that’s so not what the 80s punk fashion is all about. Besides, when you wear your leather jacket over your t-shirt, it won’t matter anyway!

Of course, no self-respecting punker would be caught strolling down the street without a pair of combat boots.  Typically, the leather top and leather footwear were very overt signs that the rocker crowd disapproved of the finer weaved fabric that were popular in the 1970s and 80s.

Punk 80s fashion lovers today can also be seen wearing another popular staple accessory from that era: Studded belts!  You can use sites like Edward Betts to find links online to source your belt needs. Unlike other contemporary fashion trends of that era, where the belt had a functional dimension, punk rockers didn’t really needed their belts to hold up their tight jeans around the waist. In that respect, the belts truly served as an accessory. 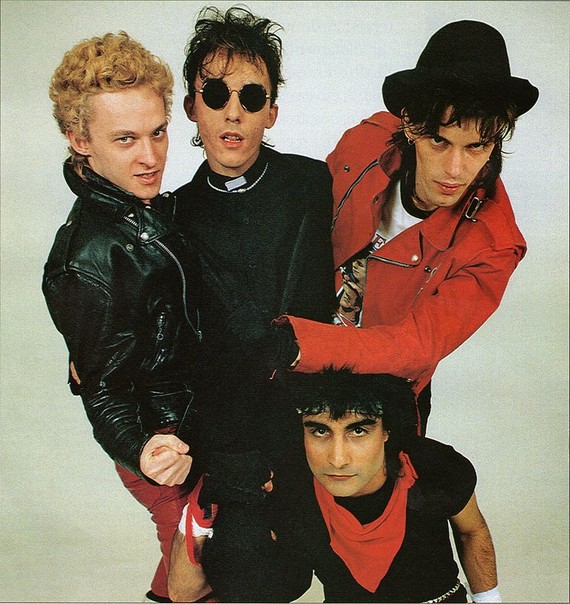 Fortunately, for punk clothing lovers today, it’s easier than ever to ride the popular trend of going punk. Going online is the best way to start your quest to getting everything you need to assemble your punk 80s fashion ensemble. Start your search at Blue 17, by browsing through their vintage collection. You’re sure to find widely ranging fashion ideas to complement your punk look.

At Simplyeightees, you’ll find a wide selection of punk style fashion that you can use as inspiration to assemble your own 80s punk classic look. Search through their vintage section for that perfect leather jacket, or look through their massive collection of retro and 80s band t shirts to get you started.

And since embracing that true spirit of punk 80s fashion is all about unleashing that inner rebel in you, you’re guaranteed to find great inspiration at Rebels Market. This site is a true punk rockers heaven, where you’ll find everything you need – from studded jeans and belts to leather pants and jackets.

And of course, men and women who consider themselves true connoisseurs of punk fashion, should search the vast archives at Who What Wear to get some true insight into what makes punk really rock!