To conclude my series on Poldark, with –Poldark Style -part 4, having spoken of the style of costumes of Verity in the Poldark series, which you can still catch on BBC iplayer if you’re quick, I want to turn now to the other main female characters, Demelza and Elizabeth.

Elizabeth is a stylish beauty, and her dark, glossy mane and big brown eyes are perfectly set off with her blue velvet riding jacket which she wears with a mini cocked hat (she has a brown velvet one of exactly the same cut).

I think that she looks great in those richer colours and so her ballgowns are quite disappointing: frilly things in drab dusty pinks which the actress, Heida Reed, mentions were dyed and re-dyed by the wardrobe department to suit her skin tone perfectly.

It’s interesting to note here that the simpler style of Regency dress that you may be expecting (perhaps you are familiar with it from Jane Austen dramatisations) – the ones with a high waist line, drifting white muslin, flowing shawls and hair like a Greek Goddess – isn’t present here, Poldark Style. Jane Austen’s “Sense and Sensibility” was written in 1811, thirty years before these books begin, in 1783. 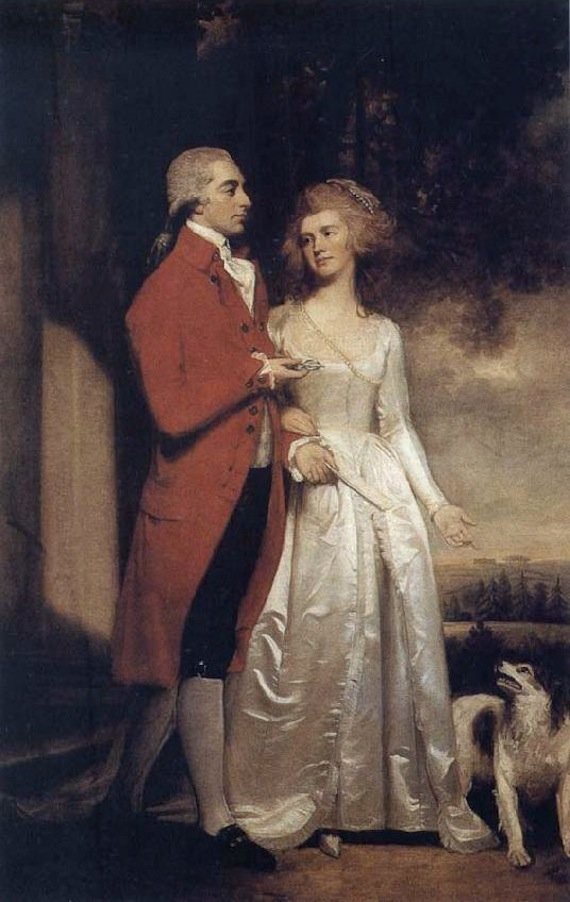 1786 Sir Christopher and Lady Sykes strolling in the garden at Sledmere by George Romney. 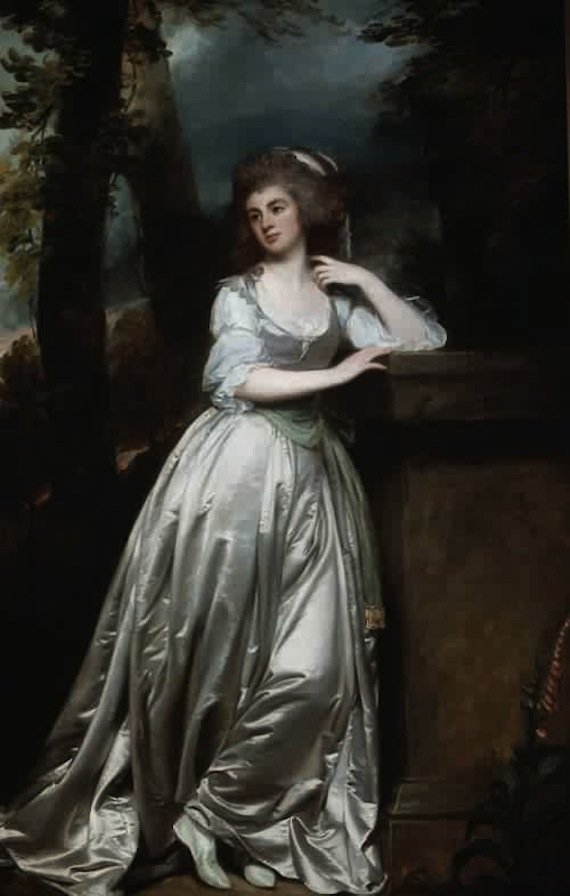 So these ballgowns look very different. They have a low décolleté, and a slightly push up bra effect resulting from the corseting, which reaches to the natural waist ending in a slight point over the abdomen. Skirts are full, but not huge, (no crinolines here; if anything, they would have worn just a small pannier over the hips under the skirts) often with an over skirt, and sleeves are tight and elbow length.

As I mentioned, Demelza has metamorphosed from a shabby boy and his dog, through to a dreaming kitchen maid, finishing as the lady of the house.

The moment when she appears, Poldark Style, dressed in Ross’s mother’s turquoise gown which she has nicked from a trunk is the moment she both gets laid and that her future is assured. Although Ross growls at her to take it off, he seems to feel very little “ick” factor is slipping it sensuously over her shoulders. And although it doesn’t fit her well, it seems that Ross’s mother was nearly the same size as Demelza too, and had a surprisingly up to date fashion sense.

However, although Demelza is a red head (and I’m sure that we’ll be hearing that sales of red hair dye have shot up thanks to her fiery tresses) the Poldark Style costume designers haven’t kept her in turquoises and greens.

Instead, she often appears in red and yellow: a yellow cotton for her kitchen maid outfit and yellow silk for her first outting in society, and a red cotton dress (which she is married in) along with a brown cloak with red lining bought for her by Ross which she strokes lovingly on the way home. This is followed by a scarlet silk for her to wear at Christmas. The shapes of her gowns are the same as Elizabeth’s, and in fact the same as every female in the Poldark Style series, from peasant to courtesan.

I don’t want to go without giving a tip of the hat to Aunt Agatha. She appears in a mourning dress of black silk throughout in Poldark Style, with a decidedly old fashioned looking bonnet with frills of white lace perched atop her curls. She finishes her look with fingerless mittens and a contemptuous remark or two for Francis.

Demelza has a pale green for travelling in. courtesy Mike Hogan/BBC.

Demelza as a kitchen maid in her yellow dress. courtesy Mike Hogan/BBC.