Beautiful white vintage wedding dresses – what can be a more apt symbol of a shy bride’s purity, chastity, and blushing youth?

The veil is the perfect finishing touch to hide her modest face as she happily steals glances at her husband to be.Of course, things are a little bit different now, and perhaps the bride is not entirely chaste before marriage these days – but it’s all so romantic to continue the tradition and dress in white!

Actually, dressing in white was a symbol of wealth and being the height of fashion. White fabric is hard to clean and in the past, a vintage wedding dress, even for the very rich, was worn regularly after the event.

Wearing white was just a way of saying, “I have a really good laundress who can clean this for me and, anyway, I don’t have to go anywhere dirty, what do you think my carriage is for?”

White was an en vogue colour for evening dress from the 1700s onwards.

The veil came into the costume in the 1800s as an extension of popular evening dress at the time. This, with its folds and draperies, was an homage to Greek statuary and often included a veil, worn at the back of the head. 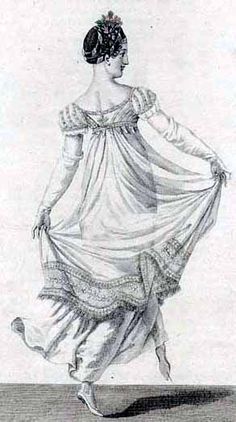 Regency evening dress – not a bride 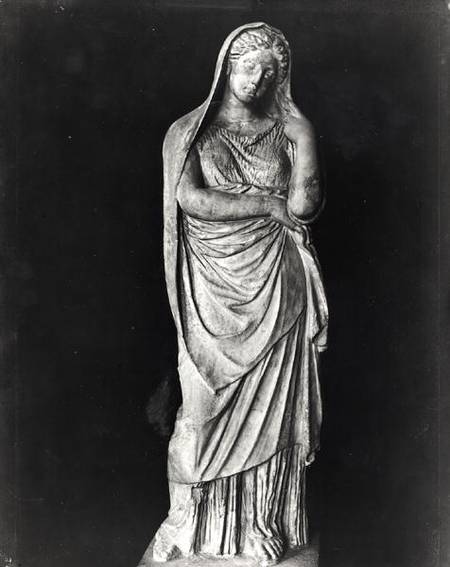 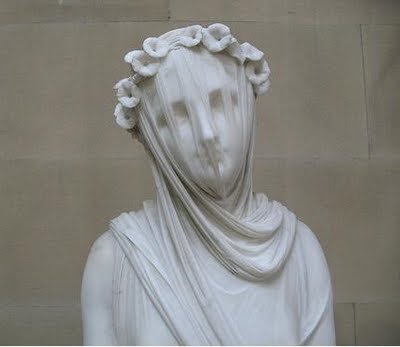 Neither is this-Vintage Wedding Dresses

Both white, silver, and white and silver together were popular colours. If white is expensive, how much more expensive is silver?

Right up the 20th Century, when the marvel of artificial fibres meant that most silver lamé is made from shiny plastic, silver was made from silver. So silver threads, silver tassels, and entire bridegroom suits made from silver weren’t tacky, they were breathtaking. 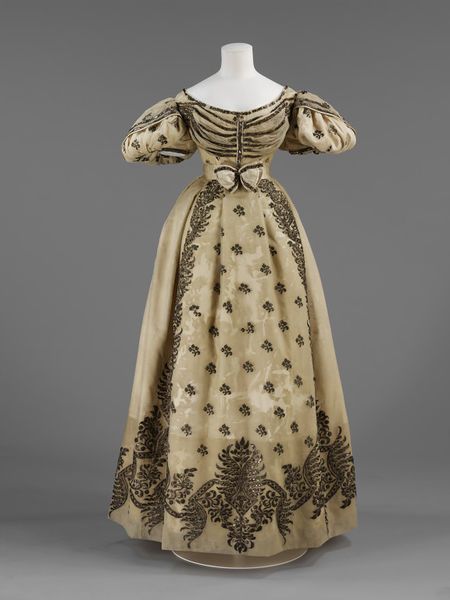 This silk wedding dress of 1828 is embroidered with silver strip – imagine if it wasn’t tarnished!

By the way, pompoms, tassels, sequins, fringes and floaty things that caught the light to make the bride shimmer and twinkle were a delicate and feminine addition. 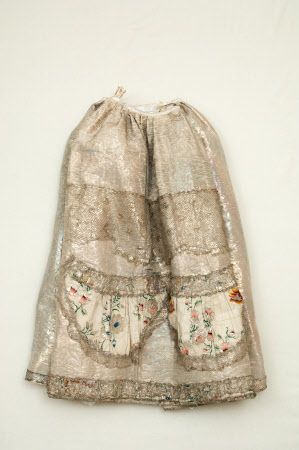 The bride is catching the light, not because she’s getting married in a somber church with a single dusty ray of light penetrating the gloom to single out her radiant loveliness, but because she has a special license, as many rich people were allowed, to have an evening wedding at a time that suits her, in her ancestral home, well lit by candles.

It’s more private that way and she can get away with a more daring outfit. Brides getting married in church had detachable long sleeves and often a lace chemisette, to cover the décolletage, which was later removed so that the dress could be worn as an evening dress. 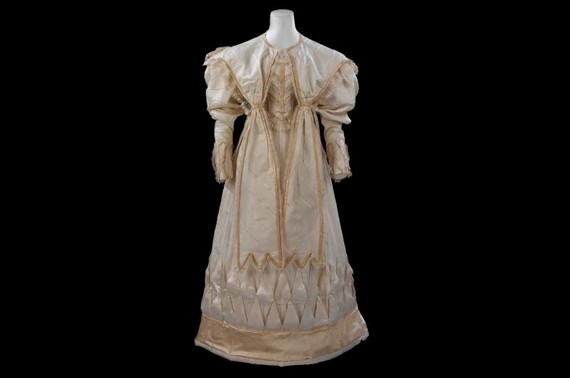 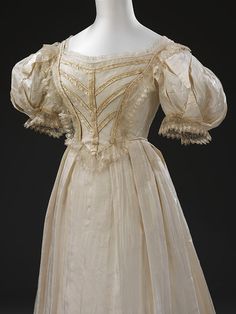 The cost of Vintage Wedding Dresses was mostly in the fabric, not in the making of the dress itself. So in 1724, 18 yards of silk was bought for a wedding dress at a cost of about £10,000 today. The seamstress received less than £100 in today’s money for her pains.

Even the rich didn’t always have a whole new dress for the wedding. This idea generally came in around Victorian times, with people wanting to echo the Ultimate Romance of the wedding of Queen Victoria and her “Precious Angel” (her words), Prince Albert. 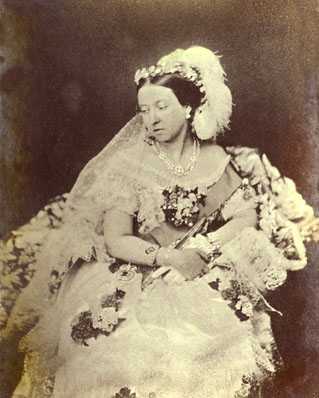 So, if you really want to be a traditional bride, and you’re not aristocracy, you should probably find your favourite dress, your equivalent of Sunday best (historically a colourful sprigged cotton is common) and wear that. Give it a good wash and add a bunch of fresh flowers. After the wedding, continue wearing it on high days and holidays until it wears out. 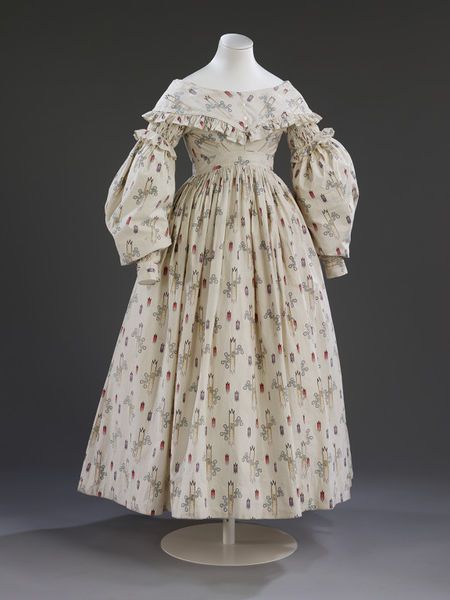 Most purpose-made historical wedding dresses were based either on current fashionable day dress, or later on popular evening styles with the colour changed to white or pale hues. This is because wedding dresses were generally worn again, and a wedding dress that was white, but in a current style, could be dyed or just worn as it was. Nobody really wanted a curiously out of date dress to go dancing in.This lasted until about 1950. Around this time wedding dress styles ossified into a generally old-fashioned influence.. 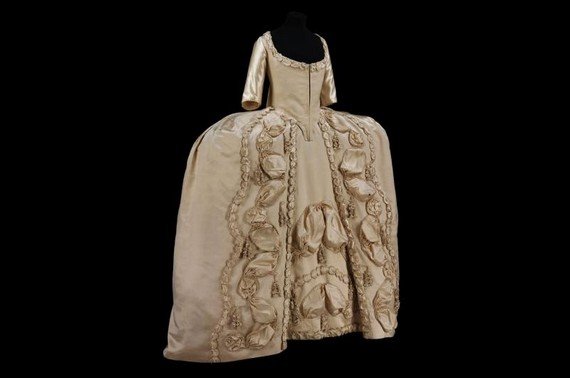 This dress is associated with a wedding and would either have been worn in a private ceremony or for the wife’s presentation at court afterwards. The wide side hoops were the height of fashion and it has tassels designed to flutter with movement. 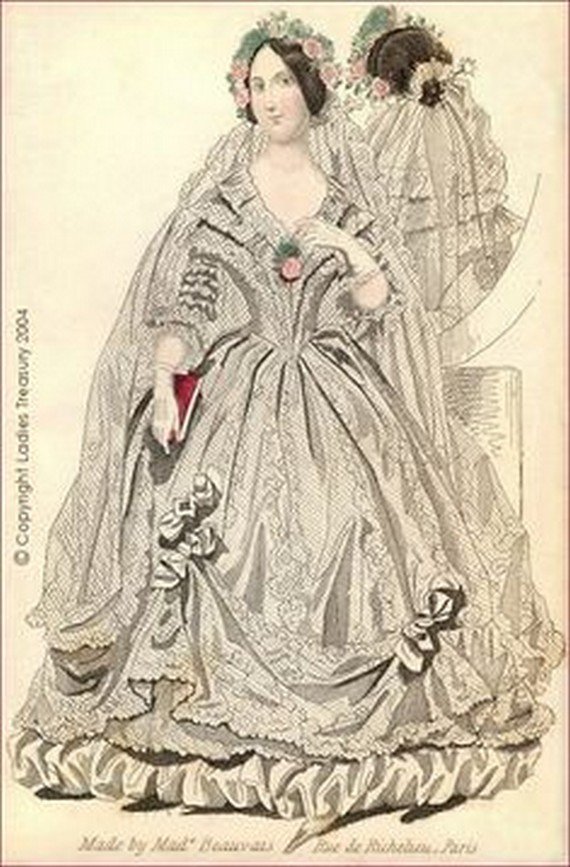 The above bride is generally echoing the style of Queen Victoria’s wedding dress. Queen Victoria wore Spitalfields silk from London and Honiton lace from Devon to stimulate British trade. (It worked.) Although this bride wore roses, Queen Victoria sported artificial orange blossom, a symbol of virtue and fertility worn by most brides of the period. Orange blossoms have a delicious scent, so imitation flowers were scented. They were made from either wax, paper or fabric, although wax ones were troublesome, tending to melt to the bride’s head. Myrtle leaves, symbolizing love and fidelity, were also popular.

Edwardian England longed towards the medieval in style and culture and wedding dresses, as a prime dressing up occasion, followed suit. 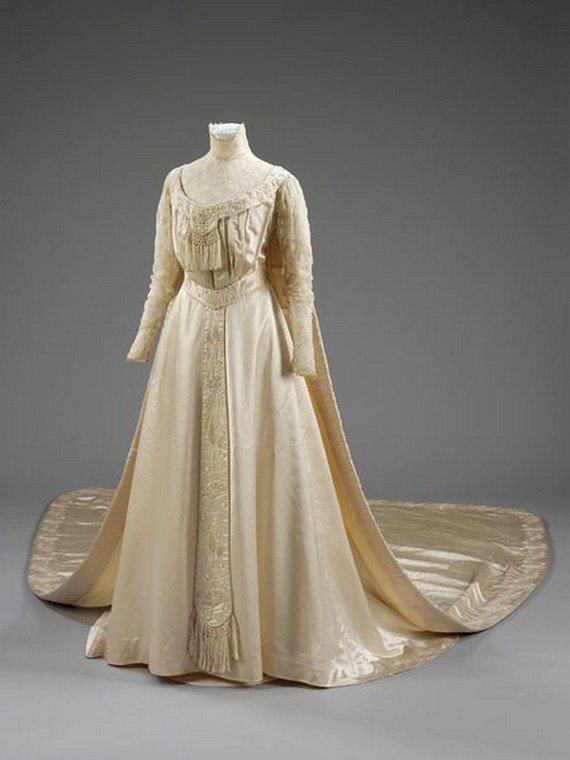 Wedding Dress 1905 made by Liberty Co

During the 20s, Royal weddings again set the trend, as Elizabeth Bowes-Lyon (our Queen Mother) was married in a veil worn low over the brow. 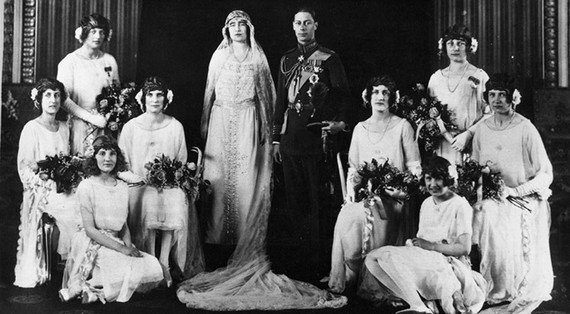 Elizabeth Bowes-Lyon and Albert, Duke of York. The loose dress is typical for the 20s. 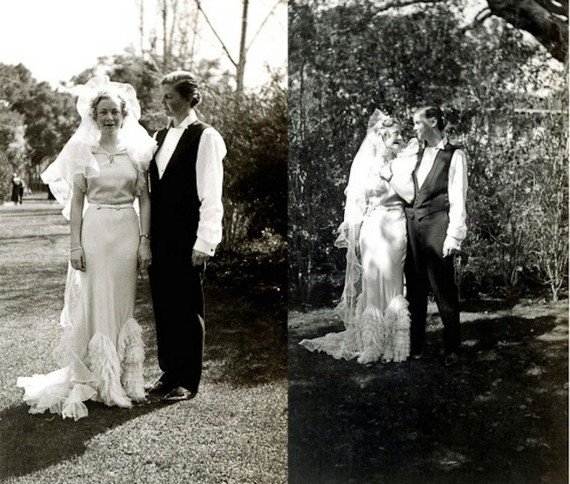 And here is a bride, two brides actually, in a typical 30s ensemble.

And here is a bride, two brides actually, in a typical 30s ensemble.

By the outbreak of war in the 40s, silk fabric was rationed and many either did not wear a special wedding dress, getting married in their existing clothes, or had one made from upholstery fabric which wasn’t rationed. 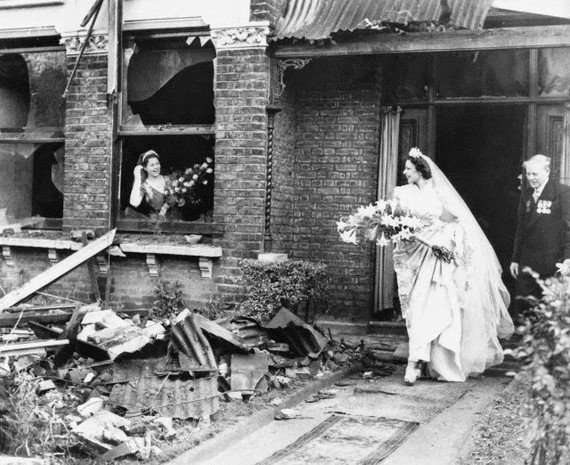 After the war, in the 50s, ready to wear flourished and so many brides bought their dress ready made. The styles, with a corseted waist and full skirt, were in fashion yet harked back to an earlier era. 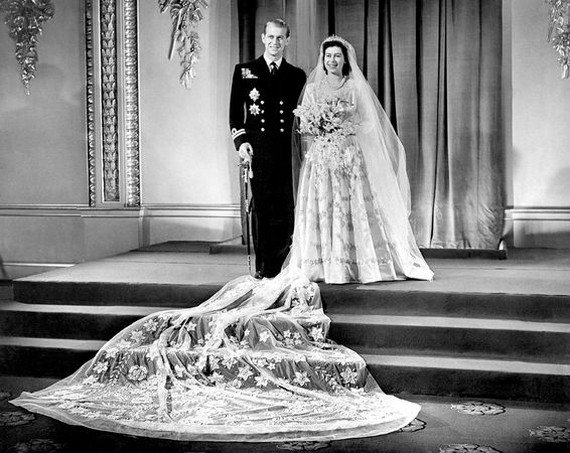 Queen Elizabeth gets married in 1947

Despite radical changes in fashion in the 60s, many brides stuck to the same style. 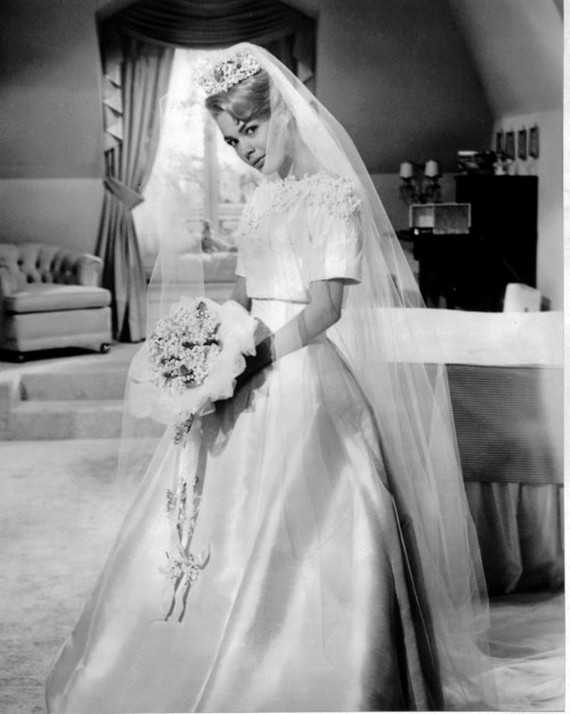 Although of course there were exceptions.

But in the end, traditional wedding dresses haven’t changed that much, through the 80’s:

Right up until the present day.