1970s Vintage Fashion is an excellent era for vintage hunters, because as it was both relatively recent, and had an extremely high proportion of nearly indestructible man-made fibres involved,lots of Seventies clothes still exist.

Really, you just need to check out the musical film of “Hair” to garner style tips for the decade. It gives you hippy tips galore. I’m joking. Supplement it with “54”, the film about the infamous Studio 54 nightclub, attended by the glamorous likes of Bianca Jagger, to get the full picture.

Hippy style was prompted in part by the greater availability of overseas travel. The first jumbo jet flew in 1970.

You might go to India and bring back strings of beads, or to Afghanistan to get your Afghan coat. All sorts of souvenirs of your travels in the form of clothing was popular, and it was all thrown together, regardless of ethnic origin.

Then, you need to add something you’d made yourself. A crocheted waistcoat or droopy knitted hat, made from natural fibres is good. That was prompted by ideas of crafting, being closer to the earth, not buying mass manufactured goods.

The idea was to make a counter cultural statement, so you didn’t want to look neat, tidy, or matchy matchy in any way. You were against all that. Long, unkempt hair or frizzy, unkempt afros looked pretty radical.

Flea markets were a popular hunting ground for retro articles. Alternatively, you could go with the Studio 54 look, and be groomed, shiny and matchy matchy. Halston made very sexy, very slinky dresses from flowing satin, narrow, floor length and often with halter necks. Ossie Clark in the UK made something similar in form. Yves St Laurent made amazing, feminine trouser suits.

For fun, really colourful clothing was in. Sonia Rykiel and Betsey Johnson made simple shapes, worn with stripy tights. Japanese designers, like Kenzo and Kansai Yamamoto created bold prints and clashing colours with a Japanese twist. Shorts got really short until they were hot pants. 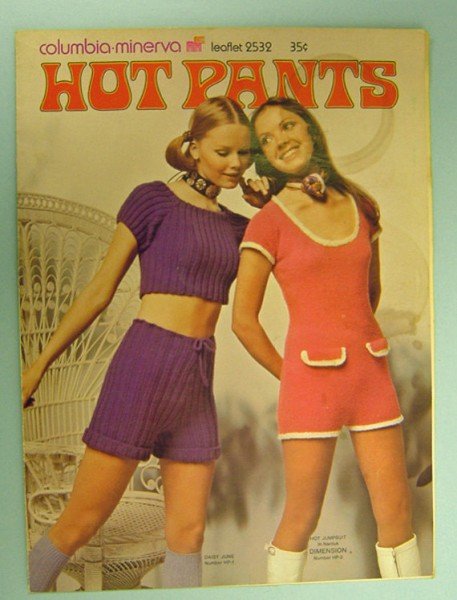 And for every day wear in 1970s vintage fashion, the rise of denim was unstoppable. Jeans with bell bottoms or flared hems started the trend, and their tendency to drag on the ground rendered platform shoes weirdly practical. But by the end of the decade hems were narrower, waists were higher and bleaching, fading, and precise creases were important.

Even more important, however, was the label on your jeans. It had to be visible, and ideally sport the name of Lees, Levis, or Calvin Klein. Double denim, in the form of jeans and denim waistcoats, or denim jackets, was a good look.