In 1910 you might have looked along the street and thought that much was the same as in the preceding decades – corseted figures and long skirts prevailed.But changes were afoot, as more and more women began to adopt more practical garments in 1910s fashion

The craze for bicycling had women in bloomers, generally with a short skirt on top, or sometimes, even men’s trousers. These were trends that were often ridiculed, and caused arguments and even the banning of their wearers from certain restaurants and fashionable hang outs. I have to point out that away from our fast fashion trends, fashion a century ago moved rather glacially. This particular innovation had been around for quite some time.

A bit like the bra burning of the seventies corsets began to be abandoned around this time too, or at least modified into lighter stays. 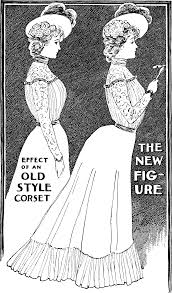 The silhouette is much less exaggerated than before in any case, and moves away from bustle and bosom into more of a column shape. 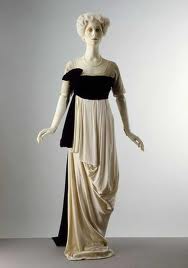 Then, in 1914, came World War 1. The war was another reason for clothes to abruptly become practical. Women found a sudden requirement to take on practical jobs, including both those that replaced the men away on the battlefield, such as tram conductors, and those that assisted them – nurses and Red Cross volunteers. They needed to move in an unhampered way. 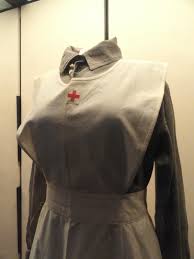 Utility made 1910s Fashion different because there was a also a shortage of wool and linen – wool was used for uniforms, and linens for the wings of airplanes. Women were advised to reuse and remake outfits, and design which used less fabric were prioritized. So sleeveless blouses became popular, and skirt hems were raised. Since silk wasn’t needed for the war effort, women turned to it with relief, along with gingham and calico.

This is where Chanel steps in. She wasn’t the first to make clothing based around this looser silhouette, and she didn’t invent the wearing of jerseys for women – but she massively popularized a more casual kind of chic for the upper classes. The French Breton sailor’s sweater – the marinière – was one of her signature looks, and she created pieces in soft jersey – simple dresses and skirts, too. 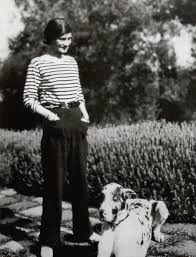 It’s an enduring look, as I’m wearing my favourite stripy sweater today, though it didn’t occur to me when I slipped it on I was paying homage to a fashion first seen in the First World War!