Break Factor is an intriguing meditation on textiles and thread, putting the fabric front and centre of the design process. The term is measure of yarn strength in textiles but this is not an exhibition about the relative merits of different fibres but a joyous exploration of texture and colour. And the form which thread takes: its coils and loops are blown up, magnified and echoed with overwrapping and strands which are then printed on textiles themselves and shown on video screens. 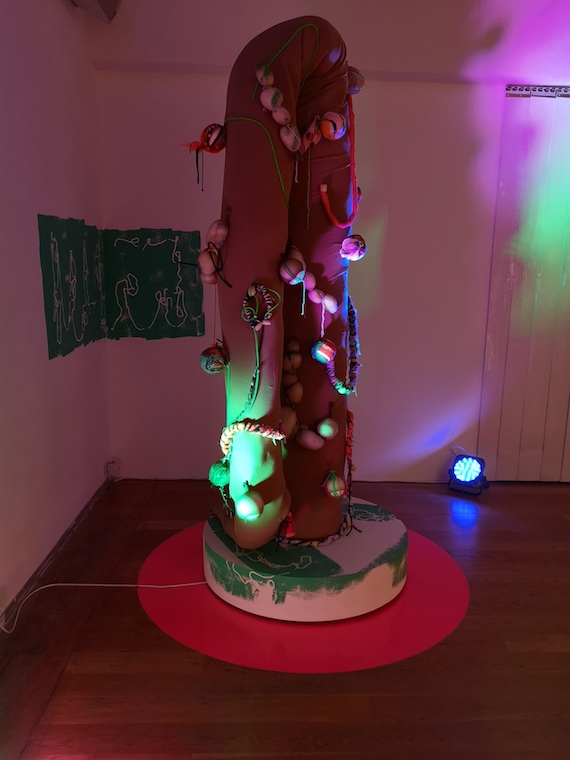 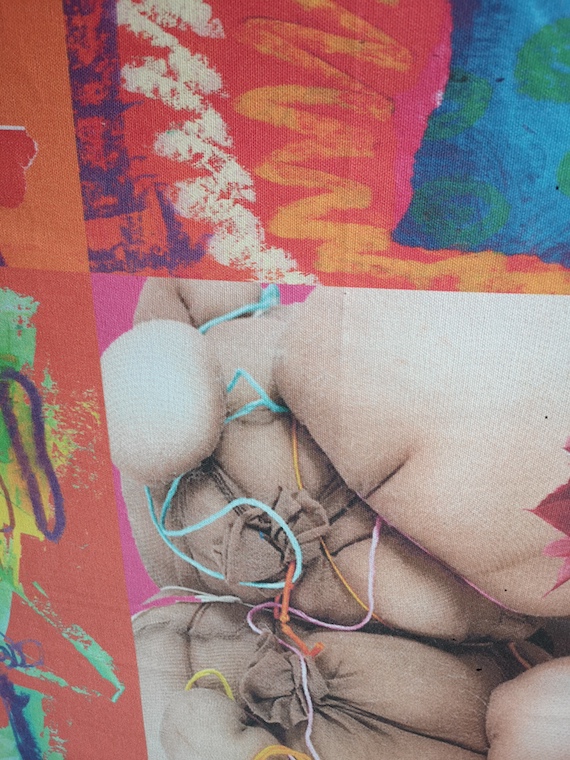 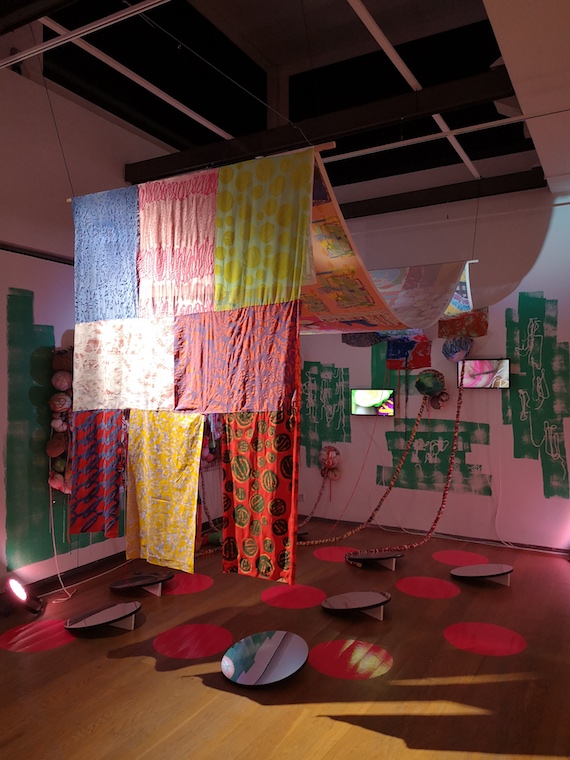 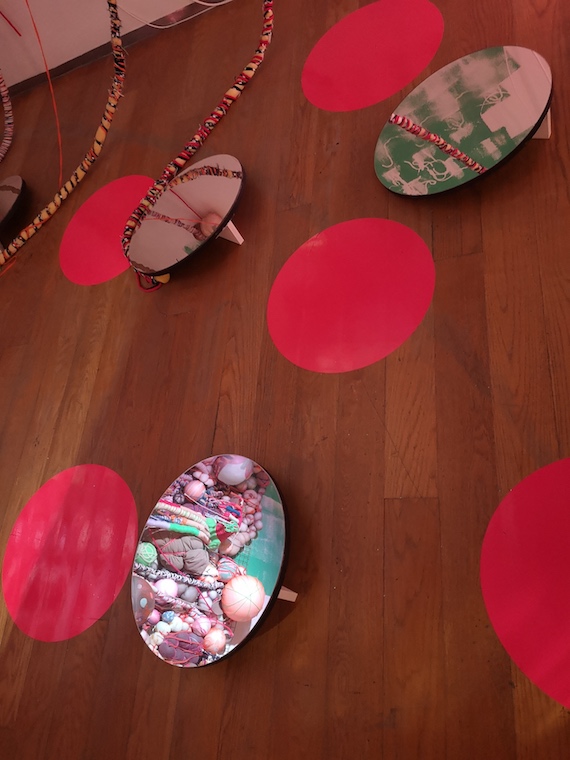 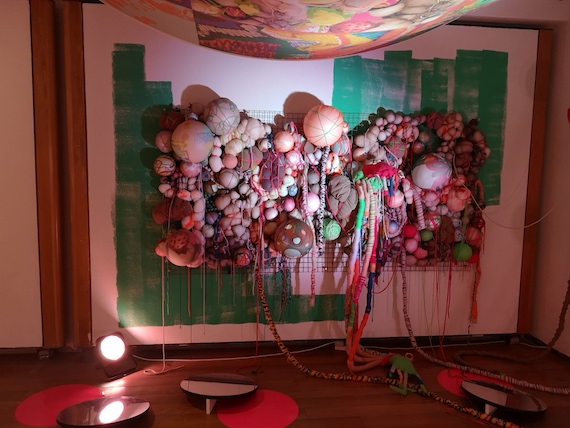 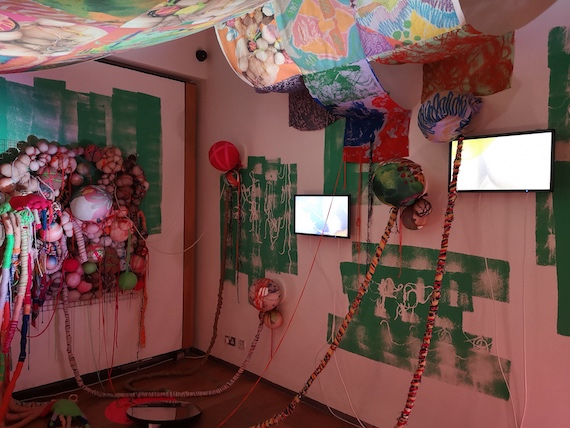 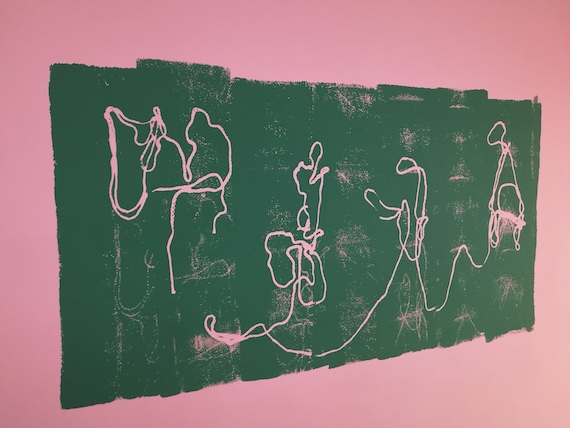 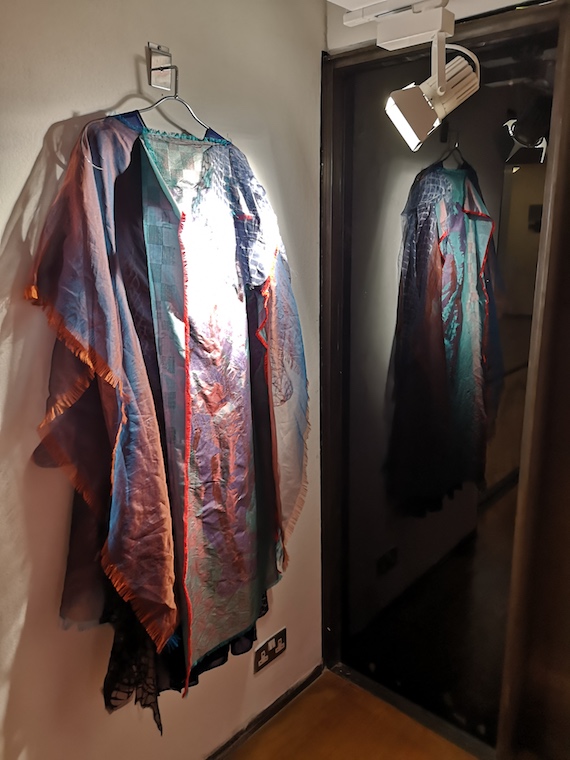 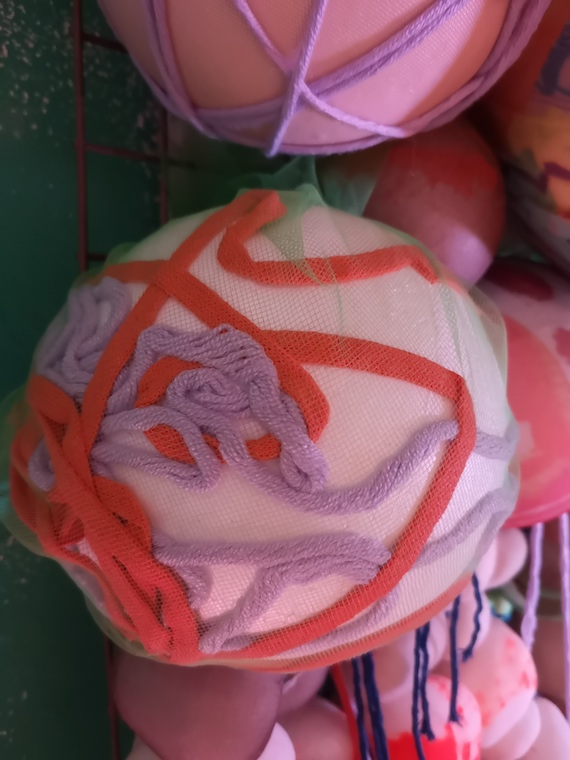 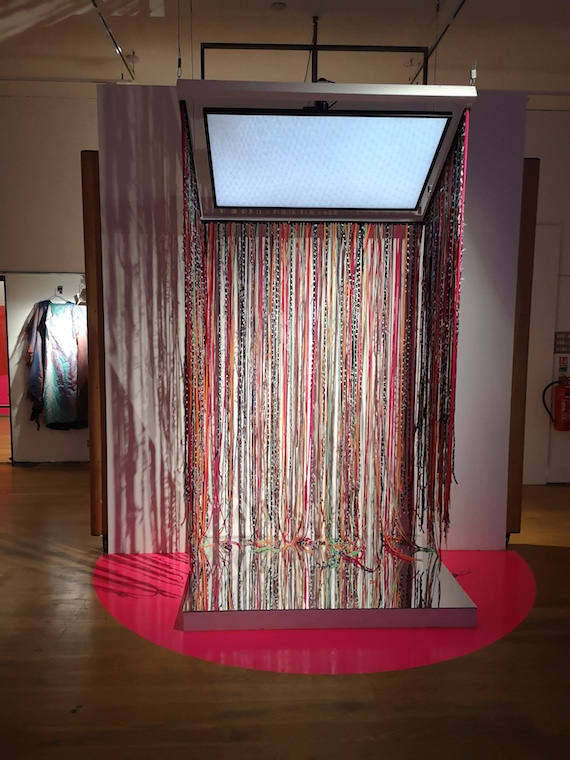 I have rarely seen a bad show at the Fashion Space Gallery, (although it can happen). I’ve come to believe it’s the space itself, although in appearances it’s nothing special. Just a room off a corridor at the London College of Fashion near Oxford Street, whose plate windows people often rush by, head down, not looking, engaged in the business of learning. My visits never last very long either, and in fact I often try and loiter a little longer to spare myself the embarrassment of signing in with the guest book and out again precisely twelve minutes later. There are never any other visitors either, probably due to its location, although I expect the openings are a blast.

But I think a new show at the Fashion Space Gallery is not to be missed and I’m glad I caught this one. It is curated by Polona Dolžan and a collaboration between the fashion designer Louise Gray, set designer Sarah McNabb, sound designer Shervin Shaeri, dancer Alethia Antonia, and final-year LCF BA (Hons) Fashion Textiles students Isabella Dunne, Advaitha Ravishankar, Rebekah Smith and Ying Zhang.

Lately, soundscapes have become a huge part of the successful ambience of a show. This one features some of the sounds of machinery used in the production of textiles: sewing machines and silkscreen squeegees, for example. There is also the sound of boiling water intercut with flute music. As you can imagine, the effect of this in the background is impressively sinister. There isn’t a credit for the lighting design but it, too, plays a part: the room is dim but atmospheric. Coloured spots pic up the detail of a huge sculpture which is somewhere in between Sarah Lucas’s stuffed tights and Rebecca Warren’s feminine forms. It is studded with parasitically crawling forms, and in this case, the loops and fabric covered spheres look like nothing so much as insect eggs and larvae.

Across the space is a huge mesh has sprouted with these shapes. A video playing shows dancer Alethia Antonia interacting with it, sometimes caught in the strands, sometimes cuddling its offshoots as if she’s caught in the web of a particularly messy spider that she nevertheless is quite fond of. The image of this installation is reflected in a celling hanging, printed with a photograph of it. It is also literally reflected in circular mirrors set on the floor.

The idea is to deepen the experience with 3D installation echoed by digital print. Sarah McNabb, the set designer, explained that she is more used to working with tempirary sets used as a background for performance, and so it was a challenge to create a more lasting set that would stay and be viewed when the performer has left. It seems to have achieved its purpose, since as a gallery installation it is intriguing.

The enormous threads themselves might reference traditional crafts, as they are formed much like traditional rag rugs are made, with scraps of fabric caught and rolled in thread. They sometimes have a great deal of thread when they tend to resemble embroidery-floss wrapped dreadlocks. The designs are inspired by traditional embroidery techniques which are enlarged, and the set design informed the costume design.

Paintings on the Wall

There are paintings made directly on the wall, using squeegees which have scraped paint across threads which are then removed, leaving their ghost-selves behind. A fringed screen reflects itself in a mirror on the floor. And a costume hangs in a corner, made from layers of shredded chiffon.

It is part of the costume which Antonia wears to perform in. She performed a series of dance pieces throughout the run. Creating her outfit, which was composed of a bodysuit, a bias cut dress, a tunic and a 3-D structured stole, was a new challenge for teh students. They needed to consider making not just clothes, but clothes that a dancer could move in and that was reflecting during the design and fitting pocess. The layers of transparency held diffeent textile prints which were arranged in a deliberate way in relation to the body. It was important to the designers that they achieve both gender-neutral colours and a gender neutral silhouette.

Louise Gray has facilitated the students to explore thier ideas about textiles. Her own creations, as a designer who has appeared in London Fashion Week numerous times, is similarly wild and colourful. She, too, uses layering and untamed edges to her work. Yet this come across as no copy, but clearly a collaborative effort between all. The ideas are beautiful, creepy and atmospheric. I would not be surprised to see these students’ work on the catwalk themselves in the very near future.