Pulling off that 40s mens fashion look is easier than you think!

Whether it’s with a collared shirt and matching necktie, or a double-breasted jacket or blazer and knitted tops – 40s mens fashion is back in vogue and still going strong.

Iconic 1940s fashion images include the indomitable double-breasted jacket and baggy Zoot-inspired suits. If you were a working-man in the 1940s, you were also most likely to be seen wearing a collared shirt and tweed slacks. And more likely than not, your spin on casual 40s mens fashion would include a wide-brimmed hat and a chequer scarf around your neck to go with your navy blue jacket.

But such liberties weren’t visible just a few years prior to the 1940s. WW II, which started in 1930 and ceased in the mid-forties, meant that 40s mens fashion didn’t come into its own until around 1945. 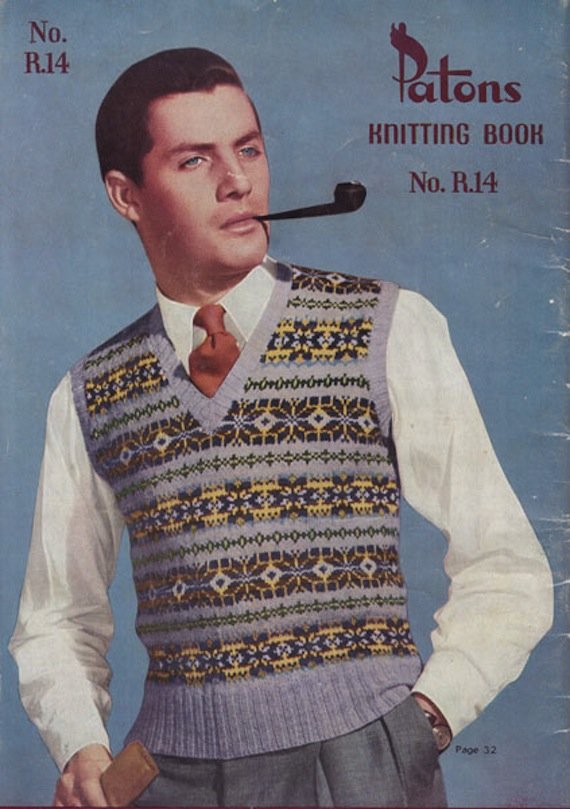 What…? I hear you shout. Tank tops…for gentlemen? That’s absurd!

Well, technically 40s mens fashion was really the harbinger to what is now commonly known as tank tops.  But in the 1940s, this piece of men’s fashion wear was called a slipover. Unlike modern-day tank tops, which have acquired a “gangsterisc” reputation (called “wife beaters” in the USA due to their predominance in American wife-abusing gangster movies), this gentle outerwear from 40s mens fashion was a very noble piece of clothing.

Typically, they represented knitted-by-hand Fair Isle pieces that men often wore underneath a double-breasted jacket or suit. If you’ve ever watched a 1940s movie, you’d probably spot every male character donning tank tops over a collared shirt and tie.  A navy blue jacket, complete with a hanky stuffed in the breast pocket of the jacket, would often round off the look.

Fast forward to later decades, and the tank tops that you see are far different from what were an integral part of 40s mens fashion.  Bruce Willis in his Die Hard roles, and George Michael on stage, epitomize how tank tops no longer need to be paired with a pointy collared shirt or a necktie. Even female action-figures, like Angelina Jolie in her Lara Croft roles, can now be seen in tank tops.

Today, however, it’s easier than ever to pull off that 40s mens fashion look wearing tank tops. On a chilly day, you could still wear tank tops then under a double-breasted jacket or blazer. You don’t even need a necktie to pull that look off. Just wrap a scarf or bandana around your neck – and off you go! 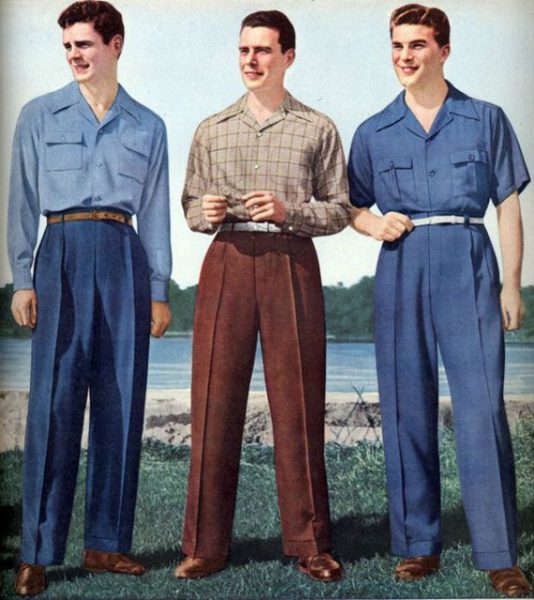 Shirts with collars are almost taken for granted today. Everywhere you go, you’ll see men sporting a collared shirt for every occasion.  In fact, if there is a single piece of 40s mens fashion that’s left an indelible impression on how men dress, it’s the ubiquitous collared shirt.

Typically, today, as was customary for men in the 1940s and even later, men prefer shirts with collars for most formal occasions. 40s mens fashion was no different. You would often see a man dressed for work, wearing either a suit, or perhaps slacks and a sleek double-breasted blazer. Underneath though, there was always a collared shirt.

The beauty of 40s mens fashion, which popularized shirts with collars, is that they are extremely versatile. If you had a navy blue tweed dress suit on for work, for instance, you could easily pair it with a pale blue or white collared shirt.  Usually, along with a suit and collar, came a necktie. You could also colour-combine your tie with your shirt.

When it came to shirts with collars, a double-breasted blazer also afforded great pairing opportunity. Blazers, which were a hallmark of 40s mens fashion, were routinely worn over a collared shirt. This look provided men in the 40s an ideal way to be formal and casual at the same time.

Picture a man in a navy blue blazer or a double-breasted cotton jacket, over a white or pale grey collared shirt. A favourite 40s mens fashion look would have men wearing a necktie, for formal occasions, or a scarf around their necks, under their collared shirt and blazer. Alternately, they would insert a handkerchief in the breast pocket of their double-breasted jacket to complete their work and play look! 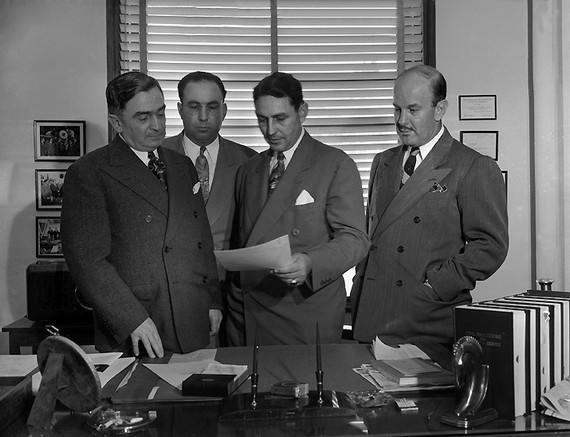 When it came to men’s tops, 40s mens fashion offered great flexibility is dress choice. Among the most sought-after piece of outer wear was the double-breasted look.

The 1940s man was hardly ever seen without a suit. Whether it was for work, or to go to church or other social events, high-waisted pants and double-breasted jackets were a staple. 40s mens fashion brought about a slight revival of Zoot too, with pleated baggy trousers and hats with wide brims.

While 30s fashion favored narrow cut jackets, coats and blazers, 40s mens fashion was more about wider cuts. That’s why double-breasted suits were especially endearing to men in the 40s – because it made them look “bigger” than a single breasted coat would.

Typically woven from tweed or worsted wool, the navy blue blazer was a particular favourite among men. This double-breasted classic was usually worn with a pair of knitted or worsted grey pants, over a plain white or neutral coloured collared shirt.  Iconic casual mens fashion look might also include a stripped shirt under a double-breasted coat, with the slacks held up by suspenders.

The buttons on the navy blue jackets were usually gold, which made them stand out in contrast with grey or black pants.  In the 40s mens fashion isles of many vintage clothing stores, you may also find double-breasted jackets and coats with shiny silver buttons – usually three or four on the breast and chest, and three on the cuffs.

Of course, 40s mens fashion tops weren’t just reserved for navy blue blazers and jackets. You could see men wearing formal double-breasted suits too, including plain or striped versions.  Typically, men wore their suits over plain white collared shirts, with ties and breast-pocket handkerchiefs.  Unlike today, when more close-cut designs are in demand, 40s mens fashion was all about looser, wider cuts.